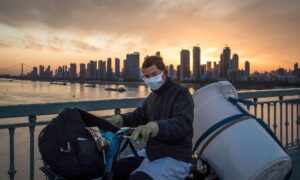 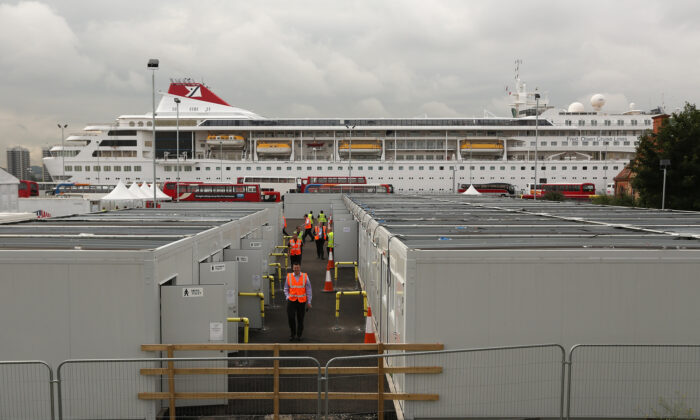 A transatlantic cruise ship carrying more than 600 passengers with at least five confirmed coronavirus cases on board is frantically searching for somewhere to dock after it was refused entry at multiple Caribbean ports.

British officials have launched an intense diplomatic effort to find a country willing to take the MS Braemar, which belongs to the British company Fred Olsen Cruise Lines. Twenty passengers and another 20 crew members, including a doctor, are in isolation after displaying influenza-like symptoms while traveling on the the ship.

The Braemar is anchored about 25 miles offshore in the Bahamas waiting for clearance from the local government to bring aboard vital food, fuel and medications and two doctors and two nurses who are preparing to assist the onboard medical team.

The vessel, which is carrying 682 passengers and 381 crew members, arrived in the Bahamas on Saturday. Authorities there were the latest to prevent it from docking but was given permission to drop anchor southwest of Freeport.

“No other Caribbean ports were willing to accept the ship because of local sensitivities towards COVID-19 coronavirus,” the company said in a statement.

British government sources familiar with the efforts to find a suitable port for the Braemar told CNN that the UK is in discussions with authorities in Cuba and the US, with Cuba looking the more likely option. A plan to allow the ship to sail back to the UK was ruled out on practical grounds due to the distance involved and the health of the passengers.

A Fred Olsen spokeswoman told CNN that all options on where to go were being considered, including returning to its starting point in Southampton in the UK.

“We are exploring a number of opportunities and working extremely hard to find a resolution,” she said. “It is an option to do a transatlantic crossing but we need to weigh that up against other options.

“The key thing for us is to get guests home as quickly and as safely as possible.”

Keith Livingstone, whose wife Suzanne has been on board with a friend since February 12, has been keeping in touch with her as much as possible with unreliable internet connections.

“Whilst spirits are high the lack of information and any decision as to what may happen is beginning to concern,” he told CNN from Northern Ireland. “The crew from the Captain down have been fantastic by all accounts but they seem to be as much in the dark as anyone.

“The lack of information is leading to speculation, which leads to rumors, which then become fact to some.”

He said most passengers were elderly, which was “leading to anxiety levels rising the longer the situation is unresolved,” adding: “The Voyage of the Damned continues.”

Passengers have been advised to self-isolate and contact the ship’s medical center if they felt unwell. The ship’s bars and restaurants remain open. The UK’s Foreign & Commonwealth Office wrote to all British nationals on board on Saturday, advising them to follow the cruise firm’s guidance. Two officials are in Freeport offering support to the Bahamian authorities.

“We are working intensively with Fred Olsen Cruise Lines and the authorities in the region to urgently make arrangements to get British nationals safely home,” the FCO told CNN in a statement. “The ship is being resupplied in the Bahamas. We are ensuring medical supplies are available—including by funding resupply by helicopter.”

The cruise line was unable to drop passengers on its Caribbean cruise in La Romana in the Dominican Republic on Feb. 27 after a number of influenza-like cases on board were reported.

Instead, it made an unscheduled stop in St. Maarten on March 2 to allow passengers to disembark and take the cruise’s charter flights back to the UK. New passengers boarded and the vessel set sail for Jamaica as it continued to the Western Caribbean and Central America. It was due to continue to Costa Rica, Panama, Colombia, Curacao, and reach Barbados on March 12.

On Monday, March 9, the company reported that two people who had been on the Braemar were diagnosed with the coronavirus after returning home. Six people reporting flu-like symptoms on the ship were tested, and five cases were confirmed on Wednesday—four crew and one passenger—with another inconclusive result.

The ship was unable to dock at the island of Curaçao on Tuesday or Barbados on Thursday and changed course to the Bahamas, its flagged state, with the intention of allowing passengers to disembark there.

The captain told passengers in an announcement that he was in talks with local authorities and asked passengers to “bear with me in this incredibly frustrating time, where rumor is plentiful and facts are in short supply.”

Peter Deer, managing director at Fred Olsen Cruise Lines, on Sunday thanked Captain Jozo Glavic and his crew “for working so hard for so long in very challenging circumstances” and thanked passengers for their patience. “We have been working around the clock with the Bahamian authorities to get supplies on to the ship but it is taking longer than we expected to get the necessary clearances,” he said.

Deer said the company had “acted on the best advice available” when it boarded passengers in St Maarten on March 2. “No one who joined the ship declared illness, and no passenger had traveled to a high-risk area nor been exposed to anyone with COVID-19 coronavirus.

“Anyone remaining on the ship had been in the Caribbean for at least 14 days and there had been no known instances of the virus in the region.”

He said the flights from the Dominican Republic were authorized by the UK authorities and none of the passengers were quarantined on their return to the UK.

Fred Olsen Cruise Lines said it was addressing the “challenging and changing situation” from its headquarters in Ipswich, England, in consultation with authorities in the UK and the Bahamas. “This must be a very worrying time for our guests on board and their families,” the company said, adding, “we find ourselves in an unprecedented situation.”

The firm has canceled all cruises until May 23.

The Bahamas Ministry of Transport said in a statement that the “cruise ship will not be permitted to dock at any port in The Bahamas and no persons will be permitted to disembark the vessel” but said the government would “provide the Braemar with humanitarian assistance.”

“They will be in The Bahamas for a short period while the ship is refueling and the Braemar will leave The Bahamas immediately thereafter.

“The Government of The Bahamas reaffirms its continued commitment to take action in the best interest of the public health and safety and well-being of the Bahamian people and residents of The Bahamas.

“Our thoughts and prayers continue to be with the people who have contracted the coronavirus and who are at immediate risk.”