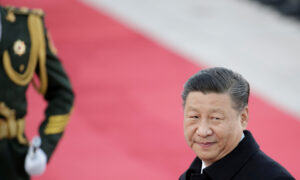 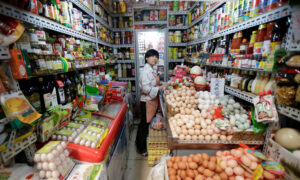 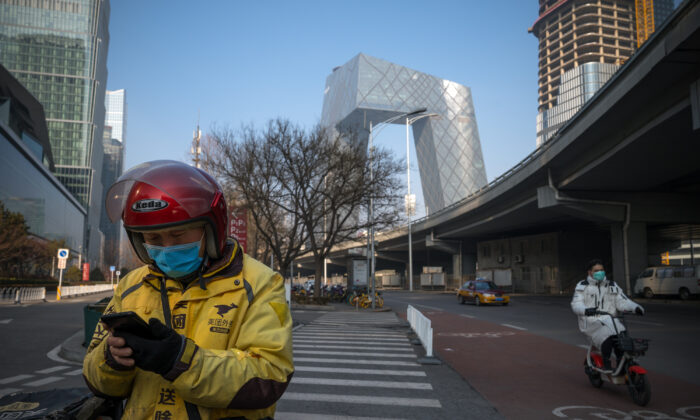 A delivery man uses his phone in the streets of the Central Business District in Beijing on Feb. 10, 2020. (Andrea Verdelli/Getty Images)
China Business & Economy

The Chinese Communist Party’s highest governing body seems to believe the country is still on track to achieve its 2020 goals despite the current coronavirus (COVID-19) outbreak.

Party leader Xi Jinping reemphasized that the outbreak will not stop China from meeting its social and economic objectives this year and urged authorities at all levels to ensure this, according to minutes from the Feb. 12 Politburo Standing Committee meeting reported by state media Xinhua.

But outside the confines of the Party headquarters at Zhongnanhai, economic realities paint a vastly different picture.

This impossible mission of balancing growth while containing a deadly virus makes China’s past economic juggling seem trivial. Domestic economic activity has come to a complete halt in much of China. The week of Feb. 10 was when most businesses were scheduled to reopen their doors after the Lunar New Year holiday, but not many did.

Meanwhile, the financial markets seem inoculated from these risks. Even in China, stocks rose almost as much as death counts from the virus. Absent actual economic metrics, perhaps investors are staying the course—or at least staying optimistic.

China’s first-quarter GDP growth will be closely watched. Any official reading other than a negative growth figure could raise eyebrows. Scott Minerd, Chief Investment Officer of Guggenheim Partners, suggested on CNBC that first quarter GDP could be as low as negative 6 percent on an annualized basis.

So far, there have been some anecdotal and economically indicative clues that China is experiencing an economic collapse.

At a macro level, the transportation industry is reeling. The Baltic Capsize Index, which tracks the cost of freight shipping for dry bulk commodities, fell to its lowest levels on record in the first week of February. The index is a key indicator of global trade. It had been falling since December but really cratered during January and early February, mainly driven by excessive shipping capacity as a result of the virus outbreak.

On the ground, the picture comes into better focus.

We can benchmark daily economic levels by observing power consumption and passenger traffic. As of Feb. 13, or 20 days after the Lunar New Year, daily power coal consumption across China is approximately 50 percent lower in 2020 compared with 2016–2019 averages during the same time frame, according to research by investment bank Morgan Stanley. Daily coal consumption is a good proxy for electricity usage and manufacturing levels, a live indicator of economic activity.

Reduction in daily nationwide passenger traffic data is even more stark. On Feb. 13, or 35 days after the Lunar New Year travel rush, passenger traffic volume remains only 25 percent of levels observed last year, according to Morgan Stanley. Traffic congestion is typically an indicator of commerce and transportation activity, and at 25 percent of normal levels, this suggests that much of China is on lockdown and economic output remains halted.

The health of the real estate industry—a barometer of household wealth—is also in a slump. Property sales levels in 30 major Chinese cities are only 10 to 20 percent of the levels seen from 2017 to 2019, according to data from Capital Economics. This is putting major pressure on a sector already slowing since 2019.

Bloomberg reported that the southern city of Shenzhen, which has more than 22 million people, has banned home sales altogether “as long as city authorities have the alert level set at the highest response.” And in Beijing, usually a hot property market, less than four units per day were transacted. Some developers have turned to virtual showings and online sales models.

Assuming depressed levels of sales activity will continue for as long as the risk of the virus remains elevated, this could severely damage the real estate industry. Highly leveraged developers sitting on unsold inventory could be at risk of insolvency.

January also saw a massive uptick in inflation. Constrained supply chains have crimped the supply of goods. Department and grocery stores in hard-hit areas are experiencing low inventory levels due to transportation restrictions as well as production stoppages around the country. Store shelves are sitting empty and prices are high.

Official readings from the National Bureau of Statistics reported that the consumer price index in January soared to 5.4 percent annually, the highest level in eight years. Food prices typically surge right before the Lunar New Year and then ease. But in 2020, China’s Food Wholesale Price Index has trended higher even after the holiday period, running about 5 percent higher than 2019 levels and 10 percent higher than 2018 levels, according to data from Capital Economics.

Even e-commerce giant Alibaba Group Holdings, a symbol of indefatigable Chinese consumer might, issued warnings regarding the virus’s impact to the company’s financials and consumer demand.

“The epidemic has negatively impacted the overall China economy, especially the retail and service sectors,” said Alibaba CFO Maggie Wu during a conference call with Wall Street analysts on Feb. 13. Alibaba also outlined measures—mostly through its lending arm, Ant Financial—to support small and medium-sized enterprises, which have been most severely impacted by the virus outbreak.

Downside Risks Not Priced In

So far, onshore financial markets have largely brushed off virus worries. Investors appear to be stuck in a state of complacency, either believing the outbreak will end shortly or expecting Beijing regulators to flood the market with stimulus should the situation worsen.

Surprisingly the Shanghai Composite Index, China’s benchmark equity index, is down only about 5.5 percent since Jan. 1. The smaller and technology-focused Shenzhen Component Index is even up on the year, rising 2.6 percent since Jan 1.

Stock analysts are disseminating tips on which stocks to buy “when the coronavirus is contained.” Traders speculate that China’s so-called “national team” of government-backed asset management companies and brokerage firms would flood the market with massive buy orders should stocks turn south.

“Investors who missed last year’s bull run are taking advantage of the correction to get onto the ride,” Huang Wei, a former trader who recently set up a forum on WeChat to offer stock tips to retail investors, told Reuters recently. WeChat is China’s most popular social media platform. After all, the 2003 SARS outbreak was barely a blip on the radar for Chinese stocks.

But is this exuberance rational?

The picture will get clearer when corporations announce first-quarter 2020 earnings. But compared with the barren streets, highways, and transportation hubs, China’s bustling stock market seems bizarre.

But perhaps it’s not so hard to understand. After numerous past bailouts and stimulus measures, Beijing has spoiled today’s investor community. Their Pavlovian responses today reflect that complacency.

And if the virus is a true “black swan” event, they are in for a rude awakening.