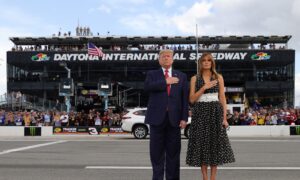 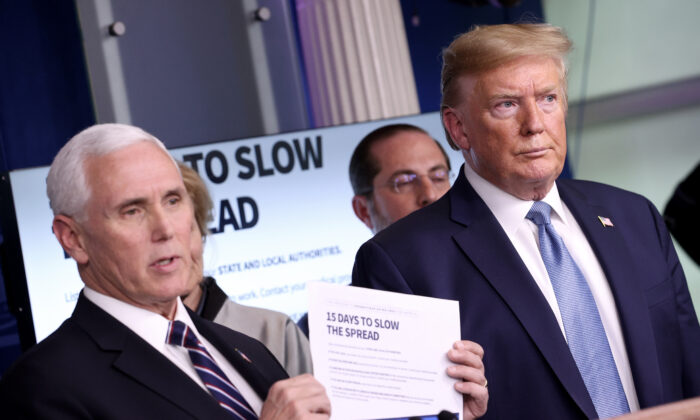 Vice President Mike Pence, joined by members of the Coronavirus Task Force, and President Donald Trump speaks about the coronavirus in the press briefing room at the White House in Washington on March 16, 2020. (Win McNamee/Getty Images)
Viewpoints

It was bound to surface soon and now it has: Eastern European specialist and veteran commentator and editor Anne Applebaum has written in The Atlantic (March 15) that the coronavirus crisis demonstrates that the United States has faltered, and is no longer a leading nation in the effectiveness of its government.

“The Coronavirus Called America’s Bluff” is the headline, and the conclusion is that “the United States, long accustomed to thinking of itself as the best, most efficient, and most technologically advanced society in the world, is about to be proved an unclothed emperor.”

I don’t think so.

Applebaum (a cordial acquaintance—at least as far as I am concerned—for 25 years, and a respected and talented writer) writes that the American bureaucracy, though not as authoritarian as that of China, was just as oppressive and profoundly mistaken in its response to the first cases of the coronavirus.

She is a hard-core Trump-hater who considers the president devoid of any good qualities or useful accomplishments and will go to demiurgic lengths to disparage and convict him. In this article, she coyly suggests that the first person to identify the coronavirus in the United States was stopped from sounding the public health alarm by federal bureaucrats who “may have felt political pressure not to take this disease as seriously as they should.” It “cannot be denied” that ”the president himself did not want the disease talked of too widely, did not want knowledge of it to spread.”

The basis for this outrageous innuendo is Dan Diamond, a writer at Politico, a site just as rabidly Trumpohobic as The Atlantic and Applebaum herself.

Diamond said, “My understanding is that [Health and Human Services Secretary Alex] Azar did not push to do aggressive additional testing in recent weeks and that’s partly because … the president made it clear—the lower the numbers on coronavirus, the better for the president, the better for his potential reelection this fall.”

I’m naturally familiar with the views of the president’s most virulent critics, and there is certainly room for plenty of criticism of him, but I was astounded to learn that they think he’s such a lobotomous imbecile that he discouraged testing for the coronavirus because he believed that would effectively prevent publicization of the spread of the illness in the United States.

This sort of Trump derangement is a more exotic ailment than the coronavirus.

Applebaum, in virtually assimilating in effects—although not in the severity of methods—the Chinese and American governmental systems, asserts that “our system is in far, far worse shape than we have hitherto understood.”

Again, I don’t think so.

He intervened to suspend direct flights to the United States from China in January (and was accused by the likely Democratic presidential nominee Joe Biden, of “racism” and “xenophobia”). He has declared a national emergency and approved an entirely public, bipartisan program, operated by the country’s leading specialists in the relevant fields of infectious diseases, epidemiology, and public health services, designed to maximally protect the public and combat the disease.

There are daily press briefings conducted by the vice president; there has been no dissembling, and the contrast couldn’t be more stark with the shameless mendacity of the government of China, which has never uttered a truthful word about the coronavirus pandemic, for whose exportation to the entire world it’s largely responsible.

All indications at this point are that the United States is rivaled in the efficacy of its response to the coronavirus, among comparable countries, only by South Korea, Japan, Germany, and Canada, which are doing about equally well. Premature judgments of such unpredictable phenomena are hazardous.

A Change of Mind

After a few more donkey kicks at the president, Ms. Applebaum’s piece moves onto her main theme: “But some of what we are seeing is unrelated to Trump. American dysfunction is also the result of our bifurcated health care system … the present crisis is the result of decades of underinvestment in civil service, of undervaluing bureaucracy in public health and other areas, and, above all, of underrating the value of long-term planning.”

Biden, former President Barack Obama, Sen. Bernie Sanders, Sen. Elizabeth Warren, and Hillary Clinton are right after all: the country needs a larger and more expensive and powerful public sector. The last time I discussed taxing and spending with Applebaum, she was, (and so was I), a supporter of President Reagan’s proposals for spending and taxing less and seeking private sector solutions to many of these problems.

She’s certainly entitled to change her mind, and the argument she’s making is a respectable one. Presumably, she would admit, if only out of nostalgia for her former views, that honorable dissent from her present proposed cure also is possible.

She is on higher and safer ground with her conclusion that “Part of the deep background of this crisis” are “the other familiar pathologies: the profound polarization; the merger of politics and entertainment; the loss of faith in democratic institutions; the blind eyes turned to corruption, white-collar crime, and money laundering; the growth of inequality; the conversion of social media and a part of the news media into for-profit vectors of disinformation.”

The profound polarization and loss of faith in democratic institutions are because of the belief fervently held by a numerous enough segment of the voters to put the incumbent in the White House that the 20 years prior to his election were a disaster of endless, purposeless war, an immense humanitarian tragedy of millions of refugees, the worst financial crisis since the Great Depression, the Clinton pay-to-play corruption, and the entrenchment of a self-perpetuating, bipartisan political-media-academic-Hollywood, Wall Street, and Silicon Valley elite that took good care of itself and let the “deplorable” half of the country be damned.

It was the intellectual corruption of the national political media that caused Trump to respond through social media, and the greatest blow to Democratic American institutions since the Civil War was the Obama-Clinton politicization of the Justice Department and intelligence agencies, to try to fix the 2016 election and overturn its result.

The Precedent of Japan

I would be remiss if I failed to mention that Applebaum’s historical precedent for the blinding revelation of America’s ghastly institutional infirmity produced by this pandemic is, believe it or not, Commodore Matthew Perry’s opening of the ports of Japan on the orders of President Fillmore—although Franklin Pierce was by then the president—in 1853. This intimidated the Japanese, convinced them of their primitiveness, and caused the Meiji Restoration of 1868, which “brought Japan, for better or for worse, into the modern world.”

The millions of people barbarously oppressed by the risen Japanese in China, Korea, Taiwan, Indochina, Indonesia, the Philippines, and elsewhere in their “East Asia Co-Prosperity Sphere” might opt for “worse.” Gen. Douglas MacArthur modernized Japan.

It’s perfectly understandable that Applebaum doesn’t consider Trump the solution to these “pathologies,” but he certainly didn’t cause them either. And he’s the first president to address the unspeakable scandal of mass illegal immigration, to face up to the high-handed and deceitful conduct of China in trade and related matters, to reestablish the concept of nuclear non-proliferation among irresponsible states, and, in rebuilding the enterprise economy, to create conditions in which the lowest 20 percent on the income scale are gaining income, on a percentage basis, more swiftly than the top 10 percent.

At least it’s a start at addressing the income disparity problem.

And whatever else he may be, Donald Trump is not the “Mikado.”

Conrad Black has been one of Canada’s most prominent financiers for 40 years, and was one of the leading newspaper publishers in the world. He is the author of authoritative biographies of Franklin D. Roosevelt and Richard Nixon and, most recently, “Donald J. Trump: A President Like No Other.”