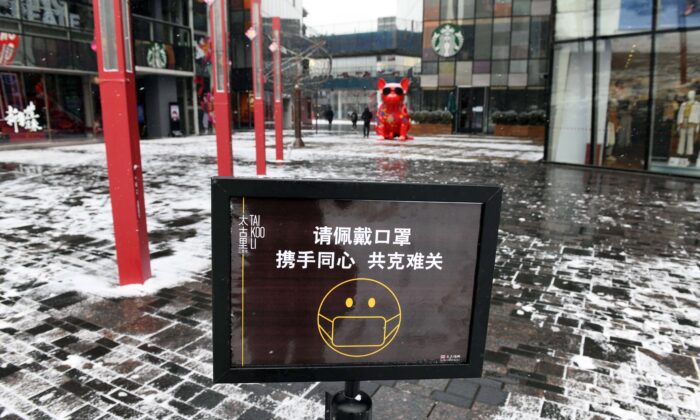 A sign urges visitors to wear face masks at the entrance to an empty shopping mall in Beijing on Feb. 5, 2020. Greg Baker/AFP via Getty Images
Viewpoints

China’s coronavirus disease 2019 (Covid-19) continues to take human lives. The Chinese people have suffered the most in terms of total cases and lives lost. The epidemic began in Wuhan, capital of the Hubei province. As I write this column, Hubei has had 60,000 confirmed cases and almost 1,800 deaths.

Covid-19, however, has escaped China’s political borders. The World Health Organization’s Feb. 18 Covid-19 “Situation Report 29” declared that 25 countries have clinically diagnosed Covid-19 cases, and many are laboratory-confirmed. As of Feb. 17, WHO had sent virus laboratory testing kits to 34 countries. Eventually, 56 countries will receive them.

Though it is no economy killer, Covid-19 does threaten the world’s economic vigor. That is not a surprise. The current trade war between the United States and China has only begun to decouple their economies.

China’s communist government must import natural resources (oil and minerals) to keep its industry humming. It also imports some foodstuffs that have domestic political impact. Since a swine virus devastated its pig farms, China relies on U.S. pork to appease the palates of its oppressed but increasingly restless citizens.

In the last three weeks, a spate of corporate and governmental announcements shows the U.S. and Chinese economies remain entwined.

For example, Apple warned investors that the coronavirus epidemic will prevent it from meeting first-quarter profit expectations. Domestic Chinese demand for Apple products has declined sharply. The epidemic has also disrupted iPhone production in China. Apple remains a blue chip company, but it faces demand and supply chain problems.

The epidemic has also disrupted the world’s largest mobile phone industry trade show, the Mobile World Congress. On Feb. 12, the MWC decided to cancel its annual Barcelona conference. Fear the disease may spread is one reason, but travel restrictions from East Asia would have reduced attendance.

On Feb. 14, The Wall Street Journal examined the epidemic’s effect on auto industry manufacturing. Once again the big factor is supply chain disruption. Hyundai and Renault have slowed production on selected assembly lines in South Korea. Fiat-Chrysler is halting car production at its factory in Kragujevac, Serbia, because the facility relies on Chinese-made parts. North America is not decoupled. The Journal quoted a United Automobile Workers source who warned that General Motors’ Arlington, Texas, assembly plant may face a shortage of Chinese-made components.

The Chinese National Immigration Agency has reported that 133 countries have imposed entry restrictions on Chinese citizens or individuals who have visited China. For health reasons, the quarantines are mandatory and must be enforced. But they exact economic costs, obvious and hidden. For example, Chinese companies operate several globally important mines in the Democratic Republic of Congo. Typically, Chinese nationals fill the critical skilled-worker positions. Movement restrictions could “extend the timelines” for manufacturing projects relying on Congolese minerals from Chinese-operated mines.

A recent Reuters report provided a superb example of economic disruption attributable to a quarantine. The state-owned China Railway International Group’s high-speed rail project in Indonesia is one of Beijing’s marquee Belt and Road Initiative megaventures. Key managers and technical workers who went to China for the Chinese New Year cannot return to Indonesia. The project now faces major delays.

The virus bugs the oil business, with Iran a definite loser. China has been Iran’s biggest buyer, importing roughly 300,000 barrels a day in 2019. Reduced economic activity lowers China’s demand for oil. According to The Wall Street Journal, U.S. government officials attribute some of China’s decline in demand to the domestic transit restrictions. People can’t travel.

Thus, Covid-19 exacerbates Iran’s economic maladies. Are the ayatollahs blaming their best customer? No, they will find a way to blame America for the disease.