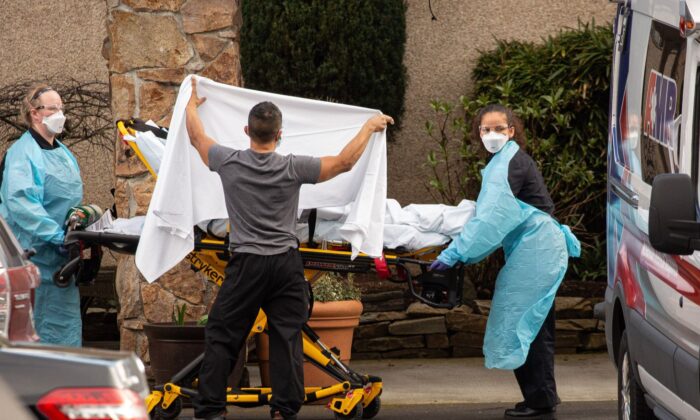 Healthcare workers transport a patient on a stretcher into an ambulance at Life Care Center of Kirkland in Kirkland, Washington, on Feb. 29, 2020. (David Ryder/Getty Images)
AMERICA

US Coronavirus Cases Jump to 72 as ‘Community Spread’ Reported

A top U.S. health official said officials are starting to see community transmission of COVID-19 coronavirus cases in United States as the number of countrywide cases has risen to 72 as of Sunday.

Dr. Anthony Fauci, a member of the White House coronavirus task force, explained on Sunday that there has been an increase in cases of the virus that cannot be traced to anyone. This is in contrast to previous cases, where patients had a connection to an infected person from a hard-hit area such as China or the Diamond Princess cruise ship held off Japan.

While it’s not a surprise to federal health officials, Fauci said it will make it more difficult to contain the spread of the COVID-19 virus.

“This was something that was entirely expected when you have diffuse infections throughout the world—as you’ve just mentioned, South Korea, Iran, Italy, in places like that—sooner or later there are going to be cases in your country that you can’t directly trace to anyone,” Fauci told Fox News on Sunday. “That becomes much more challenging about identifying the source.”

Iran, South Korea, and Italy in recent days have seen an uptick in COVID-19 cases, ranging in the thousands. In Italy, the cases are centered in the country’s northern Lombardy and Veneto regions, while in South Korea, Daegu has been the most impacted.

Community transmission cases with an unknown origin have been reported in Washington state, where the first American fatality from the coronavirus was also confirmed, and in nearby Oregon. Health officials will now have to conduct “much more intensive contact tracing in addition to the isolation,” said Fauci, who is the director of the National Institute of Allergy and Infectious Diseases.

The viral outbreak began in China and has infected tens of thousands of people around the world—namely inside mainland China. According to an Associated Press tally, there have been 72 cases and one death confirmed in the United States.

Rhode Island on Sunday confirmed its first coronavirus case, saying it was a woman in her 40s who had traveled to Italy in mid-February. Health officials in Illinois also confirmed a third case in Chicago overnight.

The remaining cases were mostly reported on the West Coast, including 12 confirmed in California and six from around the Seattle area, including the lone fatality. Wisconsin, Oregon, Texas, Arizona, and Massachusetts have also reported cases.

The majority of the U.S. cases are evacuees who held on the Diamond Princess, a cruise ship that was placed under quarantine by Japanese health officials in February before the State Department evacuated hundreds of Americans. An elderly Hong Kong man is believed to have spread the COVID-19 virus on the vessel before health officials intervened.

On Sunday, President Donald Trump announced the United States will implement more extensive screening requirements for people who are traveling from coronavirus-impacted areas.

A day before that, Washington Gov. Jay Inslee declared a state of emergency to prepare for what he called a possible pandemic situation. Washington state health officials said they would investigate a longterm health-care facility in Kirkland, near Seattle, after two people contracted the coronavirus there.

As for what Americans might expect, Fauci said that “people really need to realize” more COVID-19 cases will be confirmed in the United States.

“It’s unrealistic to think it’s not going to happen,” he told Fox. “It is how we handle it that’s important.”