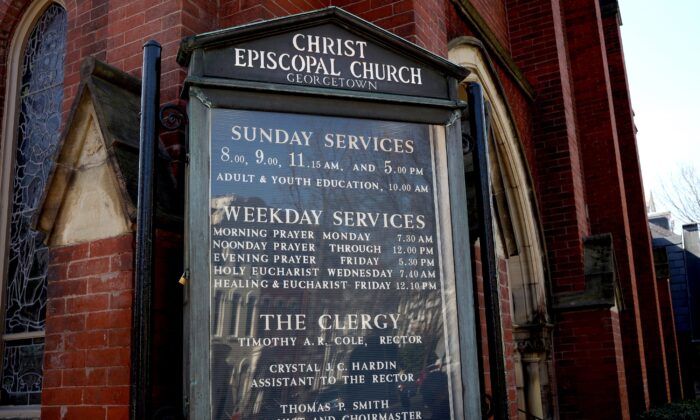 The number of new coronavirus cases in the nation’s capital and surrounding states rose to 16 late Monday with six new cases reported. After a pastor tested positive, District of Columbia officials requested hundreds of people who attended his church in recent weeks to self-quarantine.

The number of cases in Maryland is now six. Five patients each have tested positive in Virginia and Washington.

After Rev. Timothy Cole, a priest at Christ Church Georgetown, tested positive, Washington Mayor Muriel Bowser recommended that anyone who went to the church between Feb. 24 and March 3 self-quarantine for 14 days.

People who went to the church “could have been exposed to the virus,” she said.

“Isolating at home includes not going to work or school, and not attending any large or public gatherings, or using public transportation or ride-sharing.”

Anyone who visited the church during the dates listed and shows symptoms was asked to call health authorities or their doctor. Symptoms of the new virus, which causes a disease called COVID-19, are similar to the flu, and include fever, cough, and shortness of breath.

Administrators at multiple schools decided to close Monday for deep cleaning over possible exposure to the virus, including a staff member who had contact with someone who attended Christ Church. School Without Walls High School, one of the schools, was re-opening Tuesday, Washington Schools Chancellor Lewis Ferebee said in a letter to students and families.

A third-party contractor and custodians completed a “deep cleaning” of the entire building, he said. “Every surface in student and staff areas was cleaned with disinfectant following Centers for Disease Control and Prevention (CDC) guidelines. This included things such as countertops, handrails, doorknobs, handles, shelves, keyboards, elevator buttons, etc.,” he added.

Also on Monday, the Securities and Exchange Commission in Washington became the first large federal employer to urge employees to work remotely.

“Out of an abundance of caution, effective immediately the SEC is requiring all Headquarters personnel (employees and contractors) who work on the 9th floor to telework,” an email to employees sent around 8 p.m. Monday read, reported WUSA9. The reason behind the move, the email said, was because of an employee being treated for respiratory symptoms, with coronavirus a possibility.

“We are continuing to hope for the best while we’re also actively preparing for the worst,” Hogan said at a press conference on Monday.

Authorities later in the day said that a Prince George’s County resident, a woman in her 50s, contracted the virus during out-of-state travel. Prince George’s County Public Schools CEO Monica Goldson said in a letter to students and parents that effective immediately, a physician’s note for absences exceeding three days isn’t required.

None of the confirmed cases in the state involve transmission within Maryland, Hogan said.

Six additional Maryland residents were on the Egyptian cruise ship that three residents who tested positive for the virus were on, Hogan said. The six are quarantined. Two are showing symptoms. All are being tested for the virus.

Another 12 Marylanders were on the Grand Princess cruise ship, which docked in California on Monday, Hogan said. None of those people were showing symptoms but would be tested, along with all other passengers and crew members on the ship.

While Washington officials have urged people who attended Cole’s church to stay isolated, Hogan has not asked people who were at events with confirmed patients to self-quarantine, including a reception after a funeral at a senior living center, the Village at Rockville, and the Conservative Political Action Conference (CPAC), which took place in Oxon Hill just outside Washington. Several members of Congress have gone into self-quarantine over contact with a patient at CPAC.

“It’s a different situation in a number of respects,” Hogan said. “This was the priest himself who was serving Communion to all of the parishioners while he was actively sick. There was more of a concern that he was potentially infecting people. And that wasn’t the case at CPAC.”

The person who attended CPAC who tested positive, Hogan added, is a New Jersey resident who is being treated there.

Virginia on Monday said an Arlington County resident tested positive for the new disease. The person, in their 60s, developed symptoms after returning from international travel. The country the person went to wasn’t named.

“We are working closely with our health care partners and the state to monitor the patient and identify and work with their close contacts,” Arlington County Health Director Reuben Varghese said in a statement. “Confirming a case of COVID-19 in an Arlington resident does not come as a surprise given international travel from an affected area. We understand the risk of coronavirus disease (COVID-19) increases among close contacts of infected persons.”

The state Department of Health later announced that two other patients tested positive. One patient is a household contact of a previous case identified in Fairfax. That person traveled on the same cruise in Egypt, on the Nile River, as her husband.

The other patient is a person in their 50s who lives in Spotsylvania County. Officials did not say how the patient contracted the virus.

COVID-19 emerged in Wuhan, China last year and has spread to over 100 countries around the world. There’s no vaccine or proven treatment at this time, though many people have recovered through medical care and rest. The disease mostly impacts older people, especially those 80 or older, according to health experts.

Preventative actions can include frequently cleaning hands with soap and water for at least 20 seconds or with an alcohol-based hand sanitizer, avoiding sick people, and not touching one’s face with unwashed hands.

People who are sick should stay home and contact health authorities or their healthcare provider.