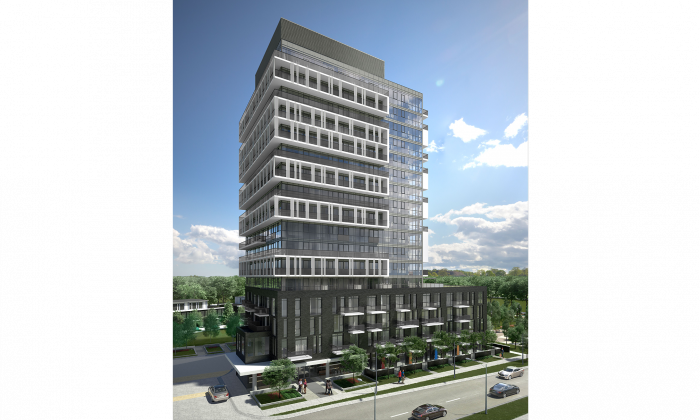 Rendering of Soul Condos, part of a condo and townhouse development by FRAM Building Group at Fairview Mall Drive in Toronto that will ultimately include five mid-rise buildings and townhouses, 1,000 units in all. (Cornerstone Marketing Realty)
Canadian Content

After years of helping other companies sell condominiums, industry vet Johnson Cheng struck out on his own in 2013, partnering with protégé Shab Rajabzadeh to launch Cornerstone Marketing Realty.

The North York-based brokerage had a tremendously successful inaugural year, doing more than $750 million in condo sales (that’s about 1,500 units, or 20 percent of the market), most of them at a pair of Menkes Developments downtown projects: Harbour Plaza Residences in Toronto’s burgeoning South Core district, and 365 Church. The latter is the first new residential development on Church Street near old Maple Leaf Gardens in years.

Cornerstone followed up in 2014 with the re-launch of Menkes’ 87 Peter Street (previously known as Noir), helping the project to reach its sales threshold and start construction. Last year also saw the brokerage launch Menkes’ The Eglinton, on Eglinton Ave. E. between Yonge St. and Mount Pleasant Rd., bringing the 34-storey tower to market ahead of several other high-profile developments in the area. Construction is slated to start soon.

And Cornerstone has wasted no time getting going early this year, working with FRAM Building Group—the residential developer of Shops at Don Mills—to launch Soul Condos, part of a master-planned project across the road from Fairview Mall that will ultimately include five mid-rise buildings and townhouses (1,000 units in all), with a one-acre park and TTC subway station on the corner.

Cheng tells Epoch Times that Cornerstone takes a direct, hands-on approach to managing all aspects of a project’s sales and marketing, allowing creativity and innovation to play a key part in the process.

“Basically there are 1,001 reasons why a project will fail,” he says, “but there’s only one reason a project will succeed: everything is in sync. It’s the right product, right timing, right place.

“Everything has to be aligned properly for the project to be successful, not just sales, but also in terms of dollars, so the client ends up happy. And that’s what we do.”

Cheng underscores the advantage his brokerage derives from its strong connections to Asian and Middle Eastern communities.

“I have a Chinese-Asian background, I know the brokers and clients, and I’m well-versed in both Mandarin and Cantonese,” he says.

“Shab’s still polishing up his Chinese,” he adds with a chuckle, “but he knows the Middle Eastern client profiles. And these are two of the largest segments investing in Toronto in the past 10 years.”

Cornerstone is attuned to the demands and preferences of both cultural communities when it comes to real estate investment, Cheng explains, “and that makes our execution and planning more holistic.”

“We’ve got our fingers on the pulse,” adds Rajabzadeh.

Cheng and Rajabzadeh first met back in 2009, and the two clicked immediately. Cheng, with more than 20 years of experience, took Rajabzadeh under his wing, helping him comprehend the complexities of the condo world and showing him how to bring a building to market and sell it.

“I fell in love with the high-rise side of real estate,” says Rajabzadeh, whose background was in finance. “The design, marketing—it was a different side of it, not just transactional. It was more about having input into the overall direction of a project.”

Rajabzadeh embraced his new role rather readily, if the 1,500 units sold in Cornerstone’s maiden year serves as any indication. “That was a big achievement for Johnson and I,” he says.

“Shab’s got the brains, and I’ve got the beauty,” Cheng quips when asked how the two complement each other, adding on a more serious note that his business partner is “detail-oriented and good at catching the stuff I miss.”

Rajabzadeh is confident 2015 will prove to be just as strong a year for the GTA condo market as the previous one, when about 20,000 high-rise units sold. “People are seeing a huge gap between the price of houses and condos (about $250,000 in 2014, according to RealNet Canada), so they’re realizing the importance of investing in condominiums.”

It means end-users who can no longer afford to purchase detached homes will be looking for larger units at the condo projects they turn to as an affordable alternative.

“More people will be asking for two-bedrooms in the future,” Rajabzadeh predicts. “That’s where the market is going.”