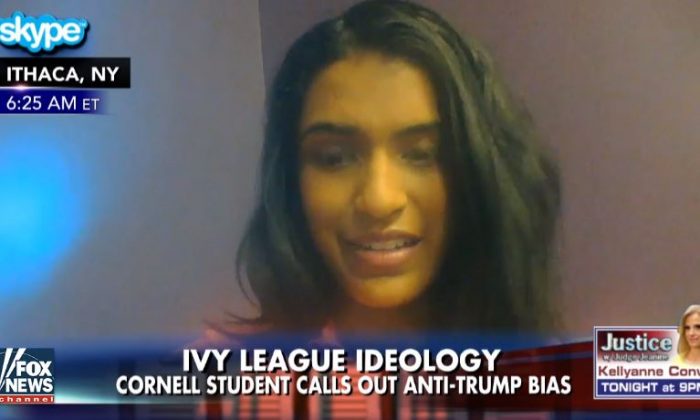 A Cornell University student says that just days after commenting on her university’s liberal bias, she was sent death threats and also suffered other verbal abuse.

Neetu Chandak appeared on “Fox and Friends” in 2016 to share her objection over a course description that seemed overly critical of then-candidate Donald Trump, while glorifying former President Barack Obama.

“Based on the syllabus it doesn’t seem like a fair conversation,” Chandek told Fox.

“If I were to walk into the classroom I don’t think I would feel comfortable expressing my views. I am somebody who likes to take a fair stance. I think it’s important that we are critical of the president but we also recognize the good that he’s done. I don’t think that would be encouraged in this class.”

Chandak said in an essay published in The College Fix that she was bullied and even received death threats after her appearance.

She said some peers called her “hateful,” while others—including strangers—said she was bigoted. One threat received over Facebook messenger came from a person who threatened violence.

“I stayed in my room for days because I wanted to avoid campus. Even though there were a lot of messages of support from home, I grappled with the fear of not being accepted or respected simply because of my views, of being mocked and taunted, and possibly even attacked,” Chandek wrote.

She even considered unenrolling and finishing her credits online, but instead sought help from a therapist. She said she’s in a better place now, but noted that fellow conservatives are often attacked on campuses across the country.

“Many people holding views similar to mine will likely not express their beliefs in the classroom or on campus out of fear of facing the isolation and threats I faced. This becomes a disadvantage for college students as the entire point is to learn about various ideas,” Chandek wrote.

“Threats to safety should be reported. But when it comes to hateful speech, a better approach is having more respectful conversations. We don’t have to agree, but a civilized conversation helps us understand the various views that exist and build the tolerance needed for the real world.”