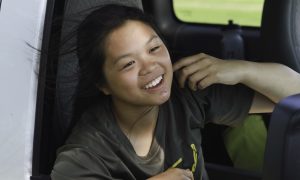 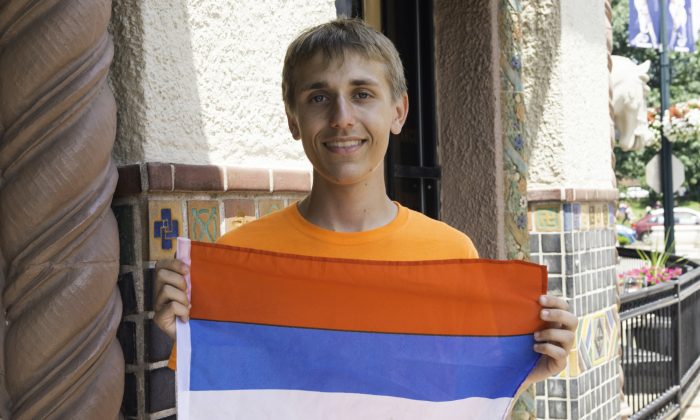 KANSAS CITY, Mo.—Two of the American teen cyclists in Ride2Freedom are honoring the lands of their parents. Nikita Kraiouchkine said, “I’m 17 years old and I represent Russia.” He is from Philadelphia, and his parents are Russian. Jasmina Davis, age 18, is riding for Peru, where her family is from. Both wear the flags of their ancestral countries on their backs as they ride.

Jasmina said, “My family were very supportive, and they were happy that I am representing Peru, and my friends were pretty amazed that I can bike 3,000 miles across the US, but they are all very happy about the cause.”

The cause is rescuing Chinese orphans who lost their parents in the Chinese Communist Party’s 16-year persecution of the nonviolent spiritual practice, Falun Gong. It has been deadly, and has broken families throughout China. The young people decided to raise awareness by cycling across the continent, and they will arrive in Washington DC on July 16, for a rally and candlelight vigil.

“Since 1999, the Chinese government has been persecuting, imprisoning, torturing and killing people who follow Falun Dafa and Truthfulness, Compassion and Tolerance,” said Nikita. “That is what we want to bring awareness to, the fact that there is no freedom of belief in China and that people following a peaceful practice are getting persecuted.”

Nikita said this summer is different for him. In the past, he has pursued hobbies and gone to the beach, but “it’s great that I have an opportunity to do something like this for such an amazing cause, than just waste my time in the summer.”

I feel like, I’m only 18, but this project has really influenced my confidence that I can speak, no matter how old I am.” Jasmina Davis, Ride2Freedom cyclist

Jasmina shared his enthusiasm. “I think the most rewarding part is seeing how people, how their responses are after we tell them about what we are doing. Because they turn out to be very supportive and they are really glad to know that children nowadays, like us, are trying to speak out and help the world.”

Both Nikita and Jasmine practice Falun Gong themselves, and so they feel a strong connection to the orphans of the persecution in China. “I practice Falun Gong and so after I realized there are so many people being persecuted, and not very happy children, I really wanted to help these orphans, so I decided to join the project,” said Jasmina.

The experience of Ride2Freedom has strengthened the cyclists.

Jasmina said she grew more determined when it was physically tough. “The hardest part is probably having your will power to go on, especially on hot days or there are steep hills, but then I have to remember that my suffering is not nearly as much as the orphans in China,” she said.

Most of all, she has learned “you can always go out and speak, it doesn’t matter what age…I’m only 18, but this project has really influenced my confidence that I can speak, no matter how old I am.”