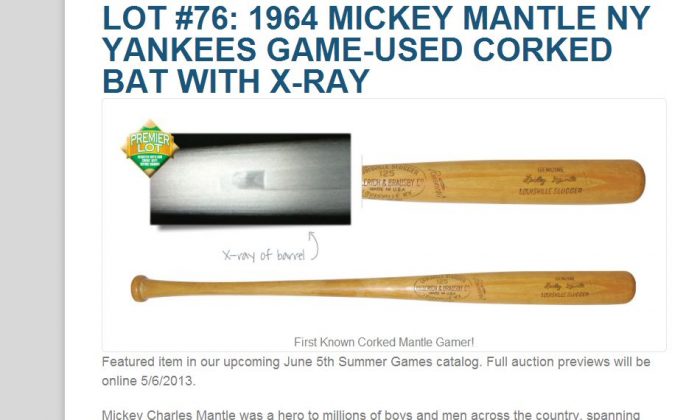 Corked Mantle Bat Being Auctioned Off

Corked Mantle bat: A corked bat that was owned by baseball Hall of Fame player Mickey Mantle was reportedly put up for auction this week.

Grey Flannel Auctions is auctioning off the former Yankees player, reported the New York Post. It was certified by PSA/DNA authenticator John Taube, who noticed that the bat was altered.

The bat was drilled and filled with cork.

“This is the first corked bat of Mantle that we have seen or heard of,” Taube said, according to the Post.

“For those and many others, this may be a hard one to swallow…but the proof, as they say, is in the pudding. Offered here is the first corked bat linked to Mickey Mantle and is accompanied by an X-ray of the bat showing the aforementioned cork at the barrel end,” Grey Flannel Auctions said.

It added: “A few ball marks are visible on the back barrel and there is a light coat of pine tar at the mid handle. Four small mounting holes (repaired) are on the back of the handle and barrel.”

Doctoring bats with cork is illegal.

Mantle is one of the all-time leading home-run hitters, generating 536 during his storied career. He also helped the Yankees win seven World Series Championships.