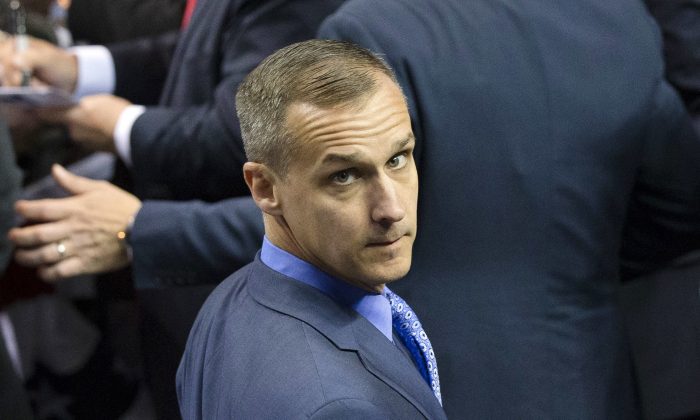 Corey Lewandowski appears at a campaign stop at the First Niagara Center in Buffalo, N.Y., in this file photo. (AP Photo/John Minchillo)
Politics

NEW YORK—Corey Lewandowski, who served a brief, stormy stint as a CNN commentator after being fired as Donald Trump’s campaign manager, has resigned from the network. His resignation Friday afternoon was effective immediately, said CNN spokeswoman Barbara Levin.

Lewandowski’s stay at CNN, which began only days after leaving the Trump campaign in June, stirred continued debate over whether political insiders hired as network on-air contributors are more loyal to the politicians they once worked for than the network that employs them and the audience it serves.

Media observers and even some CNN insiders were troubled by Lewandowski’s combative style on-air, by the fact that he was bound by a non-disclosure agreement limiting his ability to criticize Trump publicly, and all the more so when it was learned that he was continuing to receive severance payments from the campaign. The payments ended after the widespread criticism.

CNN President Jeff Zucker at the time said ideological diversity was essential to the network and that it was important to have people on air at CNN who supported the Republican nominee.

But if Lewandowski’s hiring cast a shadow on CNN’s credibility, it didn’t seem to harm its ratings. Buoyed by the presidential campaign, the network has enjoyed its biggest viewership in years.

During his CNN tenure, Lewandowski stayed in close touch with Trump, leading to speculation after this week’s stunning victory that he might take a role in the Trump administration. On Friday, he was seen arriving at Trump Tower, where the president-elect was holding transition meetings.

Considered as brash and unconventional as Trump, Lewandowski had been at Trump’s side since the campaign’s start. But he clashed with longtime political operatives who were subsequently brought in to make the campaign more professional.

Lewandowski had made headlines in March, when a video recording showed him grabbing a reporter’s arm as she tried to ask Trump a question at a Florida rally. He was charged with simple battery, although the charges were later dropped. The incident drew condemnation from Trump’s Republican and Democratic rivals alike. But Trump stood by Lewandowski, who said he was innocent.