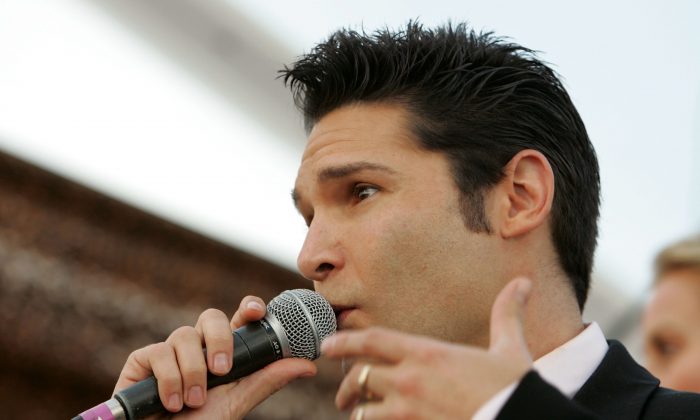 Corey Feldman Reveals Identity of Hollywood Pedophile Who Abused Him

Musician Corey Feldman has revealed the name of one of the men who he said sexually abused him when he was a working as a child actor.

The  former child star of “The Goonies” and “Stand by Me” made the revealing accusation on “The Dr. Oz Show.”

Based on the show team’s own investigation, Dr. Oz showed Feldman a photo of actor Jon Grissom, whose full name is Cloyd Jon Grissom. Upon seeing the photo, Feldman alleged that was one of his abusers.

According to the Dr. Oz show, Grissom has an extensive arrest record, including charges of for assault, theft, and drugs. He was arrested in 2001 on child molestation charges and sentenced to jail in 2003, and is is currently in violation of reporting as a sex offender, the show said.

Feldman wasn’t sure of Grissom’s whereabouts, but said he thought he was in Mexico based on his social media posts. Dr. Oz’s legal counsel said, however, said that Grissom was more likely in the United States since he had an address in Riverside, California, as recently as October.

Feldman said that he called the Santa Barbara police with names of pedophiles in Hollywood years ago, but was told that it was out of their jurisdiction.

During the show, Dr. Oz and Feldman called the Los Angeles Police Department to file a case. Only a portion of the phone call was recorded, but Dr. Oz said later that the LAPD was interested in what Feldman had to say.

Feldman mentioned Grissom in his book “Coreyography: A Memoir” using the pseudonym Ron Crimson. He said he was instructed to use a pseudonym for Grissom for legal reasons.

Feldman has mentioned in previous interviews that the reason he couldn’t name his accusers was due to statutes of limitation. And that he was worried the accused would respond with lawsuits.

But with accusations of sexual assault against film producer Harvey Weinstein, and then accusations of pedophilia against actor Kevin Spacey, Feldman said he wanted to expose the pedophilia ring he has claimed for years exists, based on his own experiences growing up in Hollywood.

“I think Corey is under the mistaken impression that this happened such a long time ago that nobody would care, that the statute of limitations have run [out],” said Oz’s legal counsel. “But even if you don’t report at 29 [years old], if you report at any time, and the police are able to independently verify the evidence that you’ve presented, they are likely to go after the person.”

Feldman is currently seeking $10 million through a crowdfunding campaign to make a movie about his experience around pedophilia in Hollywood. He promised to reveal the names of all the people he knew who were involved in pedophilia in the film. He also says he needs the money for protection, and that there has already been an attempt on his life since he announced the project.

The Indiegogo fundraising campaign page says that the names of the people in Hollywood Feldman knows to have been engaged in pedophilia are written down and in the hands of a “a trusted person of power” in case anything were to happen to him.