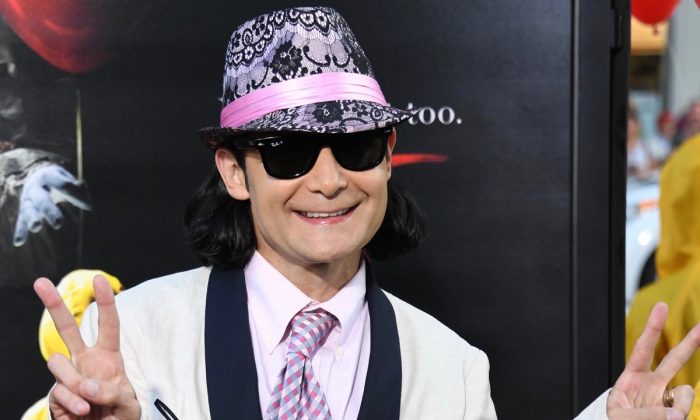 Corey Feldman revealed the name of a second man he said is molesting children in Hollywood.

During the course of an intense series of interview sessions on NBC, first with Matt Lauer, and then with Megyn Kelly, Feldman identified Marty Weiss as a child sex predator. He also told Kelly it’s not the first time he has brought up child talent manager Marty Weiss. He reminded viewers that Marty Weiss was a name he was able to print in his 2013 book, “Coreyography,” because Weiss had already been convicted of sexually abusing a child.

The name of the second pedophile emerged after Jon Grissom was first identified on the Dr. Oz show. Dr. Oz’s team dug up Grissom’s name and confirmed the find with Feldman, who conceded that Grissom is the one for which he uses the pseudonym “Ron Crimson” in his book.

During the course of that interview, Oz went on the phone with the police, with Feldman seated across from him, to try to get to the bottom of the matter on whether legal punishment is still an option. He also brought in his own legal experts to investigate Grissom and where he might be located. It was a totally different approach than that taken by the “Today” show. hosts.

Feldman was grilled by Matt Lauer from the outset, who questioned why he needed the $10 million he is seeking as part of the work he is doing to put his experience of molestation on the cinema screen. During the course of these interviews, Feldman is challenged, and reasserts why his message is important and why the method he is using is necessary.

“Why do you need $10 million dollars? Film students make movies for fractions of that,” asked Lauer.

Feldman also expressed his frustration with the way he is being pressured to reveal the names of more pedophiles. He restated how he named names in the past during a Michael Jackson investigation, but nothing was done. During her turn to interview Feldman Megyn Kelly mentioned how she contacted Santa Barbara police to get their side, but did not hear back from them.

“Let me push this forward. There are thousands of people in Hollywood who have this same information. Why is it all on me? Why is it if I don’t release the names in the next two months, six months, or a year, I’m the bad guy? I’m the victim here. I’m the one who’s been abused. I’m the one who’s trying to come forward and do something about it,” Feldman told Lauer.

“Wouldn’t you be more safe if you named the perpetrator right now and therefore immobilized him from coming after you?” asked Kelly.

“If that was the case, if the law protected me, I would do it in a second,” said Feldman.

Feldman addressed how he needs the money for the legal battle that would follow. He also explained how the other party would probably try to diminish his name so as to discredit the allegations, maybe by bringing up drug abuse. Feldman again urged those that were with him during the time when pedophiles were grooming him and other young actors to step forward and support the actions he is now taking.

When pressed by Kelly about more specifics of child predators lingering in Hollywood is when Feldman brings up Weiss.

Marty Weiss is also brought up in a 2015 film about pedophiles in Hollywood, “An Open Secret.” The film was unable to find distribution at the time, but is now experiencing an explosion in popularity, The Telegraph reported. It names several Hollywood child sex predators. The movie is free to watch online.

At the end of the film, a blurb states that Weiss is free from prison after having served just six months behind bars on multiple sex abuse charges, but is continuing to work with children in Hollywood and is also working to reduce penalties for sex offenders.