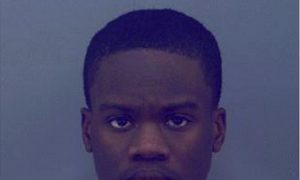 Corey Bernard Moss, who was accused of trying to murder Rachel Poole as she spoke via videoconferencing with her husband, no longer faces the murder charge.

Poole left the courthouse on Thursday in tears after learning that Moss only faces burglary with intent to commit a felony charge.

Poole was nine months pregnant at the time.

He was identified after Poole started screaming his name while he attacked her, which her husband heard, police said.

El Paso Police Department Detective Alfredo Hernandez told a judge late last year that Moss admitted to the attack, but that Moss told him that he only wanted to hurt Poole “just enough” to avoid paying the $3,000 that he owed to Poole.

Gary Weiser, an attorney for Moss, said he agrees that Moss should be convicted based on the evidence available right now, but doesn’t agree with the Capital Attempted Murder charge.

“I understand that the offense is terribly heinous, I understand the injuries to the victim in this case, but to take the position that he intended to kill both the mother and her unborn child, in my view, is extreme,” said Weiser at the time.

Justin Poole, Poole’s husband, told KFox that he is upset that the capital murder charge was dropped.