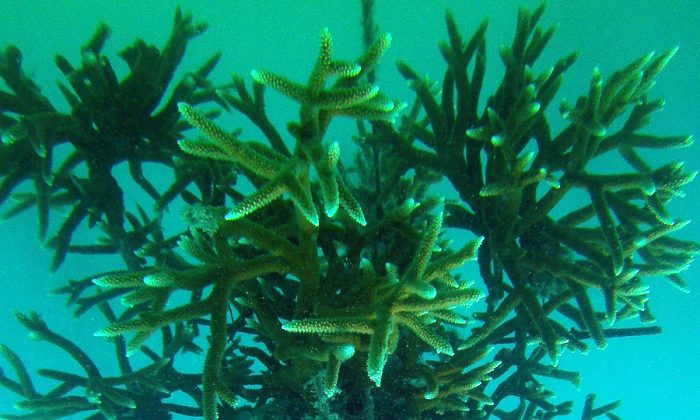 Coral reefs are under attack all over the world. While it may not seem apparent at first glance, corals are classified as animals. Life for these anthozoans, translated from Latin as ‘flowering animals,’ begins as free-swimming planula larvae. The larvae land on a substrate, attach themselves and begin to form a colonial structure. Corals can develop asexually as new polyps bud off old or divide by fission. There is usually a yearly spawning period when eggs and sperm are released. Hermaphrodites release eggs and sperm, however, most corals are either male or female.

To survive corals require clear, clean water where the temperature remains above 68 degrees F. Zooxanthelae, green dinoflagellates that produce chlorophyll by photosynthesis, live inside coral polyps and aid digestion. These microscopic plants are necessary for coral to survive. As plants they require light.

Human population growth and land development has destroyed coral. Sewage waste, storm drain water, fertilizers, pesticides, herbicides and all manner of waste including animal waste and agricultural run off eventually finds its way into the oceans. Evaporation of ammonia and other nitrogen carrying wastes return to the ocean every time it rains. Nitrogen in the marine environment is a nutrient for algae. Algae drapes itself over coral and suffocates it. Coral collection, physical damage, hurricanes and diseases have taken tolls on these important reef builders.

To counter the destruction of coral Ken Nedimyer began coral nurseries in the Florida Keys off Islamorada. A biologist that worked as a fish collector for aquariums, Nedimyer began a live rock trade. He would place piles of limestone rocks in the Atlantic Ocean and sell them to aquarists. Thirty years ago, by accident, Nedimyer observed staghorn coral growing on his submerged rocks. He decided to sell it. Over time he grew staghorn and elkhorn coral.

After an experiment with his daughter for her 4 H project, Nedimyer had the idea to make coral grow and plant it back on the reef. He formed the Coral Restoration Foundation and obtained permits from the National Marine Sanctuary to collect ‘fragments of opportunity’ for his nursery.

“These are pieces of coral that have broken off or are lying in the sand. They would not ordinarily survive. We collect them and hang them on trees in our nursery,” Pam Hughes explained. Pam is the foundation’s dive safety officer.

“We identify where the fragments came from by number. This way we identify DNA strands and can plant different DNA strands on the reefs.”

Pam described the coral nursery maintained by the not-for-profit foundation: “It is an acre in the ocean with 250 coral trees. There are about 30,000 branches of coral being grown on the trees. We have three nurseries. One on Carysfort Reef, one in Key West and this one on Snapper Ledge is the largest in the world.”

Pam is one of five paid employees of the foundation that draws on volunteers from all over the world. “We have a Board of Directors. Lots of smart people supporting us,” she said. The foundation has just received a three-year NOAA grant based upon their great success with coral spawning last year.

“With our farmed and transplanted coral there was a huge spawning last year. People realized that there is hope. There is a lot of science behind what we are doing. Coral needs sunlight so shallower coral does better. Elkhorn coral has thicker branches that protect smaller staghorn coral when there are hurricanes and storms. There are even places where the two species spawn together,” Pam explained.

Volunteers come to the Keys to help. Families dive with Pam and other staff members to farm the coral nursery. Trees with metal branches are fixed to the bottom with flexible connections. The trees are held upright in the ocean by floaters. Pieces of rescued coral are hung on the trees like so many Christmas ornaments. They grow and develop into branches.

“We harvest these branches and take them back out to different reefs and plant them,” Pam said. Once coral branches are harvested they are placed in large buckets of salt water and transported to a nearby reef.

Volunteer divers use epoxy to cement the branches to bare substrate. Volunteers use hammers to scrape away place on barren coral rocks underwater. Bits of epoxy are placed on the ends of the branches to secure transplants.

“In a few months you won’t even see where the epoxy was,” Pam explained. Dive clubs, college classes, families and divers volunteer to help with the work. The foundation offers a teaching program. Tuition goes to help fund the project. Genetic testing is performed at Pennsylvania State University.

“Our first out-planting was done ten years ago on Molasses Reef. It is the most dived reef in the world. The tanker ‘Weldwood’ ran aground there and rocked back and forth in the waves for twelve days. There was a lot of coral damage and destruction. People were skeptical. Ken was finally allowed to bring coral out and plant it there. It worked,” Pam explained.

The Coral Restoration Foundation has been issued additional permits to grow other coral species including brain and fire corals. Their nursery is a veritable coral garden. A simple idea that has blossomed because of one man’s dedication and volunteer divers helping to make it a reality.