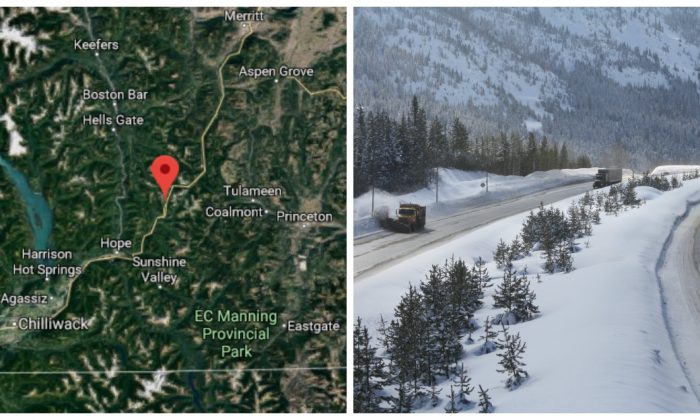 A major pileup along the Coquihalla Highway about 150 km northeast of Vancouver took place around 8 p.m. Sunday night sending 29 people to the hospital and over 130 to a warming centre. In heavy snow, a Greyhound bus, another passenger bus, two tractor-trailers, and two cars crashed, according Global News.

Eventually 36 ambulances were on scene along with two helicopters. Several area fire departments and the Chiliwack Search and Rescue workers were on scene, according to the Canadian Press. Seven patients were taken to hospital in serious condition, according to British Columbia Emergency Health Services.

The crash resulted in a closure of the Coquihalla in both directions between Hope and Merritt, but traffic was moving northbound very early Monday morning, according to DriveBC, the province’s highway notification service. The southbound direction opened shortly before 8:30 a.m. (Pacific) today.

Final update on the #Coquihalla MVI: A total of 29 patients were transported to hospital by ground and air in conditions ranging from stable to critical. A total of 136 uninjured people were taken to a warming centre in Hope. We have now cleared the scene. #bcehs

The Coquihalla Highway is part of Highway 5 in southern B.C. and is about 200 km long. It’s one of the most treacherous highways in winter with hundreds of accidents and incidents reported every year. The highway saw 32 fatal crashes between 2004 and 2013, according to data from the Insurance Corporation of British Columbia cited by Global News. The “Coq”—pronounced “coke”—follows the Coquihalla River.

“Closure is not an option,” is Davis’ motto. The series has gained international attention and will run for a sixth season starting Sept. 5.

No word on what caused the crash was reported, although earlier on Sunday,  the Ministry of Transportation had warned drivers to be cautious due to poor visibility.

A man was killed as recently on Feb. 11 in another multi-vehicle crash on the Coquihalla Highway.