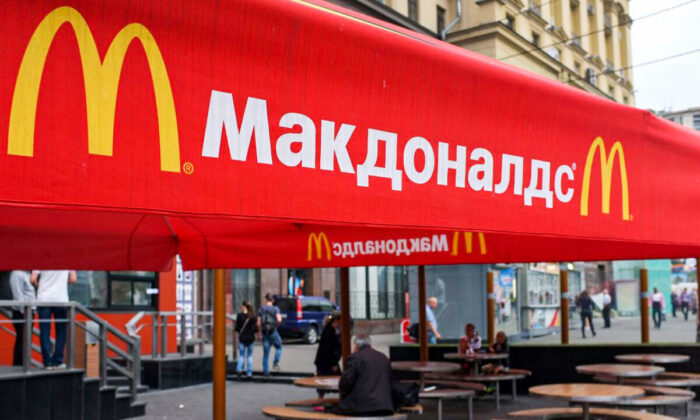 People sit on the terrace of a closed McDonald's restaurant in Moscow on Aug. 21, 2014. (Alexander Nemenov/AFP via Getty Images)
Russia-Ukraine War

Copycats of Western Brands Thrive in Russia Amid Sanctions

The mass exodus of international brands from the Russian Federation has prompted the emergence of knock-off imitators, which have attempted to fill the void of Western capital while maintaining a sense of the familiar with subtle alterations of known foreign brands.

When McDonald’s suspended activities in Russia on March 8 following a period of public backlash in the early weeks of the war, its franchises were quickly filled by an indigenous Russian competitor called “Uncle Vanya,” a brand that modifies the iconic golden arches of McDonald’s to represent the Cyrillic character “В,” which forms the “v” sound in “Vanya.”

There is a precedent for such knockoff brands in the Russian sphere of influence, which have proliferated in the Russian-aligned breakaway territories of Donetsk and Luhansk after U.S. sanctions cut off Western business to the region in 2014. Brands such as Crimean Fried Chicken and Starducks Coffee emerged to fill the void in the disputed territories, foreshadowing the rise of similar imitators in the Russian heartland.

This phenomenon, a surreal accident of the withdrawal of American commerce, is not unique to Russia during their conflicts in Ukraine. Throughout the world, American consumer exports are notable even in their absence, as local companies attempt to fill the void of ubiquitous global brands through local imitators, often with strange and jarring results.

As one of the few countries without diplomatic relations to the United States, Iran is no stranger to knockoffs of American brands, which proliferate throughout Tehran and other major urban centers. Reflecting the magnificent vowel sounds of the Persian language, such brands as Pizza Hat, Mash Donald’s, and Raees Coffee (an imitator of Starbucks) are a familiar sight to the Iranian people, with little direct exposure to American commerce.

In China, such knockoff brands are so ubiquitous that they have taken on a wide-ranging cultural significance. The word “山寨” (shanzhai), which literally describes a mountain fortress but which colloquially refers to copycat or knock-off products, has become commonplace since the economic reforms of Deng Xiaoping. So ubiquitous are such copycat brands, presented either as earnest counterfeits or self-aware parodies, that the word “shanzhai” was chosen by novelist Yu Hua as one of just ten words to understand the character of modern China in his collection of essays, China in Ten Words.

The phenomenon is perhaps most bizarre in Southeast Asia, where such knockoffs of Western brands are not infrequently paired with an unlikely historical figure of the 20th century. In Thailand, a knock-off of Kentucky Fried Chicken replaced the iconic image of Colonel Sanders with a dour-faced illustration of one Adolf Hitler, prompting an amused backlash in Western media (the restaurant, which was simply called “Hitler,” rebranded in response to criticism).

For many of the same reasons that American and multinational businesses are unable to capture the market in these corners of the world, it can be difficult for these corporations to litigate against such copycats. These legal barriers are especially challenging if the United States does not maintain diplomatic relations within a nation, such as is the case with Iran, or if relations are fraught with issues of far greater importance, as in Russia since the onset of the war.

The effect of such counterfeit brands can be jarring, uncanny, or mirthful to Western eyes, unaccustomed to seeing such familiar brands re-imagined in a completely foreign cultural context. However, the emergence of such copycats has special significance for Russia, a country where Western brands were once seen as heralding a new economic order for the nation of Tolstoy and Tchaikovsky.

In Russia, the replacement of American brands by indigenous knockoffs is just one further sign of the nation’s isolation from the global economic community. When the first McDonald’s opened in Moscow under Mikhail Gorbachev in 1990, it was seen as a sign of change, a harbinger of the unipolar domain and the so-called end of history.

But history tends to bury its undertakers, and Russia has chosen a different path, as deep-rooted cultural suspicions and the autocratic tendencies of Vladimir Putin have made an alliance with the West impossible for the preeminent Slavic nation. While the new Russia is not Soviet in ideology, and while it is dispossessed of much of its former power by the loss of the 14 smaller Soviet republics, it has nonetheless retreated from American capitalism.