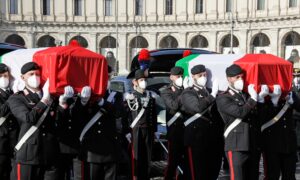 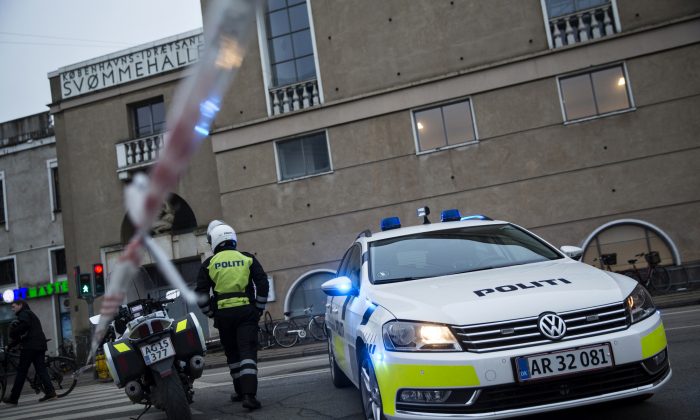 Reports on Saturday say that there has been a shooting at a Copenhagen synagogue at Krystalgade street. . (AP Photo/Polfoto, Janus Engel)
Europe

Reports on Saturday say that there has been a shooting at a Copenhagen, Denmark synagogue at Krystalgade street. One person was shot in the head and two police officers were wounded by gunfire.

According to the local reports, the shots were fired after 1 a.m local time. It is not clear if the synagogue shooting is related to the earlier cafe shooting–described by Denmark officials as a “likely” terror attack–in Copenhagen.

Denmark: U/D Photo of Police o/s of reportedly shots were fired in a synagogue in Krystalgade in Copenhagen. pic.twitter.com/7stfLg9K2g

Danish Police: shots fired at synagogue in the centre of copenhagen and Sky cameraman reports a number of police seen gathering at the scene

According to a translated DK.de news site report, “Shots have been fired at the synagogue in Crystal Street in central Copenhagen, confirms Copenhagen Police to BBC News. No reports say the it’s being evacuated.

“The spokesman for the Jewish religious communities in Denmark, Dan Rosenberg Asmussen, told BBC News that he is on his way to the synagogue,” the report adds. “He has no further information at this time.”

Here’s the AP update on the earlier shooting in Copenhagen:

A gunman opened fire Saturday on a Copenhagen cultural center, killing one man in what authorities called a terror attack against a free speech event featuring an artist who had caricatured the Prophet Muhammad.

The shooting, which also wounded three police officers, came a month after extremists killed 12 people at a satirical newspaper in Paris that had sparked Muslim outrage with its depictions of Muhammad.

There was no immediate claim of responsibility for the shooting, which took place shortly before 4 p.m. Danish police said the gunman used an automatic weapon to shoot through the windows of the Krudttoenden cultural center, which TV footage showed were riddled with bullet holes. The gunman then fled in a carjacked Volkswagen Polo that was found later a few kilometers (miles) away, police said.

They said the victim was a man about 40 who was inside the cultural center. He has not yet been identified. Two of the wounded officers belonged to the Danish security service PET, which said the circumstances surrounding the shooting “indicate that we are talking about a terror attack.”

Lars Vilks, a Swedish artist who has faced numerous death threats for caricaturing the Prophet Muhammad, was one of the main speakers at Saturday’s panel discussion, titled “Art, blasphemy and freedom of expression.” He was whisked away by his bodyguards unharmed as the shooting began.

Vilks, 68, later told The Associated Press he believed he was the intended target of the shooting.