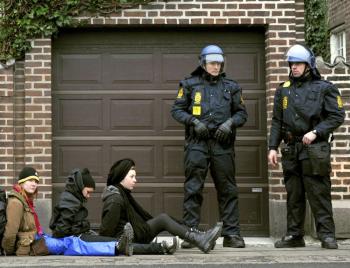 Police officers stand beside female protestors after they were restrained following an unauthorised demonstration in the northern section of Copenhagen on Dec. 13. The demonstration followed the mostly peaceful march on Dec. 1. Led by dancers and drummers, 30,000 people marched through Copenhagen, demanding world leaders declare war on the greenhouse gases that threaten future generations with hunger, poverty and homelessness. (Adrian Dennis/AFP/Getty Images)
Europe

People in the mostly peaceful march, led by dancers and drummers, carried banners like, “There is no Planet B,” or “Demand climate justice.” Celebrities like Indian actor Rahul Bose joined the protesters. Danish fashion model Helena Christensen, who herself was born in Copenhagen was also in attendance.

Riot police arrested some 1,000 people when groups of demonstrators dressed in black clothing started to smash windows in the center of Copenhagen. One policeman was injured after being hit with a stone.

However, some participants described police behavior as overreacting. Hundreds of protesters were forced to sit on the cold ground with hands shackled behind their backs. “People were there in freezing conditions urinating on themselves and being held in lines like, essentially, like animals,” activist Mel Evans from Climate Justice Action told the BBC.

The police spokesman Henrik Jacobsen described the police action as preventive, so that “problematic persons” would not disturb the peaceful demonstration. Most of the protesters were released after several hours, while 13 remains in custody. Two Danes and a Frenchman will face a court hearing on charges of fighting with police.

Protests continued on Sunday but on a much smaller scale, where the riot police outnumbered the activists. More than 200 people were arrested.

According to activists, the protest are now likely to continue during the second week of the summit. Some groups have threatened to take over the U.N. conference on Wednesday and make it a “people’s summit.”

The U.N.-backed conference, which started on Monday Dec. 7 hosts more than 15,000 delegates from 192 countries discussing new agreements on the fight against global warming and climate changes.

The weekend demonstrations happened halfway through the twelve day climate summit. In the days following, Barack Obama, Chinese premier Wen Jiabao, and more than 100 other world leaders are expected to arrive to Copenhagen to finalize the talks.

Environmental groups from Europe will announce on Tuesday the Angry Mermaid Award for the company or lobby group, that had made the greatest effort to sabotage the climate talks. The award is named for Copenhagen's iconic mermaid statue that is apparently angry about the destruction caused by climate change. Votes for the winners can be cast on the Web site www.angrymermaid.org.