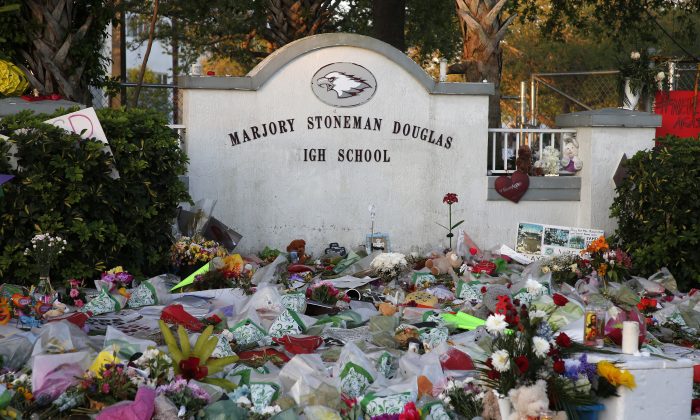 The former deputy who didn’t enter a Florida high school during the mass shooting on Feb. 14 appeared to be aware that shots were being fired from inside the building, despite stating he thought they originated outside.

Police radio dispatches, released by the Broward County Sheriff’s Department on March 8, show that former Deputy Scot Peterson radioed that gunfire was coming from “inside” during the attack at Marjory Stoneman Douglas High School, the Miami Herald reported.

“Do not approach the 12 or 1300 building, stay at least 500 feet away,” Peterson is also heard saying over the radio.

Peterson previously stated, through a statement by his lawyer, that he believed the gunshots came from outside the school buildings.

The statement said: “Upon arriving at 1200 building Mr. Peterson ‘heard shots but believed that those shots were originating from outside of any of the buildings on the school campus.’

“[Broward Sheriff’s Office] trains its officers that in the event of outdoor gunfire one is to seek cover and assess the situation in order to communicate what one observes to other law enforcement.”

According to a timeline released by the Sheriff’s Office, Peterson initially radioed to report the shooting at 2:23 p.m., two minutes after Nikolas Cruz started opening fire, the Miami Herald reports.

“Be advised we have possible—could be firecrackers. I think we have shots fired, possible shots fired—1200 building,” Peterson told dispatch.

Investigators say Peterson then arrived outside the building, where he appeared to remain for the “duration of the incident.”

At 2:25pm, four minutes into the shooting, Peterson radioed, “All right… We also heard it’s by, inside the 1200,” the Miami Herald reported.

When the shooting stopped at 2:27pm, Peterson is heard radioing for officers to “stay at least 500 feet away at this point.”

“It certainly backs up that he never went into the school,” Bell said of Peterson. “At one point he says to keep back 500 feet. Why would he say that?”

Peterson resigned after being suspended without pay and placed under investigation.