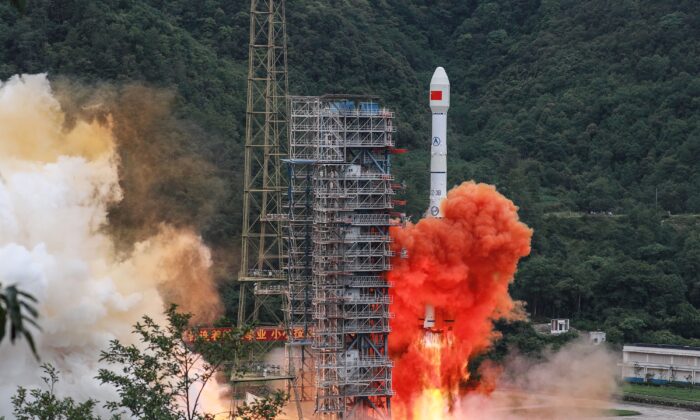 A Long March 3B rocket carrying the Beidou-3GEO3 satellite lifts off from the Xichang Satellite Launch Center, China, on June 23, 2020. (STR/AFP via Getty Images)
UK

The West is facing a growing threat from China in the space sector, and a coordinated response is needed to counter that, space industry experts told the UK Parliament on Tuesday.

“I think China is one of the biggest issues at play geopolitically. China is building up a strong military and civil and more commercial space programme now. It’s very advanced. The threats are increasing from them,” said Nik Smith, Lockheed Martin Space UK Regional Director for the UK, at a session of the Defence Select Committee in the House of Commons.

Smith warned that the UK needs to avoid another potential “Huawei-type situation.” Britain has become so dependent on telecom equipment from the Chinese company that Prime Minister Boris Johnson initially refused to ban Huawei from the UK’s 5G networks, a decision that was reversed in July 2020 under intense pressure from the Trump administration.

“If the Chinese continue to invest particularly commercially—they are building a 13,000-satellite mega constellation funded by their government—we need to be careful not to fall into that situation that we saw with Huawei,” said Smith, adding “we need a coordinated Western response on this, working closely with our allies.”

At the official opening of the UK Space Command in July, Air Chief Marshal Sir Mike Wigston, the head of the Royal Air Force, said China and Russia’s activities in space were “reckless.”

He said the UK sees the two countries’ development of anti-satellite weapons as “a real concern” and wants the international community to call out such behaviour.

Also addressing the Defence Select Committee on Tuesday, Nick Shave, chairman of UK Space, the trade association of Britain’s space industry, said the way to respond to these threats is through “burden sharing with allies.”

“You build up far more comprehensive enterprise responses to these threats, you work with allies to put in place a strong deterrent posture, which then is your mitigation against these threats,” he said.

Shave said the UK needs to maintain “a certain level of sovereignty” in the space sector in order to retain control.

Shave also suggested that the UK government should appoint “a minister for space” as a single role, as Japan has done, to improve coordination among all government departments involved in the space sector.