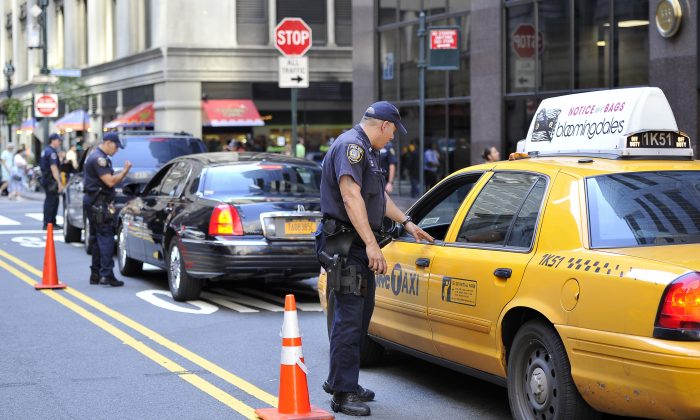 NEW YORK—Nine months after a fatal taxi crash on West 97th and West End Avenue took Dana Lerner’s son from her, Cooper’s Law is going into effect. The law, named after Lerner’s son, would allow the Taxi and Limousine Commission to immediately suspend a licensed driver who is under investigation after a serious crash.“Cooper’s Law is very, very important but I’m unfortunately worried that these laws, and Cooper’s Law, are not going to be enforced properly,” Lerner said at a press conference preceding a TLC meeting on Vision Zero rules.Vision Zero is an initiative to reduce all traffic fatalities to zero by 2024. In New York City, cars are deadlier than guns, with 286 fatalities caused by cars compared to 194 by firearms in 2013. Yet, the penalties for people who kill while driving do not even come close to the penalties in other cases. It is not uncommon for there to be no penalty at all.“A crash is killing. There is no other way of killing somebody that is treated like this,” Lerner said. “I would not wish this agony on anyone.”Last month, a new law went into effect that makes killing or seriously injuring someone while driving a misdemeanor if the driver was speeding, did not have the right of way, or did not yield. There would be a fine, jail time, or both. But it being an effective law requires the cooperation of the New York Police Department, which is still processing the new rule through its legal department to determine how it will be enforced system-wide. The NYPD did not respond to a request for comment. Lerner brought up the fact that the investigation regarding the crash that killed her son is technically ongoing, but the driver in question was never interviewed. “Drivers will be taken off the road but then there has to be an investigation,” Lerner said. “And the investigations have to be through NYPD.”TLC Commissioner Meera Joshi said that since May, there has been a historic change in interagency cooperation. The NYPD contacts TLC within minutes when there is an investigation, Joshi said at the TLC board meeting, and the TLC sends someone to the site immediately as well.

Lerner frequently takes cabs, sometimes several times in a day, and it makes her nervous that she sees so many drivers disobey traffic rules consistently.“Will I ever get into a cab without having to educate the drivers myself?” she asked at the hearing. “Out of all the drivers I have questions, and I have questioned many, and with the exception of one driver, no one has heard of Cooper’s Law.”The TLC is in the process of adding stickers that remind drivers to follow rules and be careful while turning to licensed vehicles, posted where the driver can clearly see them under the rearview mirror.Several Vision Zero laws were passed earlier this year, and there have been serious changes to the way points are added to drivers’ licenses when they break rules. Department of Motor Vehicle points and TLC points are now also totaled together, making it easier to reach the quota for a license suspension.As a result, the TLC is removing point penalties for 38 non-safety-related violations.