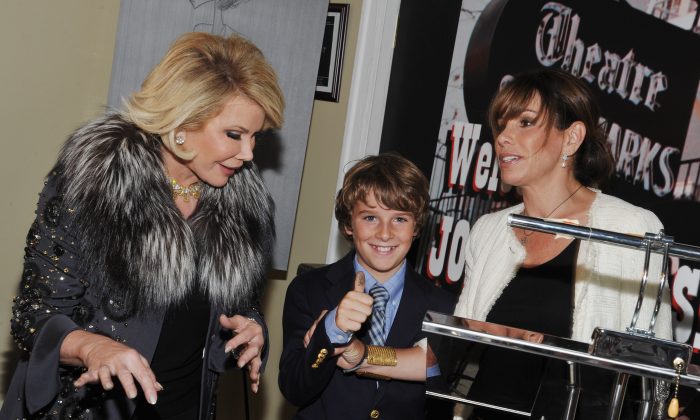 Joan Rivers died on Thursday, and fans are wondering about Cooper and his life.

Cooper is already known to some for his consistent appearances on the Joan & Melissa Show, which followed Joan and Melissa as they went about their lives. The show aired for several seasons from 2011 through 2014.

Cooper is the son of John Endicott, whom Melissa married in 1998 and divorced in 2003. Though the couple broke up, Cooper spends time with his father. Endicott was taking care of Cooper recently while Melissa stayed with Joan at the hospital.

Melissa, talking about her son to the Daily Mail in 2011, said Edgar’s suicide still has a deep effect on her. “It hits me when I look at Cooper, because Dad’s not around to enjoy his grandson. Cooper knows my dad isn’t here, and one day I’ll talk to him about it, but there’s no need for a ten-year-old to know about these things.”

She added about Cooper: “My son Cooper has just turned ten and the sarcasm fairy has already started to take up residence inside his body. Not only am I living with my mother – again! – but I’ve also got her mini-me to contend with.”

OK Magazine told her that Cooper “might be the most normal child on reality TV.”

Melissa has seen how Cooper is getting older, putting a caption on one recent picture she shared of her son on Instagram: “My friend Chris took this pic. So cool. #mybabyisgrowingup.”