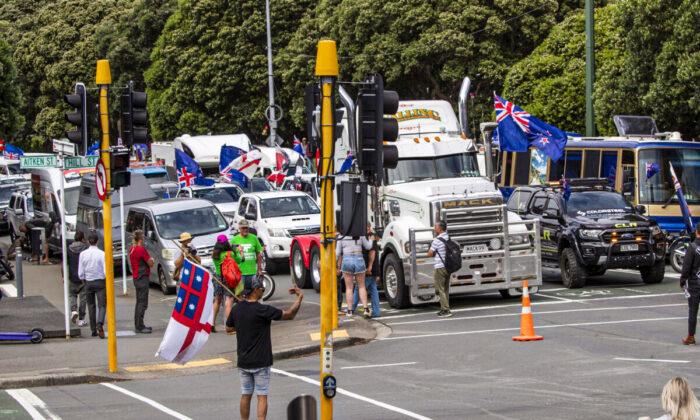 A convoy of vehicles block an intersection near New Zealand's Parliament in Wellington Tuesday, Feb. 8, 2022. Hundreds of people protesting vaccine and mask mandates drove in convoy to New Zealand's capital on Tuesday and converged outside Parliament as lawmakers reconvened after a summer break. (Mark Mitchell/New Zealand Herald via AP)
WORLD

The convoy protest against a COVID-19 vaccine mandate and other pandemic restrictions outside New Zealand’s parliament building entered its fourth day on Friday, with more vehicles joining in to block streets.

The protest has been met with a heavy-handed response from authorities.

On Thursday, police arrested 120 protesters and charged them with trespassing or obstruction. Police also used pepper spray on protesters twice after officers were pulled into the crowd.

Police said in a statement that a number of vehicles parked illegally on Lambton Quay had been moved overnight, with two protesters arrested for “alcohol-related behavior.”

“Images and videos often do not provide the full context of the protest activity and the situation police staff face. Police will not comment on individual arrests,” the police stated.

“Police reiterate their request to the protesters to leave the area, as it is closed to the public and anyone remaining on the grounds is trespassing.”

Wellington District Commander Superintendent Corrie Parnell said in a statement Friday that “a range of different causes and motivations among the protesters” are making it difficult to resolve the situation with protesters.

“Some factions are actively promoting false advice about people’s rights and police powers, which is misleading and factually incorrect. For example, the use of a particular word or phrase by an individual will not impact the arrest of anyone involved in unlawful activity,” he said.

Police also raised concerns that protesters would encourage others to bring their children to the protest site to show support.

Parnell said that those arrested and taken into police custody will be required to provide their personal details and let their photograph and fingerprints be taken by the police under the Policing Act 2008.

“Earlier today, several staff were noted to be carrying batons—that was not in line with current approach, and staff have now removed this equipment,” he noted, adding that police continue to explore options to resolve the disruption to local businesses.

The protest began Tuesday after more than 1,000 people driving cars and trucks converged on Parliament in convoy inspired by protests in Canada and elsewhere.

Among the protesters’ grievances is the requirement in New Zealand that certain workers get vaccinated against COVID-19, including teachers, doctors, nurses, police, and military personnel. Many protesters also oppose mask mandates—such as those in stores and among children over about age 8 in classrooms—and champion the idea of more freedom.