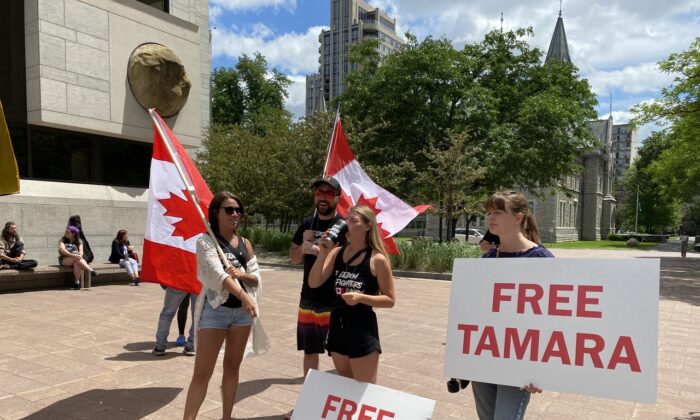 Freedom Convoy organizer Tamara Lich has been denied bail after appearing in an Ottawa court on July 8. She will remain in custody to await trial on allegations she breached bail terms set previously. Her next court date is scheduled for July 14.

Defence lawyer Lawrence Greenspon said Lich is “understandably disappointed” and that she wishes to regain her freedom as soon as possible.

The hearing was held after the Crown alleged Lich had breached her bail conditions when she attended a June 16 award ceremony in Toronto, at which she interacted with fellow convoy organizer Tom Marrazo.

Marazzo, a military veteran, volunteered as a spokesman for the truckers’ Freedom Convoy protest in Ottawa in February, which called for an end to the federal government’s COVID-19 vaccine mandates and other restrictions.

During Lich’s previous hearing on July 5, Crown prosecutor Moiz Karimjee argued that she had breached her bail conditions, presenting as evidence a photograph of Lich and Marazzo appearing together at the ceremony in Toronto where Lich was presented with the 2022 George Jonas Freedom Award. A video recording was also presented in court, which shows Lich approaching Marazzo and the two interacting.

At that hearing, Greenspon pointed out that a brief congratulatory exchange after winning an award wouldn’t lead to illegal activity and isn’t a breach of bail conditions. The court also heard testimony that lawyers who were present at the event approved the picture taken of Lich and Marazzo. Greenspon said Lich’s bail terms specified that there should be no communication with convoy organizers except in the presence of counsel.

However, on July 8, Justice of the Peace Paul Harris said he was siding with the Crown, saying that Lich chose to sit at a table with Marrazo and that it is “absolutely ridiculous” for her to believe she could justify interacting with Marazzo by having her lawyers in the room.

Harris said Lich still poses a risk to public safety, as some Freedom Convoy protests continue to be held in Ottawa from time to time.

As a key Freedom Convoy organizer, Lich was first arrested on Feb. 17 and charged with counselling to commit mischief and obstructing police, among other charges.

She was initially denied bail on Feb. 22 by Ontario Court Justice Julie Bourgeois, and after spending 19 days in custody, she was released on bail on March 7 after Ontario Superior Court Justice John M. Johnston overturned Bourgeois’ decision. Johnston said Bourgeois had weighed Lich’s offences against the impacts on Ottawa’s residents rather than other offences in the Criminal Code, which he said was too subjective in its assessment of their gravity.

Lich was released under a number of bail conditions, including having no contact with fellow convoy organizers and not setting foot in Ontario.

In April, the Justice Centre for Constitutional Freedoms selected Lich as the winner of the 2022 George Jonas Freedom Award, and invited her to accept the award in a ceremony in Toronto on June 16.

Crown prosecutors said in May that by agreeing to attend the award ceremony, Lich had violated her bail conditions and should be sent back to jail to await trial. Then on May 25, Ontario Superior Court Justice Kevin Phillips ruled that Lich didn’t breach her bail conditions, saying that “courts are not a thought police.”

But on June 27, just days after attending the award ceremony, Lich was rearrested in her hometown of Medicine Hat, Alberta, and was transferred to Ottawa for her bail hearings. She has been held in custody ever since.