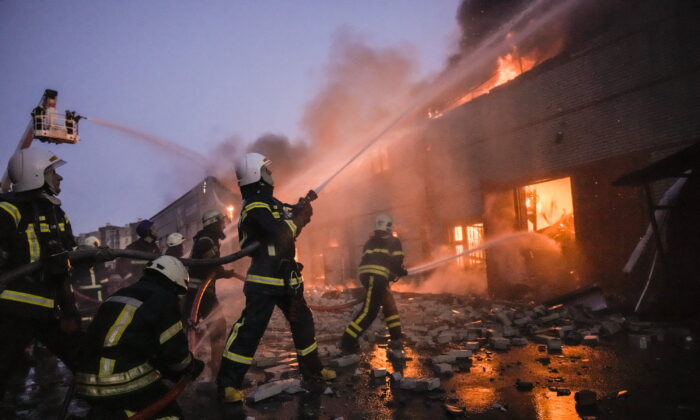 The leader of a convoy of fire engines carrying thousands of pieces of equipment which is bound for Ukraine has described the trip as “personal.”

Mike Pitney, who with other volunteers is taking 22 vehicles including fire engines and lorries packed with equipment, said he felt he had to help out the emergency services in Ukraine after Russia invaded last month.

UK charity Fire Aid and the National Fire Chiefs Council (NFCC) sent an initial delivery to the country on March 11.

The second convoy, consisting of donations from fire services across the UK, left Ashford in Kent on Saturday morning.

Pitney told BBC Breakfast: “For me, it’s quite personal, I’ve been going out there now for 10 years to Ukraine, so I have friends and family, as far as I’m concerned, out there.

“Normally you go for six or eight (in a) convoy but the need out there outweighs the work that needs to be done to make this happen.”

He described the equipment as “past-life equipment” and that something “needed to be done with it.”

Claire Hoyland, project manager for the charity Fire Aid, said: “We gather decommissioned equipment from the UK fire and rescue services. So the equipment has reached the end of its life in the UK but it’s still perfectly usable.

“So we take it overseas, alongside training, so people around the world who haven’t got the equipment we’ve got (can use it). It’s functional.”

She said the charity’s members immediately mobilised in the aftermath of Russia’s invasion of Ukraine.

Mark Hardingham, chairman of the NFCC, said they had reached Dover and got on a ferry to Europe.

He told the BBC: “For the next three days, the volunteers and the firefighters from fire services across the UK, and for Fire Aid, will be driving into Poland.

“Then when they get to Poland, all of the equipment, all of the fire engines will be made available to go across the border into Ukraine to support our colleagues in their firefighting.

“The footage I’ve been watching on television has been horrific. I’ve seen firefighters dealing with the most terrible set of circumstances in Ukraine, often with equipment that is outdated or damaged by the conflict.

“So the stuff that we sent across from every fire service in the UK is going to be vital for them to support their local communities and to keep those firefighters in Ukraine safe as well.”

Home Secretary Priti Patel said: “We are helping to ensure that crucial fire and rescue equipment and PPE donated by fire and rescue services will get to where it can directly provide succour to those brave firefighters, emergency services, and volunteers on the front line in Ukraine.”

Fire Aid members have been working in partnership with the Ukrainian emergency services since 2012.