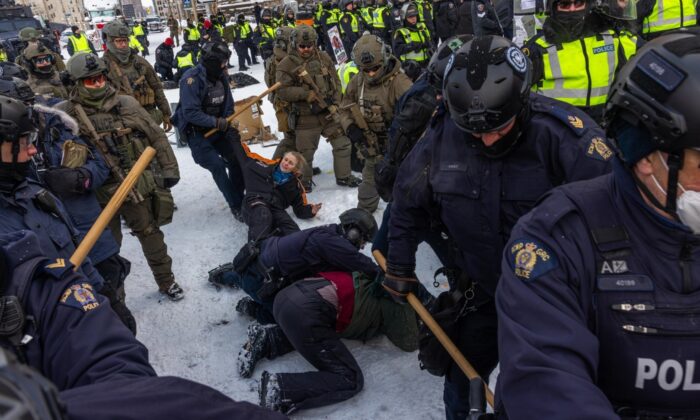 Four days before the federal government announced it had invoked the Emergencies Act to clear the Freedom Convoy protests in February, Prime Minister Justin Trudeau and his cabinet were informed that the Ontario Provincial Police (OPP) lead negotiator said the protest’s leaders could potentially be persuaded to leave in exchange for a commitment from the government to “register their message,” an internal government document shows.

Throughout the protest, Trudeau and his government refused to meet with or send representatives to dialogue with the protesters.

“The [OPP] negotiator suggested that the leaders of the protest could potentially be encouraged to leave and denounce the blockade in exchange for a commitment to register their message with the Government,” reads a document capturing the minutes of a Feb. 10 meeting in response to the protests, with Trudeau, his cabinet, and high-level public servants present.

The lead OPP negotiator’s comments were reported by Public Safety Canada at the meeting.

The internal government document, heavily redacted and labelled “secret,” was recently released along with other documents as part of a court case launched by civil liberties groups to challenge the Liberals’ use of the Emergencies Act.

The minutes indicate that the OPP negotiator also said approximately 80 percent of the protesters had “a weak connection to the cause,” 5 percent had “a strong devotion to it,” and “15 percent were a swing factor.”

On Feb. 14, the government announced it was invoking the Emergencies Act, for the first time since its creation in 1988, to respond to the protests in Ottawa and at some border crossings. By the time the act began to be used, the majority of border crossings had been cleared. The government argued that the act was needed to serve as a deterrent to new blockades.

After the act was invoked, riot police moved to disperse the protesters in Ottawa on Feb. 18, wielding batons and using pepper spray, while pushing the protesters back and making arrests. In one incident, mounted police advanced toward a crowd of demonstrators and knocked down at least two people, one of whom needed hospital care. Under new powers granted to the government, the bank accounts of a number of protesters were frozen.

The protests were cleared from the nation’s capital by Feb. 21. The government revoked the act on Feb. 23.

The convoy protesters converged in Ottawa on Jan. 29, starting a weeks-long encampment in Ottawa in opposition to COVID-19 mandates and restrictions. Begun by truck drivers opposed to the federal mandate enacted in January requiring them to have COVID-19 vaccination for cross-border travel, the protest quickly expanded as more people opposed to various mandates and restrictions joined the cause.

In his first public address after the protests, on Jan. 31, Trudeau disparaged the participants, saying he wouldn’t be “intimidated by the protesters” nor would he meet with them, a position he and his government maintained throughout the protest.

Trudeau said that he has attended rallies of other protest movements such as Black Lives Matter, but that he has “chosen to not go anywhere near protests that have expressed hateful rhetoric, violence towards fellow citizens, and a disrespect, not just of science, but of the front-line health workers.”

The charge of hatred and violence was denied by the Freedom Convoy organizers, who said their movement was peaceful and diverse. They also continued to say that their request for dialogue has been denied by the government.

“Never in my life would I believe anyone if they told me that our prime minister would refuse dialogue and choose violence against peaceful protesters,” Freedom Convoy spokesperson Tom Marazzo said at a press conference in Ottawa on Feb. 19.

Trudeau’s denouncement of those objecting to COVID-19 mandates was criticized by some dissenters in the Liberal caucus, including Liberal MP Joël Lightbound, who on Feb. 8 said the government’s approach to policy-making had changed from “a positive and unifying approach” to one intended “to wedge, to divide, and to stigmatize.”

A day later, Liberal MP Yves Robillard said in an interview with The Hill Times that Lightbound “said exactly what a lot of us think.”

At a press conference on Feb. 11, a day after the internal government meeting where the OPP lead negotiator’s comments were mentioned, Trudeau was asked by reporter Rachel Emmanuel if he had “any regrets about the approach that you’ve taken with the protesters anytime, especially your comments when they first arrived,” and whether that could have made them feel “misunderstood” and caused them to stay.

“I think there was a lot of Canadians scratching their heads at the fact that protesters who purported to speak for truckers actually didn’t represent the 90 percent of truckers who are vaccinated. I think where they certainly struck a chord with a lot of Canadians is that people are tired of COVID. They’re tired of the restrictions,” Trudeau said in response. “But at the same time, as a government, we made a promise to Canadians to have their backs every step of the way for as long as it takes.”

According to Tamara Lich, one of the organizers of the convoy demonstration, the protest was about upholding freedoms.

“Some of us have been mistreated by our government, including many of our indigenous communities who have personally experienced medical malpractice. Some of us simply want bodily autonomy and oppose the mandates on principled grounds,” Lich said at a press conference in Ottawa on Feb. 14, three days before she was arrested for her role in the protest on Feb. 17.

The Epoch Times contacted the Prime Minister’s Office and Public Safety Canada for comment but didn’t hear back by publication time.

The released documents also show that the prime minister’s national security and intelligence adviser, Jody Thomas, told cabinet members just before the Emergencies Act was invoked that “there was potential for a breakthrough” in negotiations with the protesters.

Public Safety Minister Marco Mendicino’s office reportedly told various media that those negotiations were “led principally by the city of Ottawa” and were “ultimately unsuccessful.”

Minutes from another cabinet meeting, on Feb. 12, show that Trudeau said a “number of international partners” had expressed concern about Canada’s ability to “handle” the protests.