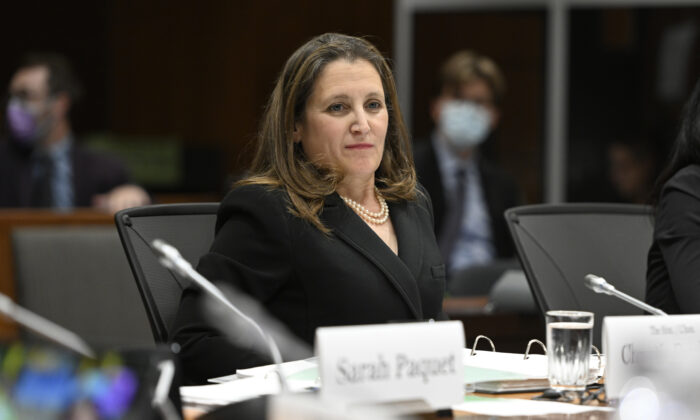 Deputy Prime Minister and Minister of Finance Chrystia Freeland takes part in the Special Joint Committee on the Declaration of Emergency surrounding the government's use of the Emergencies Act in February, in Ottawa on June 14, 2022. (The Canadian Press/Justin Tang)
Canada

Convoy Emergencies Act: What We Know/Don’t Know From Hearings So Far

Will the public get a clear picture of whether the threshold was met for the government to invoke the Emergencies Act to clear the Freedom Convoy protests in Ottawa back in February? Will the public find out the critical information that might have led to the decision to use the act for the first time since its creation in 1988?

Those and many other questions are what some are seeking answers to from two separate bodies mandated by law to probe the act’s invocation. One is the currently sitting Special Joint Committee on the Declaration of Emergency (DEDC). The other is the Public Order Emergency Commission that will be conducting an inquiry into the use of the act.

During the hearings held by the DEDC, which is formed by a joint committee of MPs and senators, some members have expressed frustration at the lack of answers provided so far by testifying Liberal ministers, who often cite cabinet confidentiality.

The Conservatives, meanwhile, have criticized the Liberal government for attempting to focus the scope of the inquiry into the protesters’ actions rather than whether the threshold to use the act was met.

Several civil liberty and constitutional rights groups, as well as the Alberta government, have launched lawsuits to challenge the federal government’s use of the act.

Four months since the emergency order, here is what has been brought forth so far.

What the Liberals Say

So far, four senior Liberal ministers have testified before the DEDC special parliamentary joint committee of MPs and senators.

In his April 26 testimony, Justice Minister David Lametti told the committee that the measures used within the act, which included freezing some of the protesters’ bank accounts, were compliant with the Canadian Charter of Rights and Freedoms, but he refused to provide his supporting analysis.

Lametti also cited cabinet confidentiality and solicitor-client privilege a number of times when refusing to answer questions from committee members.

Deputy Prime Minister and Finance Minister Chrystia Freeland and Emergency Preparedness Minister Bill Blair both highlighted in their prepared written testimonies on June 14 the issue of economic harm caused by the border blockades.

“The world’s confidence in Canada as an investment destination was being undermined,” said Freeland, calling the invocation of the act a “last resort.”

Public Safety Minister Marco Mendicino also talked about economic harm, saying in his testimony on April 26 that the delivery of essential items had been “compromised.”

He went further than his colleagues by saying that the protesters in Ottawa wanted to violently overthrow the government along with their demands for the end of vaccine mandates.

“These ideologically extreme goals helped incite thousands to form massive blockades at our borders, legislatures, monuments, and here in Ottawa in front of Parliament Hill,” he said.

Aside from those ministers’ remarks on the threats they say they saw, the government has said the use of the act was needed because law enforcement did not have the tools it needed to put an end to the blockades due to uncooperative towing companies.

Blair mentioned the issue on numerous occasions during his testimony.

“We had heard from many jurisdictions that they were virtually unable to get the tow trucks they needed to remove those large heavy trucks that were being used in the blockade. Those vehicles anchored that blockade and made it almost impossible for the police to affect a peaceful resolution of those demonstrations because of the presence of the vehicles,” he said.

Mendicino told reporters on June 8 that the power to compel towing companies “found itself in the Emergencies Act and it could not be granted to the police without its invocation.”

What the Opposition Parties Say

During the committee hearings, Conservative Senator Claude Carignan challenged claims that the powers needed by police to clear protesters weren’t available without the use of the Emergencies Act.

He asked RCMP Commissioner Brenda Lucki on May 10 if anyone had been charged under Section 129 of the Criminal Code, which states that it is an indictable offence to resist or willfully obstruct a peace officer in the execution of his or her duty.

Lucki said she was unaware of anyone being charged under that section.

Carignan also asked Blair on June 14 why the provision of the Criminal Code wasn’t used. Blair did not answer directly, mentioning that the unavailability of tow trucks was an issue across jurisdictions.

Carignan also challenged the issue of economic damage as a reason to invoke the act, since the Ambassador Bridge blockade, which accounts for hundreds of millions of dollars of trade daily, was already cleared at the time the act was invoked.

Freeland said the act was still needed as there was a “constant danger of new blockades.”

Besides challenging the reasons for invoking the act, the Opposition members of the committee have repeatedly said officials displayed a lack transparency on its use.

The Conservatives and Bloc Québécois were opposed to the use of the act, while the NDP supported it. But even the NDP MP on the special committee has been voicing criticism about the lack of details from the Liberal government about the use of the act.

Blair was the rare one not to be criticized for his responses on June 14, with Tory MP Larry Brock even thanking him for his candour, although Brock and NDP MP Matthew Green expressed disbelief that Blair doesn’t take notes when attending meetings.

“Are you telling this committee you did not keep any notes, no note-taking by you, regardless of the number of meetings?” asked Brock.

“That’s in fact true. I do not keep notes,” Blair replied.

Freeland did not say she does not take notes but instead avoided questions about any notes she took, or told the committee she would not share them, including in any meetings she had with financial institutions that froze protesters’ accounts.

Mendicino said a number of times in committees and in the House of Commons that the act was invoked based on the advice of law enforcement.

In his prepared remarks before the DEDC, he made the same claim.

“The government remained engaged with law enforcement throughout to ensure that they had the support and the resources they needed. However, when efforts using existing authorities proved ineffective, the advice we received was to invoke the Emergencies Act,” he said.

After the RCMP commissioner and current and former Ottawa police chiefs testified that they had not requested the act or advised its use, there was a change in messaging from the government.

Mendicino’s deputy, Rob Stewart, said the minister had been misunderstood and that police had only requested the tools the act could provide, not the act itself.

Freeland and Blair told the DEDC they were unaware of law enforcement providing advice to invoke the act.

The Conservatives are calling for Mendicino to resign for “misleading the Parliament.”

Along with the special committee, a commission of inquiry will also examine what transpired surrounding the public order emergency.

The way the government framed its decree setting up the inquiry indicates that it wishes efforts be concentrated on examining the protesters and their impact.

The government is also asking the inquiry to examine the appropriateness and effectiveness of measures taken under the emergency, which would include freezing bank accounts without a court order.

The commission, headed by Justice Paul Rouleau, is not asked to evaluate whether or not the threshold was meant to invoke the Emergencies Act.

In a June 1 news release, the commission called for “cooperation and flexibility from all Parties in order to meet the challenge of the tight timeline it faces.” The deadline for completing its final report is February 2023.

It also indicated that it had already asked the government for the information that “led to Cabinet’s decision to declare an emergency.”

Groups or individuals seeking standing with the commission had until June 15 to submit their applications.

The Liberal government, MPs, and the media have made a number of claims about this winter’s protest movement that have been contradicted or disproven.

NDP MP Green called the convoy an “armed insurrection” in a Feb. 10 tweet.

“They grow more emboldened by the day. Their ongoing impunity will only lead them towards deeper delusion and escalated violence,” he said in another tweet also mentioning an “insurrection.”

However, no insurrection or notable violence transpired.

Green asked Blair why he was not prepared for the truckers given he’s responsible for emergency preparedness under “anti-terrorism protocols.”

While not calling it a “terrorist event,” Blair has also made a similar claim in saying the protest movement was “a largely foreign-funded, targeted and coordinated attack on critical infrastructure and our democratic institutions.”

The crowdfunding platform GoFundMe, however, told the House public safety committee that 88 percent of donations to the Freedom Convoy fundraiser originated within Canada.

That fundraiser was shut down and another one sprung up on the platform GiveSendGo, of which 60 percent of donations were from Canada, but none of those funds ever made it to the protesters due to a court order.

On the issue of violence, internal government emails obtained by Rebel News through an Access to Information Act request also suggest the government knew the event was peaceful.

“No violence took place in the NCR [National Capital Region] despite national protest for a wide variety of causes,” wrote Deryck Trehearne, the director general of the Government Operations Centre, on Feb. 1.

This was after the first weekend of the Freedom Convoy protest, which drew the largest crowds.

Trehearne’s overall assessment derived from open sources said “the majority of the event was peaceful. Since most government employees are working remotely, the disruption to government activities is so far minor.”

There were no similar emails provided for other dates.

Another disproven claim was that the protesters were involved in an alleged act of arson in an Ottawa building, as claimed by Liberal ministers and Liberal and NDP MPs. Police said the suspects had no links to the protest. Nevertheless, Mendicino repeated the claim after the facts were made public.

After the arrest in February of a small group of individuals in Coutts, Alta., on serious charges, including conspiracy to commit murder and possession of a weapon for a dangerous purpose, some media reports and politicians have made claims linking the Ottawa protest to the same group.

One media outlet and a minister said loaded firearms were present during the Ottawa protests as well. However, Ottawa’s chief of police said no firearms were found and no related charges had been laid in Ottawa.