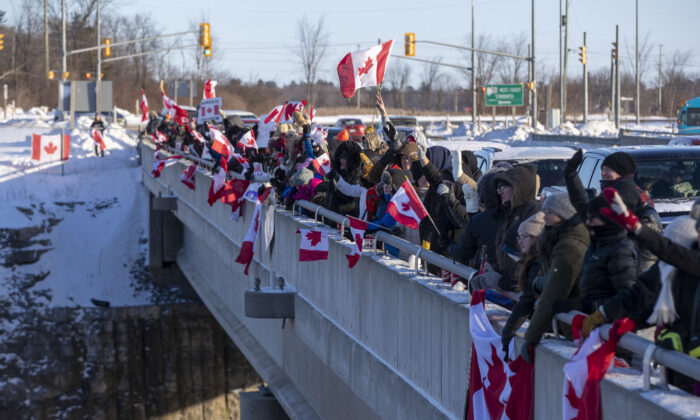 Supporters cheer on truck drivers in the "Freedom Convoy" headed for Ottawa from an overpass in Kingston, Ont., on Jan. 28, 2022. (The Canadian Press/Lars Hagberg)
Canada

With thousands of truckers en route to Ottawa for a mass demonstration against mandatory vaccination and other pandemic restrictions, officials from the City of Ottawa and the Ottawa Police Service (OPS) provided an update Friday on preparations for the demonstration.

OPS Chief Peter Sloly said the main demonstrations will take place in Ottawa over the weekend of Jan. 29-30, but organizers plan to continue protesting into next week.

“The demonstrations this weekend will be unique, fluid, risky, and significant. These demonstrations are national in scope, they’re massive in scale. Unfortunately, they’re polarizing in nature and they come almost two full years into a highly stressful and tragic global pandemic,” Sloly said at a press conference on Jan. 28.

“The organizers have advised us that this will be a peaceful demonstration,” Soly added, noting that, as protesters have already begun to arrive in Ottawa, some small demonstrations have taken place in the city core that “have been peaceful and uneventful.”

The huge convoy, which includes truckers from across the country as well as some from the United States, was sparked by the federal government’s COVID-19 vaccine mandate for cross-border truck drivers. It has since gained traction with Canadians who are upset with pandemic restrictions and mandates, and many have joined the convoy in support.

Over 10,000 truck drivers are expected to gather to the capital, rallying under the group Canada Unity. The group reiterated on Jan. 28 that the Freedom Convoy is a “peaceful and lawful action,” while warning about “imbedded agitators that we are fully aware will be present.”

The OPS said they have been in constant communication with core convoy organizers, including eight convoy captains.

However, Sloly warned that there are “parallel demonstrators” who the police have not been able to engage fully with, as well as “social media actors” who may not attend in person but “who are nonetheless inciting hate, violence, and in some cases criminality to take place in our city.”

In response to potential threats from these “lone wolf individuals,” he said, police are “prepared to investigate, arrest if necessary, charge, and prosecute anyone who acts violently or breaks the law in the demonstrations or in association with demonstrations.”

“We have the capability and the commitment to pursue investigations and prosecutions well after the demonstrations have ended,” he said.

On Jan. 27, the official in charge of security for the House of Commons, Sergeant-at-Arms Patrick McDonell, warned about the possibility of doxxing—publishing individuals’ personal information online so they can be targeted—of some MPs who live in the Ottawa area.

“If the situation becomes volatile and your security is at risk, call 911 and consider evacuating your location,” he wrote on social media.

On Thursday, Conservative MP Pierre Poilievre pushed back against reporting that frames the convoy as extremist in nature, after a reporter asked him about how he sees “the extreme elements” trying to attach themselves to the protest.

Poilievre said the question itself spoke to a larger problem with how the “liberal media” portray protests organized by conservative groups.

“What I think is interesting is that when there’s a left-wing protest on Parliament Hill, we don’t see the liberal media going through every single name of the people who attend, to try and find one person that they can disparage the whole group with,” he said.

He added that it’s normal with such a large group of people that some could say “unacceptable things,” but those individuals should be held responsible rather than the whole group.

“That doesn’t mean we disparage the thousands of hard-working, law-abiding, and peaceful truckers, who quite frankly, have kept all of you alive for the last two years by filling your grocery shelves with the food that you eat, and filling your homes with the products that you rely upon.”

Noé Chartier and The Canadian Press contributed to this article