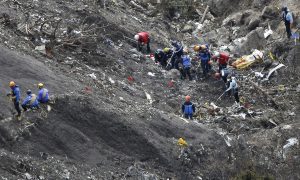 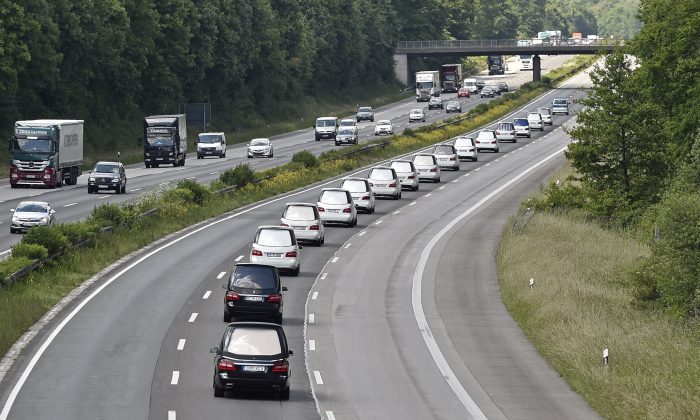 A convoy of hearses drives on the highway in Duisburg, Germany, Wednesday, June 10, 2015, taking home 16 school children who died in the Germanwings plane crash in March. The coffins, that arrived at the airport in Duesseldorf Tuesday evening, are brought to their families in the city of Haltern. (AP/Martin Meissner)
Europe

DUESSELDORF, Germany—Traveling in a solemn hearse convoy, the families of 15 of the 16 German high school students killed in the Germanwings plane crash left Duesseldorf airport with their children’s coffins Wednesday, heading to their hometown of Haltern.

Lufthansa airline on Tuesday night had flown in the remains of the first 44 of the 150 people killed when a Germanwings plane smashed into the French Alps on March 24. Authorities say the co-pilot purposely slammed the plane into a mountain.

Parents and relatives viewed the coffins inside an airport hangar before the convoy of black or white hearses, accompanied by a police motorcade, set off slowly for Haltern, 75 kilometers (46 miles) to the northeast. A bus, presumably with more relatives, and several cars followed the hearses.

The whole convoy was to pass by the Joseph-Koenig-Gymnasium, the high school the teens attended.

“This entire event is a tragedy, especially for the parents, but we, too, lost our students and colleagues,” said principal Ulrich Wessel.

Two of the teachers who had accompanied the students on a school exchange trip to Spain were also killed in the crash.

“It’s especially difficult for the students of grade 10,” Wessel said. “There used to be 150 students, now they are only 134 … Many lost their best friends.”

The group was flying back from Barcelona to Duesseldorf when co-pilot Andreas Lubitz crashed the plane against a mountain in France.

While they waited for arrival of the convoy, students in Haltern laid white roses for their dead friends on the sidewalk next to their school. They also lit white candles on the school yard, where 18 trees were recently planted as a memorial to the deceased.

Wessel said psychologists had talked to the students earlier this week and that all students would be allowed to attend their schoolmates’ funerals. The first burials will be held Friday, the last ones at the end of the month. One teen will not be buried in Haltern.

A spokeswoman for Germanwings said the remains of the other victims to their home countries had also begun and would likely be finished by the end of June.

Lufthansa spokesman Andreas Bartels said, in addition to individual returns, a special flight next Monday would return remains of the Spanish victims to Barcelona from Marseille.

In addition to the 72 German victims, 47 Spaniards, another four people who were dual citizens with a Spanish passport, and citizens of over a dozen other countries were killed in the crash.