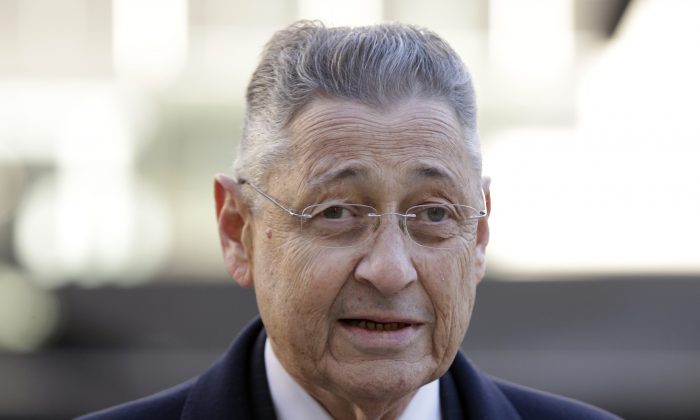 ALBANY, N.Y.—The conviction of former Assembly Speaker Sheldon Silver has shaken New York politics down to the granite foundations of the state Capitol, provoking fresh calls to overhaul a system that has stubbornly clung to its long history of corruption.

A jury convicted the 71-year-old Manhattan Democrat on Monday on charges that he traded favors for $4 million in kickbacks from a cancer researcher and real estate developers.

The rapid downfall was as shocking to lawmakers as it was troubling to longtime observers of New York politics.

“A political earthquake has hit Albany,” said Blair Horner, legislative director for the New York Public Interest Group. “This is a stinging rebuke to the ‘Albany business as usual’ defense and a clarion call to clean up state ethics.”

Silver, first elected in 1976, plans to appeal. He was ousted as speaker following his January arrest and lost his legislative seat upon conviction. He remains free on bail but faces decades in prison when he is sentenced.

For two decades, Silver loomed large as one of Albany’s “three men in a room,” who along with the Senate leader and the governor negotiated budgets, cut deals and defined New York’s brash brand of backroom politics.

“Words simply aren’t enough,” Heastie said following the verdict. “We will continue to work to root out corruption and demand more of elected officials when it comes to ethical conduct.”

Cuomo said the verdict showed “it is time for the Legislature to take seriously the need for reform. There will be zero tolerance for the violation of the public trust in New York.”

The list of possible reforms already was a long one before Silver was arrested: term limits, restrictions on lawmakers’ outside income, new campaign finance rules and tougher ethics enforcement all have been suggested, only to languish on the legislative agenda.

Meanwhile, 30 lawmakers have left office since 2000 because of criminal charges or allegations of ethical misconduct. The Senate’s former No. 2 member, Republican Thomas Libous, was sentenced to house arrest last week for lying to the FBI. Ex-Senate Leader Dean Skelos, R-Long Island, currently is on trial for charges that he extorted bribes and jobs for his son.

In just the past five years, one Albany lawmaker was convicted of taking bribes from a carnival promoter. A second entered into a sham marriage in order to become a citizen. A third was accused of harassing female staffers and forcing one to touch cancerous tumors on his neck and armpit.

“The bell could not be ringing louder for real reform in Albany than it is right now,” said Assemblyman Todd Kaminsky, a former corruption prosecutor now in his first term.

After Silver’s arrest, the Legislature passed modest changes, including a requirement that lawmakers disclose more about their private income. Calls for greater changes, and a special session devoted to ethics, went nowhere.

“What New Yorkers need most is wholesale reform of the political system,” said Lawrence Norden, of the Brennan Center for Justice at New York University’s School of Law. “Enough is enough — it shouldn’t take even more convictions for Albany to take reform seriously.”

The prosecution was a marquee case in Manhattan U.S. Attorney Preet Bharara’s quest to clean up what he has called Albany’s “cauldron of corruption.”

“Sheldon Silver got justice, and at long last, so did the people of New York,” Bharara said.

Prosecutors said Silver traded his office for $4 million in kickbacks from a cancer researcher and real estate developers and earned an additional $1 million through investments.

Silver did not testify during his trial and called no witnesses. Dr. Robert Taub told jurors he steered numerous patients with asbestos-related cancer to Silver’s law firm, enabling the legislator to pocket $3 million in referral fees. Meanwhile, testimony and evidence revealed, Silver caused $500,000 in taxpayer funds to go to Taub’s research projects and helped his son and daughter get a job and an internship.