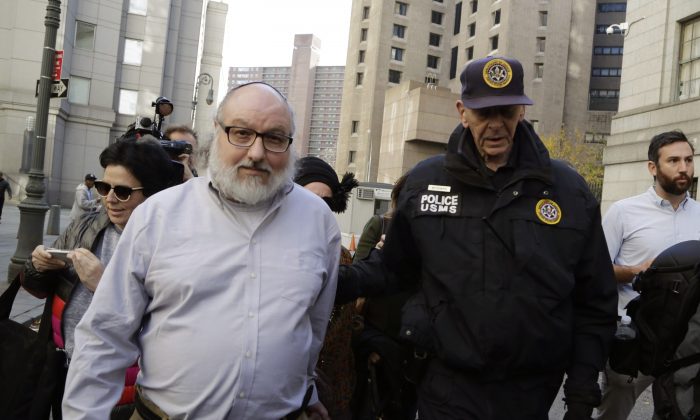 Convicted Spy Pollard Is Released After 30 Years Behind Bars

NEW YORK— Jonathan Pollard was released from prison Friday after 30 years behind bars for spying for Israel, his case a longtime irritant in relations between the two allies. His lawyers immediately went to court to challenge parole conditions that would let the government track his movements and monitor his computer use.

The pre-dawn release from a federal prison in Butner, North Carolina, gave Pollard his long-sought freedom, but the legal and diplomatic wrangling that has defined the case continued.

Hours after he was driven away from the prison, the 61-year-old Pollard checked in with probation officers at a federal courthouse in New York City, then emerged into a throng of journalists. He wore loose-fitting khakis, a blue yarmulke and a slight smile.

“I can’t comment on anything today,” the Navy intelligence analyst said, his wife, Esther, on his arm. One of his lawyers and a U.S. marshal, grasping Pollard firmly by the arm, escorted him through the crowd of jostling photographers to a car.

Within hours of his release, Pollard’s attorneys filed court papers in New York challenging his “onerous and oppressive” parole conditions.

Those include a requirement that he wear a GPS ankle bracelet and submit to inspections of his computer at his home or at his job, which his lawyers said will be in the finance department of a New York investment firm.

Pollard’s lawyers complained that wearing a GPS monitor would be harmful to his health because he has severe diabetes and chronic swelling in his legs and ankles. They said the computer monitoring is unnecessary because he no longer possesses any useful classified information.

His supporters, who have long maintained that he was punished excessively for actions taken on behalf of an American ally, are pressing President Barack Obama’s administration to permit him to move immediately to Israel despite parole requirements that he remain in the U.S. for at least five years. Those supporters include Israeli Prime Minister Benjamin Netanyahu, who applauded Pollard’s freedom.

“The people of Israel welcome the release of Jonathan Pollard,” Netanyahu said in a statement. “As someone who raised Jonathan’s case for years with successive American presidents, I had long hoped this day would come.”

The White House renewed its longstanding opposition to the request that Pollard be allowed to leave the country. Deputy national security adviser Ben Rhodes said Obama has no plans to alter the parole conditions.

Pollard was given a life sentence in 1987 for providing large amounts of classified U.S. government information to Israel. He was granted parole over the summer.

His was among the highest-profile spy sagas in modern American history, a case that became a diplomatic sticking point. Supporters praised him for aiding an ally, while critics called him a traitor to his country.

“I don’t think there’s any doubt that the crime merited a life sentence, given the amount of damage that Mr. Pollard did to the United States government,” said Joseph diGenova, who prosecuted the case as U.S. attorney in Washington. “I would have been perfectly pleased if he had spent the rest of his life in jail.”

Seymour Reich, a former president of B’nai Brith who visited Pollard twice in prison, said that while he believes Pollard broke the law and deserved to be punished, his sentence was overly harsh. Like other supporters, he said Pollard was “double-crossed” into thinking he would receive leniency in exchange for a guilty plea.

U.S. officials have said Pollard, over a series of months and for a salary, provided intelligence summaries and huge quantities of classified documents on the capabilities and programs of Israel’s enemies. He pleaded guilty in 1986 to conspiracy to commit espionage.

Israel initially claimed that Pollard was part of a rogue operation but acknowledged him in the 1990s as an agent and granted him citizenship.

Although he has said his guilty plea was coerced, he has also expressed regret for his actions, telling The Associated Press in a 1998 interview that he did not consider himself a hero.

“There is nothing good that came as a result of my actions,” he said. “I tried to serve two countries at the same time. That does not work.”

Last year, the U.S. dangled the prospect of freeing Pollard early as part of a package of incentives to keep Israel at the negotiating table during talks with the Palestinians. But the talks fell apart, and Pollard remained in prison.

The decision to grant him parole came amid a public disagreement between the U.S. and Israel over a nuclear deal with Iran. But U.S. officials have said the decision to let Pollard out on parole had nothing to do with that deal and was not meant as a concession for Israel.