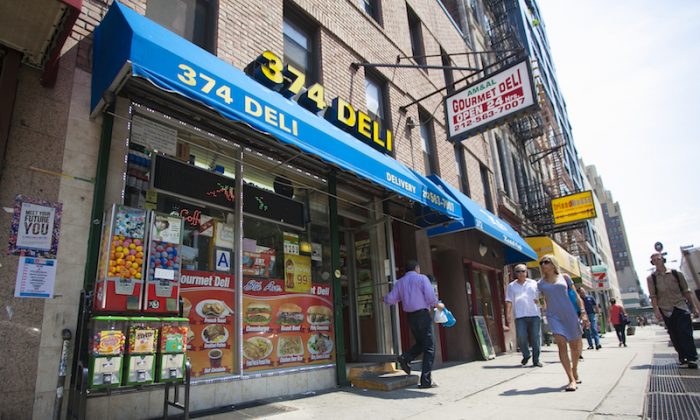 A deli in the Chelsea neighborhood in New York, July 8, 2014. Small companies like these are responsible for most of the job creation in America. (Samira Bouaou/Epoch Times)
Viewpoints

Convenience Services: A Bellwether for a Strong Economy

From where we sit, the U.S. economy is firing on all cylinders.

America’s unemployment rate currently stands at 4 percent—one of its lowest points since the late 1960s. Average hourly earnings rose 2.8 percent through May, the largest expansion since the Great Recession. Economic growth, meanwhile, is expected to remain at 3 percent or higher this year—up from 1.9 percent at the end of 2016.

Working Americans are feeling it, too. According to a recent University of Michigan survey, U.S. consumer confidence hovers around an all-time high, as American shoppers are “buoyed by strong economic growth, low unemployment, and rising wealth levels.”

In states like California, New York, and Texas, convenience services operators not only contribute billions of dollars in economic output, but they are also some of the largest employers. Nationally, the convenience services industry boosts the U.S. economy by creating and supporting more than 140,000 jobs, with estimates topping $7.2 billion wages paid to employees.

At the National Automatic Merchandising Association (NAMA), we work with small-business owners—men and women who operate vending, micro market, office coffee, and pantry services as well as foodservice businesses. From Silicon Valley to Des Moines to Wall Street, these companies provide other businesses, large and small, with food and beverages that power their employees’ productivity. And these suppliers can personally attest to the more favorable business environment of today.

Tax policy is a prime example. Convenience services operators contribute over $3.5 billion in taxes at every level of government. But they now carry a lighter load because of the Tax Cuts and Jobs Act, which reduced the corporate rate and expanded deductions for small businesses.

For years, the federal government has applied an estate tax to property transferred at death if the value of the property exceeded the estate tax exemption—about $5.5 million before the recent tax overhaul.

This was a crippling burden for family-owned businesses, many of which operate in the convenience services industry as multi-generational enterprises. A large portion of their business’ value is tied to assets such as land, buildings, and equipment. In many cases, the death of a business owner forced his or her successor to sell the business or its assets simply to cover the estate tax liability.

Fortunately, the Tax Cuts and Jobs Act doubled the estate tax exemption to roughly $11.2 million for an individual and $22.4 million per married couple. This insulates small businesses from premature fire sales and leaves them with more resources for capital investment, business expansion, and job creation.

Now it’s up to industry leaders to communicate this pro-business message to elected officials—and thank them for enacting business-friendly policies. NAMA is doing just that: On July 25th, NAMA’s annual Fly-In will bring more than 300 industry leaders to Capitol Hill to praise Congress’ work on tax reform and discuss the pressing issues facing small business. More than 200 meetings are planned with members of Congress—on both sides of the aisle.

The catalyst for our success is clear. When business and government work together, the U.S. economy, small-business owners, and consumers all reap the benefits.

Carla Balakgie is president and CEO of the National Automatic Merchandising Association (NAMA), which represents the $25 billion convenience services industry.