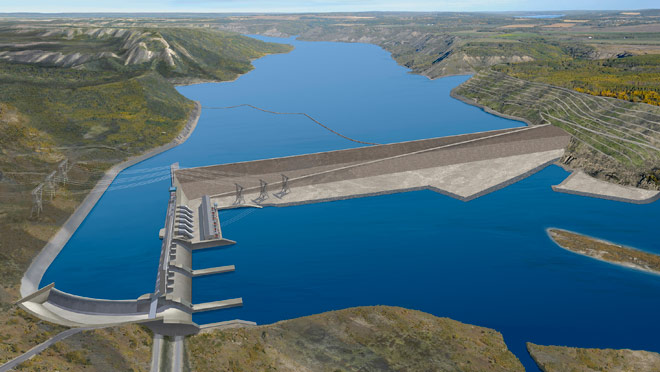 Artist rendering of the proposed Site C Dam. The controversial project would endanger the health of the Peace River, according to the Outdoor Recreation Council of B.C. (Courtesy BC Hydro)
Canada

The Peace River in northeastern British Columbia will be the province’s most endangered river if the controversial Site C dam is approved, according to a new report.

The Outdoor Recreation Council of B.C. (ORC) released its list of B.C.’s most endangered rivers on Monday, citing the Peace, Fraser, and Elk Rivers as the top three most endangered in the province.

The Peace topped the list for the first time, says ORC spokesman Mark Angelo, after the group’s 100,000 members—comprising local First Nations, biologists, ranchers, guides, residents, and visitors to the area—overwhelmingly nominated the waterway over any other river.

“Clearly local opposition to the dam is widespread and passionate amongst both aboriginal and non-aboriginal groups,” says Angelo. “There’s this very, very extensive opposition.”

ORC says BC Hydro’s Site C Clean Energy Project—a proposed dam and hydroelectric generating station on the Peace River near Fort St. John—poses a threat to the local fish and wildlife habitat as well as sacred cultural sites, and would severely diminish the area’s recreational value.

Site C would be the third dam on the river.

The dam would measure 60 metres high and 1,050 metres long and would flood an additional 83 kilometres of the river, resulting in the loss of 5,000 hectares of boreal forest and 5,000 hectares of productive farmland. It would also flood the only Class 1 agricultural land north of Quesnel, B.C.

“There are many, many environmental impacts. And then over and above that it’s a dam that’s going to cost $8 billion, and that’s a heavy price tag for B.C. Hydro—a crown corporation that already has a huge debt that’s close to being unmanageable,” says Angelo.

The most recent BC Hydro electricity forecast shows no existing domestic need for the dam, and according to the ORC report, B.C. currently has a surplus of power for domestic use expected to last for at least several more years.

However, BC Hydro and Premier Christy Clark have said Site C is necessary to meet the province’s future electricity needs, in light of population increases and future liquid natural gas projects, if demand continues to grow as projected.

“BC Hydro forecasts that the province’s electricity needs will grow by approximately 40 percent over the next 20 years,” says the company’s website.

“This increase in demand is being driven by a projected population increase of more than one million residents and economic expansion. With Site C, BC Hydro is planning now so that British Columbians will continue to benefit from clean, reliable and cost-effective electricity in the future.”

The project is now in the environmental and regulatory review stage, which includes an environmental assessment process. The period for submission of written commentary closed April 4, and a joint review panel will soon be appointed by the federal and provincial governments.

After the review process is completed, the dam could potentially be approved by next year.

Raising Awareness of Threats to Rivers

This year marks ORC’s 21st annual “most endangered rivers list,” the most comprehensive initiative of its kind in Canada. It aims to provide a snapshot of the issues that face rivers and the threats to their ecological health.

ORC decreased the number of rivers on the list from its usual ten down to three this year, in part due to the overwhelming number of votes for the Peace.

“The annual endangered rivers release, now in its 21st year, helps to create a greater awareness of the many threats that confront our waterways,” Angelo said.

“And while we should be strengthening mechanisms to protect rivers, the ORC is dismayed by the recent weakening of habitat provisions in federal river-related legislation, such as the Federal Fisheries Act and the Navigable Water Protection Act.”

ORC named the lower Fraser the second most-threatened river on its list, especially between Hope and Mission, due to development pressures from nearby city centres.

“Given its proximity to greater Vancouver, this extraordinary part of the Fraser faces an assortment of development pressures and is in severe need of a collaborative plan if its many values are to be protected,” Angelo said.

Elk River near Fernie holds the third most endangered spot due to rising levels of selenium, a toxin found in runoff from nearby open-pit coal mines.

“While the province recently announced a moratorium on new coal mines until selenium pollution is controlled, there must be a much more expedited effort to reduce toxic run-off from existing mines,” said Angelo.