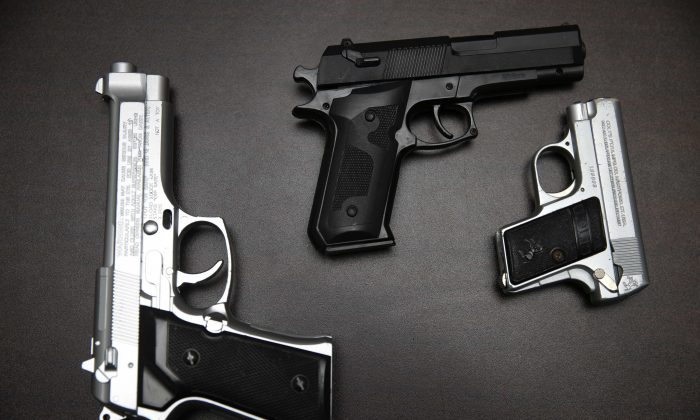 Fake guns are displayed with other prohibited carry-on items during a news conference at John. F. Kennedy Airport in New York, Tuesday, Nov. 18, 2014. The Transportation Security Administration displayed thousands of items on Tuesday that were confiscated from carry-on bags over three months at New York's Kennedy Airport. As the chaotic holiday travel season approaches, the agency wanted to remind the public what carry-on items were no-no's. (AP Photo/Seth Wenig)
US

Captured on video, 38-year-old James Boyd was illegally camping in the Albuquerque foothills on March 16, when he was approached by multiple police officers, who woke him up and tossed a stunning flash-bang grenade at him when he tried to pick up his belongings. They then shot him repeatedly while in a obviously disoriented state he reached for a knife. He died the next day.

The unarmed 18-year-old African-American college student’s life ended on August 9, by Caucasian 28-year-old police officer Darren Wilson. Brown was stopped by Wilson because he matched a robbery suspect description. In an ensuing altercation, of which the eyewitness details vary tremendously, Wilson discharged his weapon 12 times, killing Michael Brown. Video of Officer Wilson arresting a man for videotaping him has emerged. Wilson resigned as a police officer after a Grand Jury failed to indict him.

31-year-old mentally ill Dontre Hamilton was shot 14 times on April 30 by Officer Christopher Manney. The officer went to a downtown park to check on the sleeping man, and according to his story, realized the man was mentally ill and began immediately frisking him in a unprofessional manner, even though the man had committed no crime. Hamilton resisted this search, and the two exchanged blows before Hamilton got a hold of Manney’s baton and held it “in an aggressive posture”. It was at this point Christopher Manney opened fire ending Dontre Hamilton’s life. Manney was fired 8 months later.

A 12-year-old boy playing with a BB gun at Cudell Recreation Center was shot twice by 26-year-old Timothy Loehmann within two seconds of arriving on the scene. Tamir Rice died soon after being shot. The incident was captured on video.