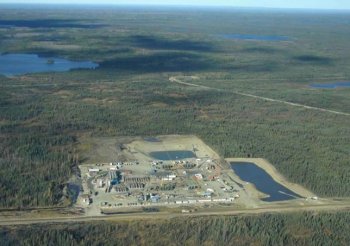 Controversial ‘Fracking’ Comes Under Increased Scrutiny in US

With concerns mounting in North America and parts of Europe regarding the controversial use of hydraulic fracturing in natural gas extraction, a U.S. federal agency has announced a series of public forums to discuss the technique.

The US Bureau of Land Management said Monday it would hold the forums in late April to ensure that oil and gas development on federal lands is taking place in a responsible and environmentally sustainable manner.

This comes as several jurisdictions are rethinking the use of so-called fracking until more is known about its effect on the environment.

In March, Quebec put a stop to all fracking operations—which involve forcing copious amounts of water, sand, and chemicals at high pressure into shale gas deposits to fracture the rock and release the gas—until an environmental evaluation is completed.

Several U.S. jurisdictions and states have imposed moratoriums or outright bans on fracking until studies can be carried out on its environmental impact. France has also halted its use over concerns that not enough is known about the long-term effects of the extraction method on air and water supplies.

Hydraulic fracturing is preferred by the industry because it enables the extraction of oil and gas from rock formations deep below the earth’s surface at an economical rate. First used by Halliburton in 1949, the process is now used worldwide in tens of thousands of oil and natural gas wells.

Critics claim that the chemicals used in the “dirty” process of fracking contaminate underground water supplies and cause health problems for people living near the wells. Exactly what those chemicals are is largely unknown, as some of the big industry players, such as EnCana, Halliburton, and Schlumberger—all of which operate in Canada—are notoriously secretive about the ingredients in their fracking fluids.

Fracking has become a huge controversy in the U.S. and legislation is before Congress that, if passed, would impact the multi-billion dollar industry.

It is also becoming a big issue in Canada, particularly in Alberta and B.C. In B.C., however, Energy Minister Rich Coleman said recently that fracking is not a concern because gas companies have to meet the province’s “stringent” environmental regulations.

But Will Koop, president of the BC Tap Water Alliance, says there has been a lack of cumulative studies done on the harmful effects of fracking, which he calls a “really critical” oversight given the pollutants associated with the process.

“From our point of view, and the view of many Quebecers and other Canadians, the shale gas developments across Canada are proceeding far too quickly without understanding the cumulative environmental and social consequences.”

Koop claims the developments in Northeastern B.C. are “irresponsible and not in order,” and that stronger and better provincial and federal environmental laws are needed.

In February, Koop gave a presentation to the federal Standing Committee on Natural Resources in Ottawa, countering industry claims to the committee that fracking is safe and effectively regulated.

Across the U.S., state regulators have documented over 1,000 cases of groundwater contamination linked to fracking practices. In Canada, particularly near Rosebud Alberta, some residents are blaming fracking contaminants in their water supply for skin problems, pets refusing to drink the water, and most famously, tap water being ignited with the flick of a lighter.

Kevin Heffernan, VP of the Canadian Society for Unconventional Gas, whose board of directors herald from North America’s major oil companies, says the industry has been conducting “safe hydrolic fracturing for many decades.”

He points to a 2009 environmental impact assessment carried out in New York State which concluded that the risk from hydrolic fracturing is “close to zero.”

“The issue is not hydraulic fracturing—the primary issue is that people don’t understand it first of all, and sometimes operators will have spills or other surface incidents or they will have a faulty construction,” says Heffernan.

“We do tens of thousands of these well constructions every year so it’s not unreasonable to expect, like any construction activity, or any industrial activity, there is going to be one or two where there's a problem.”

As for whether the industry should re-evaluate the technique in light of public health concerns, Heffernan says, “It depends where you are, let’s put it that way. There are very good regulations in place in Alberta and B.C. and the processes are well known.”

Activist groups say one of the main problems is the lack of impartial regulation. The industry in B.C. is regulated by the Oil & Gas Commission (OGC), which to date has never refused to grant a contract to any oil company wishing to use fracking.

Regulations were also questioned in the U.S. after citizens whose water supplies had been contaminated by drilling sites set up near their homes were unable to get a meaningful response to their appeals.

The Oscar-winning documentary, “Gasland,” revealed the oil and gas industry has pressured the EPA to avoid an environmental investigation into fracking.

A big concern for environmental groups is the staggering volumes of water needed for fracturing. Often this water is obtained from freshwater sources, and becomes too contaminated during the process to be reused.

Ben Parfitt, a resource policy analyst with the B.C. office of the Canadian Centre for Policy Alternatives and author of the report, “Fracture Lines: Will Canada’s Water be Protected in the Rush to Develop Shale Gas?” said the government needs to take regulatory action sooner rather than later.

“These are early days yet for shale gas development, yet we know that the industry is setting records for water usage,” he said in a presentation to the Standing Committee on Natural Resources last December. “In the Horn River basin roughly 900 cubic metres of water was used, to set a world record for fracking operations in a single, multi-well pad.”

He also said that as of April 2010, the OGC has issued approval for energy companies to divert water from 540 different points on creeks, rivers, lakes and reservoirs in Northeastern B.C. Under the maximum permit allowance, the water consumption by energy companies can be twice the daily water usage of all residents and businesses in Victoria, whose population is approximately 370,000.

According to a 2010 report by Koop, there has been no examination of the combined water usage of all the companies developing in B.C.’s Northeast region and the implications for the water supply.