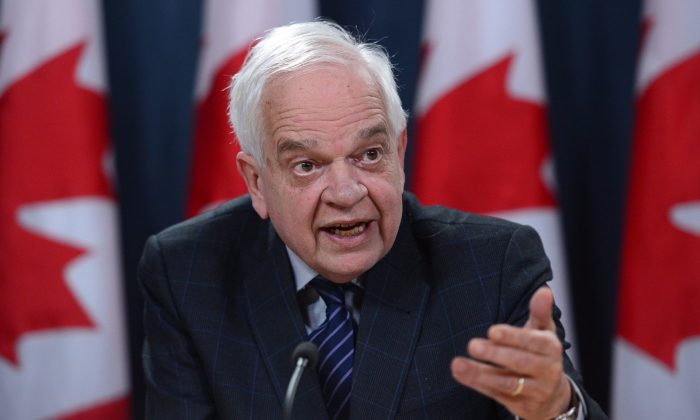 Immigration Minister John McCallum speaks during a press conference at the National Press Theatre in Ottawa on Dec. 14, 2016. (The Canadian Press/Sean Kilpatrick)
Canada

OTTAWA—The federal government is scrapping an immigration application system that saw some Canadians paying hundreds of dollars to ensure paperwork to sponsor family members was at the top of the pile.

The Liberals announced Wednesday, Dec. 14, that instead, applications for the coveted parent and grandparent visa program will now be selected by lottery, and not by which ones arrive first.

Beginning Jan. 3, Canadians will have 30 days to fill out an online form indicating their desire to sponsor someone. From those, immigration officials will randomly draw 10,000 individuals who will then be asked to submit the full application within 90 days.

The change comes after The Canadian Press reported earlier this year that the old first-come, first-serve system was seeing couriers charge more than $400 to guarantee applications would be at the top of the pile.

The popular parent and grandparent program routinely receives thousands more applications than there are spaces.

That raised concerns that the visas were going to those who could afford to pay the high fees or camp out for hours at the Mississauga, Ont., immigration office—the only place in Canada accepting the forms.

“We’re ensuring everyone can access the application process by giving them the same chance to have their name chosen,” he said in a statement.

The popular parent and grandparent program routinely receives thousands more applications than there are spaces. Last year, 14,000 applications were received for what was initially only 5,000 spots.

That level had been set by the previous Conservative government after it closed the program entirely in 2011 to spend three years whittling away a massive backlog. When the program was re-opened in 2014, the government put an annual cap on applications of 5,000 while it continued to work on the backlog.

The Liberals raised the intake to 10,000 last year and will accept the same number of applications for 2017. While the online form to indicate interest will be available starting on Jan. 3, the full application will not be posted until Jan. 9.