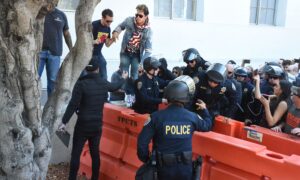 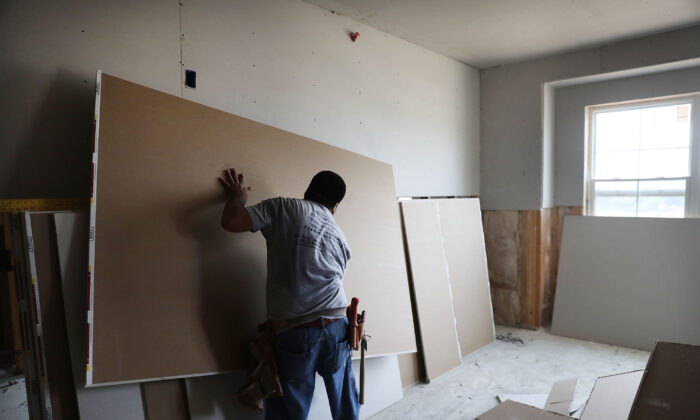 A worker hangs drywall in in Hamden, Conn., on Aug. 2, 2017. In a controversial decision Judge Carlos Murguia threw out the convictions of two illegal aliens from Mexico, whom a jury found guilty of conspiring to encourage illegal aliens to remain in the United States through employment at a drywall company. (Spencer Platt/Getty Images)
US News

A federal judge in Kansas who struck down a law that prevents people from “encouraging” or “inducing” illegal immigration has resigned after being reprimanded for sexual harassment.

The jurist is Judge Carlos Murguia of the U.S. District Court of Kansas, who was appointed to the bench by former President Bill Clinton in 1999. Oral arguments will take place at the Supreme Court on Feb. 25 in an appeals court ruling now under appeal that was a factor in the judge’s controversial ruling.

As The Epoch Times reported last year, Murguia previously worked for El Centro Inc., a left-wing nonprofit based in Kansas City, Kansas, that is an affiliate of UnidosUS. UnidosUS is the new name for the National Council of La Raza (“La Raza” is Spanish for “the race”), a large open-borders group headed by the judge’s sister, Janet Murguia.

Another sister, Mary Murguia, is a judge in the 9th Circuit Court of Appeals, who, at one time, recused herself from a trial involving then-Sheriff Joe Arpaio of Maricopa County, Arizona, who was strongly pro-enforcement, because her sister was president of La Raza.

On Feb. 18, Judge Carlos Murguia tendered his resignation, effective April 1, in a letter to President Donald Trump, writing it had “become clear that I can no longer effectively serve the court in this capacity.”

“I therefore tender my resignation with a heavy heart and profound apologies, out of respect for the federal judiciary, my colleagues, my community and—most importantly—my family,” Murguia wrote, The New York Times reported.

Murguia resigned “without eligibility for pension or any retirement benefits,” Chief Judge Julie A. Robinson of the U.S. District Court in Kansas City told the newspaper.

Murguia will reportedly be the third federal judge to exit the judiciary in four years after being accused of harassment or misconduct. In 2017, Alex Kozinski, a judge on the 9th Circuit Court of Appeals, resigned after several women claimed he sexually harassed them. In 2016, a U.S. District judge in Texas, Walter S. Smith Jr., left his post after similar accusations.

“Harassment and discrimination in the federal courts is not an issue of one bad apple; it is a systemic problem,” House Judiciary Committee Chairman Jerrold Nadler (D-N.Y.) said in a statement Feb. 19.

The resignation comes as the Supreme Court prepares to take up U.S. v. Sineneng-Smith on Feb. 25.

Citing that ruling by the 9th Circuit Court of Appeals, on Aug. 21, 2019, Murguia threw out the convictions of two illegal aliens from Mexico, Jose Felipe Hernandez-Calvillo and Mauro Papalotzi, whom a jury found guilty of conspiring to encourage illegal aliens to remain in the U.S. through employment at a drywall company.

The Immigration and Nationality Act provides for as much as five years in prison for anyone who “encourages or induces an alien to come to, enter, or reside in the United States, knowing or in reckless disregard of the fact that such coming to, entry, or residence is or will be in violation of law.” Another five years imprisonment may be added to the sentence if the defendant acted “for the purpose of commercial advantage or private financial gain.”

Murguia ruled the statute runs afoul of the First Amendment because it has the effect of criminalizing protected speech.

“Finding no basis to distinguish or criticize Sinening-Smith’s analysis from the government’s arguments or its own review of the relevant law, the court adopts that analysis in full, and agrees that on its face, Subsection A 4 is overbroad under the First Amendment,” the judge said, according to a transcript of his ruling on a motion to dismiss that was obtained by The Epoch Times.

At Conservative Review, Daniel Horowitz criticized Murguia’s decision, writing that the ruling was “ridiculous because the law clearly refers to engaging in subversive and fraudulent activities to encourage or enable actual individual aliens to remain in the country, not mere political advocacy for liberal immigration policies in the abstract.”