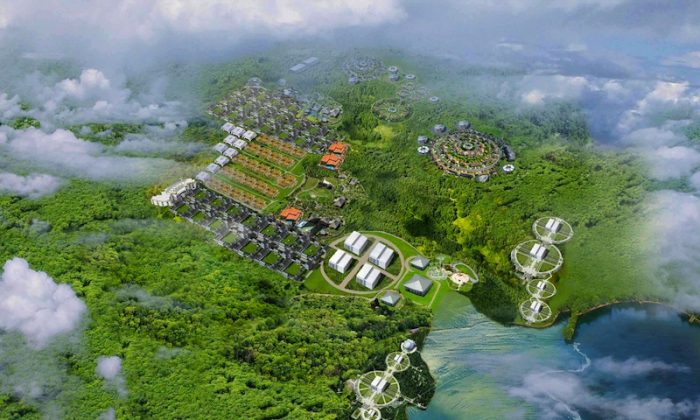 A rendering from 2013 of the China City of America Thomspon Education Center, a proposed college in the upstate New York town of Thompson. (Shepstone Management Company)
NY News

Project to come before planning board on Sept. 13
By Holly Kellum
Print

The Thompson Education Center (TEC), which is predominantly in the Town of Thompson with a portion in the Town of Fallsburg, was first proposed in 2013 as China City of America, a “Chinese Disneyland”  with an amusement park, an education center, a hotel, housing, and a mall.

Over time, the project was whittled down to just the education center with some on-campus housing, a hotel, a museum, a library, and other education-related buildings.

The various incarnations of the project have received a warm welcome by local development and tourism organizations, but it’s also facing opposition from locals who see it as out of place in their bucolic community, and a threat to the environment and their way of life.

Developer Sherry Li could not be reached for comment for this article, but initially the project was to be partially funded through EB-5 investment.

In a December 2013 press release, Li said she chose the Town of Thompson to build China City of America “because it clearly fits within the United States Citizenship Immigration Services (USCIS) target area definition for the EB-5 program.”

The federal EB-5 program lets foreigners who invest a minimum of $500,000 in rural or high unemployment areas get temporary green cards and eventually citizenship for themselves and their family. The minimum investment amount increases to $1 million for non-rural and high-employment areas, and investors must prove that they have created at least 10 full-time American jobs over two years.

While it has drawn billions of dollars to the United States for everything from infrastructure projects to luxury hotels, the program has come under fire for creating a two-tier immigration system that is ripe for abuse.

A White House spokesman told USA Today in July that the administration is “evaluating wholesale reform of the EB-5 program to ensure that the program is used as intended.”

Although it won’t be substantially changed in the near future (Congress passed a resolution that would continue it at least through December), Chinese nationals would be the most affected if it were—at least 80 percent of the program’s applicants are Chinese. It is so popular with Chinese nationals that there is currently at least a six-year wait period for approval, said LA-based immigration attorney Ashkan Emami with Path Law Group. For applicants from other countries, he said it’s about a two-year wait.

“The Chinese have reached the quota of EB-5 visas—they have for the past several years. So they have to wait in line until other Chinese applicants before them have their cases processed,” he said.

Li said earlier in May 2013 that the project would produce 15,000 both direct and indirect jobs.

Despite the scaled-down size of the current project, a January press release says that the Thompson Education Center (TEC) could create as many as 3,000 long-term jobs and up to 20,000 jobs in total throughout the life of the project.

It’s unclear, however, what has happened to the plan to use EB-5 funding. China City applied in 2011 to be an EB-5 regional center, an organization permitted by the United States Citizenship and Immigration Services (USCIS) to sponsor capital projects for investment by EB-5 investors. In some cases, the regional center is set up to service one particular project, but in most cases it works with multiple projects.

China City Regional Center, the name on the application, does not appear on the USCIS’s list of active regional centers, nor on the list of those that have been shuttered.

It’s possible the project is working with another regional center, but because of privacy laws, it’s difficult to obtain information on EB-5 projects.

“Unfortunately, we cannot give any specific information about specific applications for privacy reasons,” USCIS spokesperson Katie Tichacek said in an email when asked about TEC’s regional center application.

Even if the Chinese City Regional Center gets clearance from USCIS, Li may face hurdles getting money out of China.

The Chinese regime has been trying to minimize currency outflow as Chinese investors seek to park their wealth in stable economies like the United States and Europe.

The government has limited the amount of cash Chinese nationals can transfer out of the country to $50,000 a year, and any overseas transactions with a Chinese credit card over $148 must be recorded and sent to government regulators.

According to Wang Chunying, a spokesperson at the Chinese State Administration of Foreign Exchange (SAFE), the regulators are focusing their attention on cross-border deals in real estate, hotels, entertainment, cinemas, and sports clubs.

The China City of America website hosts a plethora of press releases touting the job-creating impact the project will have on the local economy. While the project is still very much in its infancy, it so far has not shown a good track record of creating new jobs.

Two firms that were hired by Li subsequently sued her and China City for non-payment.

Environmental and real property attorney Jacob Billig claimed in a January 2016 lawsuit that Li stiffed him out of $25,000; Li claimed Billig was doing work that she didn’t ask him to do that was not related to the project. The case was settled for $12,500, the Times Herald-Record reported.

Project engineer Kenneth Ellsworth of Keystone Associates also claimed in a February 2016 lawsuit that China City never paid him for $35,000 worth of work, and asked for another $100,000 on top of that for “lost work” according to a Times Herald-Record report.

While it’s possible Li was not satisfied with work done on her project, it’s unlikely that she was strapped for cash. In addition to $55,000 she gave to Democratic New York Governor Andrew Cuomo’s 2014 re-election campaign, Li drew headlines this year for her large donations to Donald Trump and Republican organizations.

Li and Mike Wang, a board member and general manager of TEC, donated a combined $600,000 to Trump Victory, a committee that the president and Republican National Committee created to attract wealthy donors.

Li also donated $47,000 to the committee working to keep the House in Republican hands and another $5,400 to its chairman, Rep. Steve Stivers (R-Ohio), Federal Election Commission records show. Last October, she gave more than $32,000 to the Republican National Committee.

Li has also sought publicity for her donations to local organizations like the Wallkill Boys and Girls Club and the Catskill Regional Medical Center, as well as to her ties to Trump.

Li attended Trump’s Inauguration as well as his Victory Reception beforehand, and one article on Chinese media site Sing Tao Daily claims she is a member of the “U.S. Republican Finance Committee.” Neither her LinkedIn profile nor any other public records back that up.

The Sing Tao article heavily quotes the deputy director of a Chinese economic research center saying that together, overseas and mainland Chinese can rejuvenate the “Chinese Dream,” (he calls Li  an unofficial ambassador of the Chinese people in the United States).  Li, however, seems to be more of a believer in the “American Dream.”

“The goal of the Thompson Education Center project is in line with President-elect Trump’s new policy, together we can “Make America Great Again!” says a January press release.

What exactly the Thompson Education Center is going to be has been a point of contention.

After Li scaled back her plans for an amusement park, changed the name from China City of America to Thompson Education Center, and said the site would be on a mere 570 acres instead of 2,200, Li was quoted in an Associated Press article saying the project would eventually grow to its original scope.

“We haven’t cut back our sizes,” Li was quoted by the newswire as saying. “We’re going to be doing it step by step.”

After that article came out, Thompson Supervisor Bill Rieber told Li at a Planning Board meeting: “There’s nothing to review … unless they tell us the truth,” reported the Times Herald-Record.

Town of Thompson Planning Board attorney Paula Elaine Kay denied that this was the reason the application lay dormant for almost two years, but referred questions to Li and her attorney.

Current plans for housing on the site call for eight dorm buildings for 2,508 students, another 86 faculty boarding houses for 276 faculty, and 22 houses for a “Founding Trustee Village,” as well as a president’s house.  Another 250 students and 124 faculty would live off campus and commute, according to an April scoping document.

The proposal for the campus includes a medical center, a business center, a library and museum, an art center, a stadium, and four classroom buildings, among others.

Upon site plan approval, TEC is planning to seek a charter from the New York State Education Board of Regents  to become a college, the applicants said in a March Environmental Assessment Form.

It is also seeking affiliation with other accredited institutions.

TEC press releases say the school has “entered into agreements and signed letter (sic) of interests (sic) with high schools, colleges, education institutions and systems both in U.S. and China.”

However there are no names listed anywhere, even in the list of Chinese organizations that have supposedly formed “educational partnerships” with TEC. Descriptions like “an overseas service company from Sichuan” and “a university from Guangdong” are representational of the list.

SUNY Sullivan, with which TEC planned to pursue a partnership, said it has not signed any letters of interest.

“To date, the TEC has reached out to discuss potential partnerships with SUNY Sullivan and the college is in the process of reviewing that information,” SUNY Sullivan spokesperson Cindy Kashan said in an email.

What is certain is that the intent is to create a community around higher education, and that it will cater primarily to Chinese nationals, although Americans and other international students would be admitted as well.

The project has come under fire from local residents because of it’s proximity to sensitive ecosystems—its buildings are wound around a state-protected wetland called the Harlen Swamp Wetland Complex.

The Basha Kill Area Area Association (BKAA), which oversees the health of the Basha Kill wetlands in the adjacent town of Mamakating, is concerned that effluent, besides being discharged into the Harlen Swamp Wetland Complex, would trickle down into the Basha Kill since it is within the same rainshed.

BKAA President Paula Medley says she’s also concerned about the density and the amount of impervious surface area proposed for the site.

“It’s just really an off-the-wall project quite frankly,” she said. “In Sullivan County, there’s so many buildings that are unoccupied …  there are places where there’s already a footprint, a development foot print, and we would strongly suggest that some place like China City or TEC, instead of going into—lets call it like a virgin area—and cutting down trees and messing everything up, that you just deal with an area that’s already been impacted.

“You’ll have less effect on the environment, and you’ll be doing a service by helping out an area that nothing’s happening with.”

Mamakating supervisor Bill Herrmann has also expressed environmental concerns, saying the hydro-geological study the town did showed that there was not enough water to support the plans for the site.

Kay said the Town of Thompson, as well as the applicant, will be conducting their own studies on water availability.

Before that can be done however, the state’s Department of Environmental Conservation has to validate the boundaries of the Harlen Swamp Wetland Complex.

“The project is really in the infancy stages,” Kay said.

TEC is set to next come before the Town of Thompson Planning Board on Sept. 13.