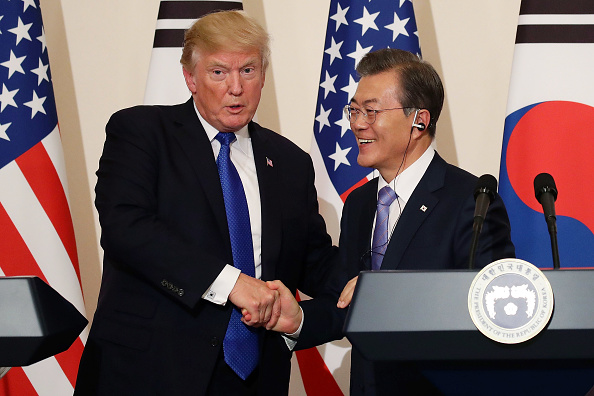 China’s state-run media have repeatedly criticized President Donald Trump since he announced trade tariffs on Chinese goods, setting off trade tensions. However, a state-run publication has recently made an about-face and changed its rhetoric completely.

The Paper, a state-run newspaper based in Shanghai, ran an editorial on May 1 saying that Trump should receive the Nobel Peace Prize for precipitating talks leading to promises of denuclearization from North Korea.

In a separate news report published on the same day, The Paper mentioned that South Korean President Moon Jae-in said at a cabinet meeting: “President Trump should receive the Nobel Peace Prize. What we need is peace.”

On April 27, Moon met with North Korean leader Kim Jong Un at Panmunjom in the demilitarized zone and signed a historic agreement, the Panmunjom Declaration, for an end to the Korean War and “complete denuclearization” of North Korea.

Current affairs commentator Tang Jingyuan analyzed Beijing’s intentions behind the suddenly positive coverage. He told The Epoch Times that as a U.S. delegation prepares to visit China on May 3 and 4 to discuss their trade relationship, Beijing is nervous. “Whether China and the U.S. can reach an agreement will not only affect the economy of China and the U.S., but also affect the direction of the world’s trade in the future,” he said. “So we see Beijing has done something to express their so-called goodwill to pave the way for their meeting.”

Beijing may also be trying to kiss up to Trump so that the administration does not come down too harshly during trade discussions, Tang believes.

“If the trade war continues, Beijing will definitely suffer big losses,” he said. “The sanction on ZTE is one such example.” The Chinese smartphone maker was recently punished by the U.S. government, whereby it prohibited all American firms from supplying tech parts or software to ZTE.

Tang added that the Chinese Communist regime has been displeased about the Panmunjom Declaration because Beijing was marginalized in the talks. The state-run newspaper Global Times expressed Beijing’s discomfort, as it especially mentioned that the Declaration refers to a future peace meeting between either three parties—the U.S., South Korea, and North Korea—or four parties, the U.S., China, South Korea, and North Korea. “This indicates that Beijing’s role is not essential. If the Trump-Kim summit is successful, then they won’t need Beijing to be involved. That is what makes Beijing very anxious,” Tang said.

Tang added that The Paper’s tone indicates China would like to recognize Trump’s leadership in Korean peninsula affairs, in the hopes that Beijing can still have a chance to be involved in peace talks—“because it involves Beijing’s economic and political interests,” Tang said.

Epoch Times staff member Luo Ya contributed to this report.