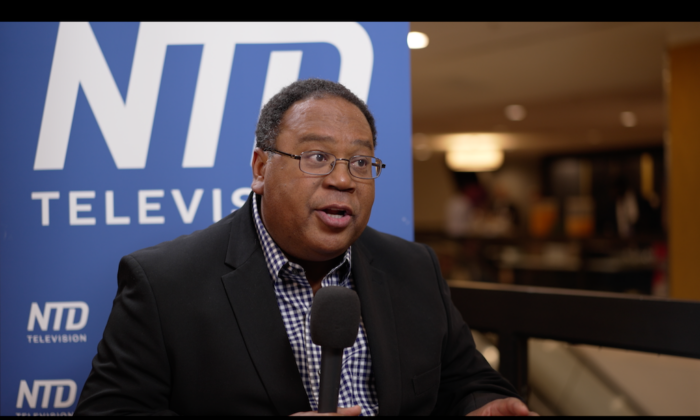 Horace Cooper, senior fellow at the National Center for Public Policy Research and chairman of the Project 21 National Advisory Board, in an interview with NTD on July 30, 2022. (NTD)
Policies & Impacts

Black Americans in urban areas are suffering the consequences of the progressive Democrats’ anti-police “soft on crime” policies, despite the fact that these are the communities the policies were supposedly going to help, said Horace Cooper, senior fellow with the National Center for Public Policy Research, in a recent NTD interview.

Cooper told NTD that because progressives Democrats are too soft on crime and conservatives are afraid of being called racist by the left, crime has come to an all-time high in urban areas and is disproportionately harming black people.

The black community wants criminals to be prosecuted, said Cooper.

Cooper is also chairman of the board for Project 21, which established a network of black conservative and libertarian leaders in 1992 to highlight the diversity of viewpoints within the black community.

Project 21 has identified 10 key areas for reform that, if accomplished, would help black Americans reach their potential and attain the American dream.

Cooper said that out of the 10 areas, one of the key issues that need to be addressed is the crime in black communities.

“We have a ‘Blueprint for a Better Deal for Black America’ that we’re releasing this fall, and one of the core issues is going to be the idea of crime control,” said Cooper.

Crime disproportionality affects black communities, and the people who live there don’t support policies like “Defund the Police,” he said.

“During the Rodney King riots, during George H.W. Bush’s presidency, there were a lot of voices that came out that said when you saw this violence, when you saw this mayhem, that it was justifiable. It was a natural outworking. ‘This is what blacks just do,'” Cooper said.

“In fact, most black Americans don’t believe that this kind of behavior is acceptable.”

In a Gallup poll conducted in June 2020 at the height of the George Floyd riots, 61 percent of black people surveyed said they wanted to keep the same level of policing in their neighborhoods, and another 20 percent said they wanted more police presence.

In late 2021, a consortium of news organizations surveyed 800 voters in Minneapolis, where George Floyd died in police custody, and asked them what they thought of the city’s police department. Three-quarters of the black respondents said the city shouldn’t reduce its police force.

Cooper said that Democrats and the Biden administration do not understand what the black community really wants, and instead perpetuate racist ideas about blacks.

“We’re seeing the outworking of that during the Biden administration, this tacit idea that it’s criminals who are the victims, and if you really want to support blacks, you’ve got to support criminals.”

In addition, Democrats install radical prosecutors who double-down on this narrative in Democrat-run inner cities, he said.

“We’re seeing what I would call the ‘woke prosecutors’ who actively say to criminals, ‘there will be no accountability. There will be no punishment.’”

Cooper said that while black men make up just 7.5 percent of the American population, they commit 40 percent of all violent crime.

“That’s staggering,” he said. “But these woke prosecutors and their supporters, they say, ‘Well, the truth is just America’s unfair, America is bigoted, America systematically mistreats,’ and that these people who prey on the rest of us, ‘They’re not predators. They’re just fighting back.'”

The problem with this narrative is that there is no evidence to support those claims, Cooper said. The way to stop this type of predatory behavior is to punish it, he added.

Cooper said that under President Donald Trump, black Americans were doing much better economically, and the number one issue for the community as a whole is not racism, but inflation, and how to give their families a great quality of life, “kitchen table issues,” said Cooper.

Under Trump, black Americans prospered, Cooper said, adding that as a whole, they were able to purchase new vehicles, open new businesses, put aside money for savings, and even take real vacations.

“In the last 18 months, all those trends have reversed,” he said. “And black Americans are being the hardest hit.”