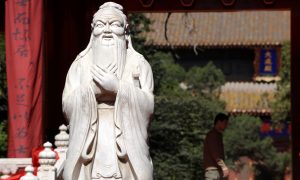 Contracts with Confucius Institute Reveal How Beijing Influences US Universities

Through public records requests in accordance with the Freedom of Information Act, Campus Reform obtained 32 universities’ contracts with the Confucius Institute Headquarters.

In several documents, Beijing dictated control over the curriculum taught within the Confucius Institute.

For instance, the contract between the University of Toledo and Hanban, the Confucius Institute Headquarters in China, states that “The Institute must accept the assessment of [Hanban] on the teaching quality.”

Hanban is an agency under the Chinese regime’s education ministry, which is known to severely censor language course material and distort history to mislead students in China.

Similarly, Central Connecticut State University agreed that “The University Institute shall review evaluations and recommendations made by the Confucius Institute Headquarters on the quality of the programs and make any necessary modifications.”

James Giordano, a professor of neurology at Georgetown University and a senior researcher in biosecurity, technology, and ethics at the U.S. Naval War College, told Campus Reform that the language in the agreements explicitly revealed that “what is taught, and what is promulgated at the Confucius Institute only occurs under the auspices of the central political system [of China].”

He believes that Confucius Institutes are not an independent entity, but a direct outreach program of the CCP, which controls American classrooms in an attempt to reshape people’s view about China.

“Any and all information that is promulgated through the Confucius institutes about China, the country, its history, its culture, its prior or current political status situation, posturing and or near term and intermediate to far term intent, in terms of engaging the global relationships is all done wholly under the auspices and examination of the [Chinese Communist Party],” he said.

Campus Reform quoted Seth Cropsey, the Director of the Center for American Seapower at the Hudson Institute, who said that surrendering academic freedom to a foreign nation hostile to the United States should raise serious red flags.

The existence of the Confucius Institute is “silly and pernicious on its face,” Cropsey remarked. “There are plenty of Americans who study Chinese political thought going back thousands of years… so it’s not necessary to go to an organ of the Chinese government in order to find… teachers who can teach.”

Although the Confucius Institute is advertised as a language and cultural exchange, Pompeo-led U.S. State Department designated it as a “foreign mission” of the People’s Republic of China, pointing out that the program operates “under guidance from the CCP’s United Front Work Department” and pushes out “skewed Chinese language and cultural training for U.S. students as part of Beijing’s multifaceted propaganda efforts.”

As early as 2014, the American Association of University Professors warned that Confucius Institutes further the political goals of Beijing’s leadership and threaten “the independence and integrity of academic institutions.”

Previously, Senator Marsha Blackburn of Tennessee and Senator Josh Hawley of Missouri pushed for legislation to close all Confucius Institutes in the United States or increase oversight. The Transparency for Confucius Institutes Act sponsored by Senator Blackburn passed unanimously in the Senate last year, but failed in the House of Representatives. She is continuing her effort this year. On March 29, she declared in a Twitter post: “Tennessee is determined to lead the way as the first state to ban the Chinese government-funded Confucius Institute from public universities.”

According to data from the National Association of Scholars, as of May 18, there are still 47 Confucius Institutes operating in the United States, including 41 inside universities and colleges, one at a private educational organization, the China Institute, and five at K-12 public school districts. Fifteen of these 47 Confucius Institutes are set to be closed before the end of this year.