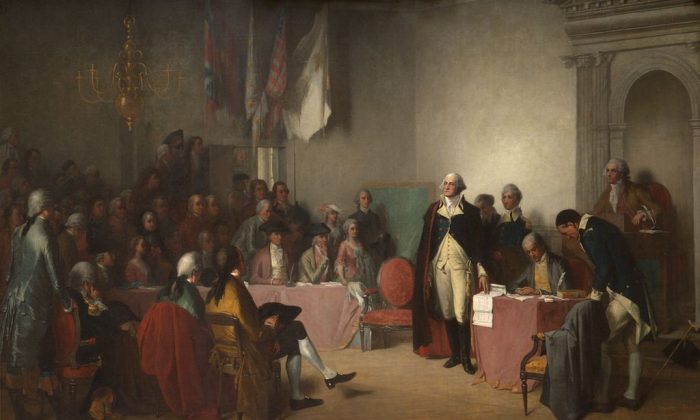 Washington Resigning His Commission. General George Washington resigned his commission as commander-in-chief of the Continental Army in the Old Senate Chamber of the Maryland State House on Dec. 23, 1783. Edwin White/Public domain
Viewpoints

This Feb. 22 marks the 287th winter since George Washington was born to Augustine and Mary Ball Washington. The second son of a moderately successful planter, he would, of course, rise to become one of the most consequential figures of the millennium.

Among his great attributes was his ability to exit his responsibilities on terms that left his station and those around him better than when he began.

Nowhere is that more the case than when he left the presidency in 1797. After establishing the office, setting the essential precedents, keeping the nation out of a foreign war, and loaning his valuable reputation to the cause of the new government, he left behind a “Farewell Address” that continues now, more than 200 years later, to be read each year on the floor of the U.S. Senate. But, how many pay attention to its chastising lessons?

Washington’s Farewell Address has as much to say to America today as it did to the America he left when he retired. It would be fitting and beneficial for all concerned Americans to read it anew on his birthday each year. Here are a few core lessons from Washington’s address that still speak to 2019 America.

He urged on us a fidelity to the Constitution and a resistance to what he called “the spirit of innovation” against its principles, changing the Constitution only through the approved amendment process of Article V. It isn’t hard to imagine what he would have thought of the modern Supreme Court’s discovery of a variety of rights not specified in the Constitution or Congress’s prescience to shirk its responsibilities through delegating its powers.

He warned against the “spirit of party” in a way that we could all use a reminder of today, where our conservatism has come to mean whatever the Republican president says it does at the moment, and the other party seems to stand for nothing more than the defeat of the incumbent.

Washington reminded us to stand by principles and patriotism and not parties or presidents. He reminded us that good, stable, constitutional government is based in serious deliberation on the common good and not partisan warfare. He urged us that no other appellation should surpass the common name of “American.”

He instructed us in language that would shock most modern ears, that “virtue or morality is a necessary spring of popular governments” and that public happiness depends on religion and morality, and, what is more—and what is borne out today daily in headlines from coast to coast—that morality can’t be expected to prevail in a world devoid of religion. “Of all the dispositions and habits which lead to political prosperity, religion and morality are indispensable supports,” he told us.

He warned us against permanent alliances and the need for impartial commercial relationships with foreign nations. And, as if speaking directly to the daily headlines of 2019, warned that against “the insidious wiles of foreign influence … the jealousy of a free people ought to be constantly awake, since history and experience prove that foreign influence is one of the most baneful foes of republican government.”

Those most actively supporting the Mueller investigation might find support in that warning. But, he added a caveat that we all should pay close attention to: “But that jealousy to be useful must be impartial,” he instructed, “else it becomes the instrument of the very influence to be avoided, instead of a defense against it.”

Washington predicted that foreign governments would use the political party system that might develop in the United States as a means of sowing division and gaining favor. But he also understood that there was an equally bad tendency of people to use such concerns for their own partisan agenda rather than for the good of the whole.

How prescient Washington’s Farewell Address seems to still be today, more than two centuries after it was offered to the American people. If we would return to it again on the day of his birth and meditate on his many lessons for the United States, we might end up being a better nation able to manage our journey together through the choppy waters of the 21st century.