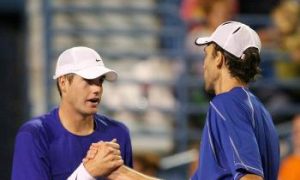 Clash of the Titans
0 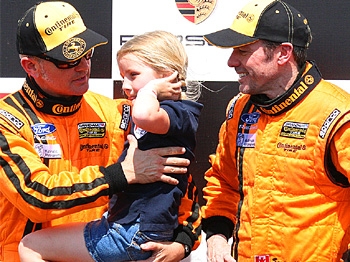 “We dropped back mid-field mid-race but the car was good and we came on strong at the end,” Scott Maxwell told Grand Am.com.

“Trying to catch [Bill] Auberlen is really tough—he is a great driver with a strong car, so I had to wait it out and be patient. Multimatic and Ford did a great job and Joe Foster did a great job, so it was a good day.”

Joe Foster praised Maxwell’s efforts. "At the end, it was a battle between everybody with no grip, and Scott won out. It was a fantastic day for us."

Joe Foster won the pole, his third at Barber in three races, and led the first 20 laps in a muscle car battle between Foster, Matt Bell in the #9 Stevenson Motorsports Camaro GS.R and Jack Roush Jr. in the #61 Roush Performance Mustang Boss 302R.

After a pair of cautions and some driver changes, Billy Johnson in the #61 Roush Mustang led John Edwards in the #9 Stevenson Camaro and Tonis Kasemets in the #46 Fall Line BMW.

After another caution on lap 40, the race restarted on lap 45 with Billy Johnson still in the lead, followed by the #00 CKS Autosport Camaro of Eric Curran and the #33 Kinetic Motorsports Kia of Bryan Sellers. Johnson pitted for tires on lap 48, giving Curran the lead.

Bill Auberlen at the wheel of the #96 Turner BMW had been moving up steadily since the green flag on lap 45, advancing four positions in two laps, then another two places in the next four laps, then taking the lead in the Hairpin on lap 52.

Auberlen, fresh off a win in the Rolex GT class, was primed for a second two-win weekend. (At Homestead, Auberlen and Dala Lana won both GT in the Grand Prix of Miami and GS in the Kia 200.) Scott Maxwell in the Multimatic Ford wanted to spoil Auberlen’s hopes.

A pair of cautions on laps 56 and 64, with only a lap of green-flag racing between them, kept the field leashed until lap 70, with only seven laps left.

Scott Maxwell in the Multimatic Mustang worked his way close to the #96 Turner BMW, finally squeezing ahead by inches at the start/finish line on lap 74. Maxwell led through Turn One and for the rest of the race.

"Bill (Auberlen) is very hard to pass, but he is very fair. If you stick it in there, you know he's going to give you space,” Maxwell said. “We have a lot of respect for each other."

Auberlen in the BMW held off the #46 Fall Line BMW of Tonis Kasemets, who tried to get by in the Hairpin, while Billy Johnson in the #61 Mustang moved in behind. Johnson captured third from Kasemets on the final lap.

John Edwards in the #9 Stevenson Camaro filled out the top five in the GS class.

The Continental Tire Sports Car Challenge travels to Virginia International Raceway near Danville, Va., for the Bosch Engineering 200 on Saturday, May 14, running in conjunction with the Rolex Bosch Engineering 250. Tickets are available at the VIR website ticket page.