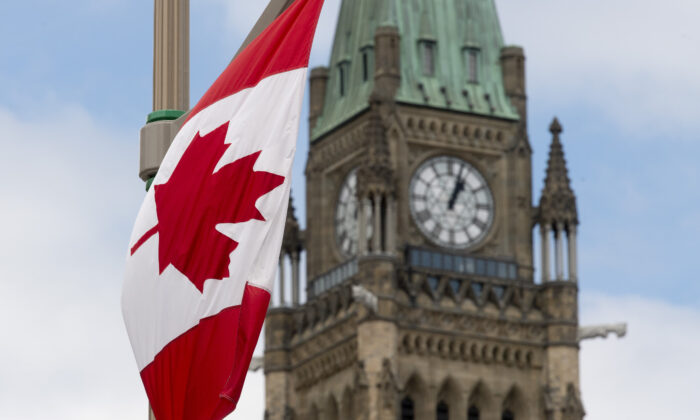 A Canadian flag flies near the Peace Tower on Parliament Hill in Ottawa on June 30, 2020. (The Canadian Press/Adrian Wyld)
Canada

In the fast-tracked conversion therapy bill that was passed into law last week, there were two significant issues that did not receive parliamentary oversight either in the House of Commons or the Senate.

One issue involves definitions in the bill, which proved contentious in the House of Commons in the first incarnation of the bill in the previous Parliament. However, it never had the chance to be deliberated on in the Senate before Parliament was dissolved after the election was called.

The other was the expanded scope of the new bill to outright ban the practice not only for children but also for adults, despite Justice Minister David Lametti saying in the previous Parliament that such a ban for consenting adults might not withstand a constitutional challenge. This change received no debate or study in the House or the Senate before being passed into law.

Bill C-4, an expanded version of its previous iteration Bill C-6, was introduced by Justice Minister David Lametti on Nov. 29 and was quickly passed in both the House and the Senate on Dec. 1 and Dec. 7 respectively. This happened because the Conservatives introduced a motion to fast-track the bill without amendments, debate, or committee study.

In the previous Parliament, some Conservative MPs had warned that the broad definitions in Bill C-6 could potentially criminalize normal conversations between children and their parents, counsellors, or religious leaders about gender and sexual behaviours.

During a Commons justice committee meeting on Dec. 10, 2020, Conservative MPs Rob Moore and Michael Cooper proposed an amendment that “takes language directly from the justice department website” to be added to the bill to ensure such conversations aren’t criminalized.

Moore said during the meeting that the amendment “addresses some of the concerns we’ve heard from witnesses who are concerned about how broad the definition is.”

Moore’s proposal was rejected after a vote, with six of the committee members voting against it versus five who supported it. Bill C-6 passed its second reading on Dec. 11, 2020.

At its third reading on June 22, the bill was passed in the House, with a minority of Conservatives, 51 of the 113, including leader Erin O’Toole, voting for it.

The definition of conversion therapy voted on in the third reading—which is similar to the one in Bill C-4—is described as: “a practice, treatment or service designed to change a person’s sexual orientation to heterosexual, to change a person’s gender identity or gender expression to cisgender or to repress or reduce non-heterosexual attraction or sexual behaviour or non-cisgender gender expression. For greater certainty, this definition does not include a practice, treatment or service that relates to the exploration and development of an integrated personal identity without favouring any particular sexual orientation, gender identity or gender expression.”

Conservative MP John Williamson, who was among the 62 Conservatives who voted against Bill C-6, said after it passed third reading in the previous Parliament that the bill failed to “clarify parental rights with respect to their children,” and to ensure that “family discussions between parents and their children would be protected and not criminalized.”

“Unfortunately, the federal government declined to make this very reasonable change. Instead, it provided clarifications on the Department of Justice website that conversations between parents with their dependents would not be considered conversion therapy. However, the government would not add this reasonable language to its Bill, which left these concerns unanswered,” Williamson said in a statement on June 23.

When Bill C-6 arrived in the Senate, the Liberal government wanted the senators to pass it into law before recessing for the summer.

Several senators expressed frustration with the government’s “disrespectful attitude” in pushing them to approve the bill in such a tight time-frame, noting that the legislation required more in-depth study.

“A few times in this extraordinary era of urgent governance related to COVID we have been asked to suspend our rules and forgo our rights to fully exercise sober second thought on matters that are not emergencies and not related to the pandemic,” Sen. Scott Tannas said in a statement.

Bill C-6 did not make it through the Senate and died with the dissolution of Parliament on Aug. 15 when the federal election was called.

In the new Parliament, however, Bill C-4 was fast-tracked in the Senate without any debate or study of its clauses, having its first reading on Dec. 2, second and third readings on Dec. 7, and passing into law on Dec. 8.

Lametti: ‘I Fear a Charter Challenge’

While Bill C-6 banned conversion therapy for children only, Bill C-4 bans the practice for adults as well—even for consenting ones.

This contradicts a statement Lametti made a year ago, when he said the idea of banning the practice for adults was unconstitutional.

“I do fear a charter challenge,” the minister told the justice committee on Dec. 1. 2020.

“For an adult capable of consenting and who is not susceptible to duress and is not being subjected to duress, it would be a difficult thing to defend in court. The best minds in my department tried to wrap their heads around it and couldn’t.”

The constitutionality issue, and why Lametti changed his mind about it, was discussed neither in the House nor the Senate once the bill was introduced and subsequently passed into law swiftly in the new Parliament.