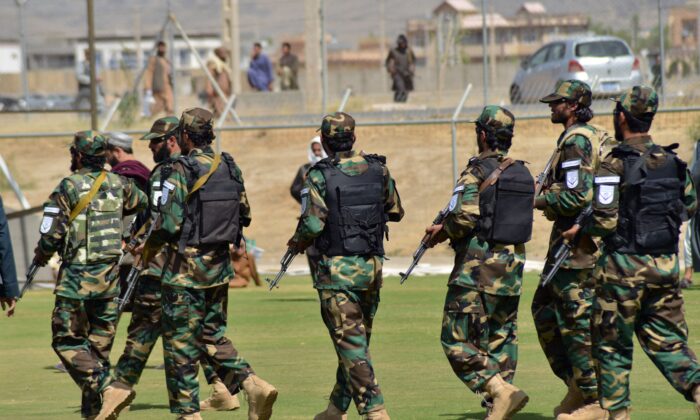 Afghanistan and Pakistan have a long disputed border called the Durand Line. Despite the Taliban’s close relationship with Pakistan, where most of its leaders were based before Aug. 15, the group has said that the Afghans don’t agree with the Durand Line.

Experts say the Taliban’s statement is an indication of the continuity of the so-called Great Game that has defined the geopolitics in the region, which started with threats to conquer British India in 1798. The Durand Line was created to stop those threats.

The Durand Line is a 1,660-mile-long boundary drawn by colonial Britain that pushed 40,000 square miles of Afghan territory into colonial India’s map in 1893, sealing the boundaries of Britain’s most prized, economy-driving colony from anyone who was their enemy, according to Ambassador Rajeev Dogra, the author of the acclaimed book, “Durand’s Curse: A-Line Across the Pathan Heart.”

“Ever since, Afghan governments have protested against it because the line goes against historical tradition and by law is illegal,” Dogra told The Epoch Times in an email.

“Moreover, it was drawn arbitrarily, dividing families and people’s lands. That’s why the Pashtun people resent it, and as far as they are concerned, they carry on with their family linkages as before, through marriages and by trading with each other.”

After the British left the Indian subcontinent in 1947, the contentious territory became Pakistan’s property, and today constitutes a significant percentage of it.

That same year, the Afghans demanded a revision of the border with Pakistan, but were denied. Consequently, Afghanistan was the only member nation in the United Nations that voted against Pakistan’s membership, according to a report by Vinay Kaura of the Middle East Institute.

Before the Durand Line was drawn by the British Foreign Secretary Mortimer Durand, the British and Afghans would often run incursions into each other’s territories, stirring up serious border tensions.

These border tensions have continued since then between the Afghans and the Pakistanis, including a serious conflict between the ousted Afghan government and the administration in Islamabad after violent clashes at a border post in 2017 left 13 dead and 80 injured.

Pakistan started a fence along the Durand Line in 2017 when militants repeatedly launched cross-border attacks on Pakistani posts. The double fence, which is about 13 feet high, is 90 percent finished and expected to be completed next summer, although the Taliban has expressed concerns about it.

“The Afghans are unhappy and oppose the fencing. The new Afghan government will announce its position on the issue. The fencing has separated people and divided families. We want to create a secure and peaceful environment on the border so that there should not be any need to create barriers,” Taliban spokesperson Zabihullah Mujahid said in an interview with Pashto TV, a Pakistan media outlet.

Dogra said it must be remembered that the Taliban are mainly of Pashtun origin.

“They have made it clear that they do not accept this artificial line which divides them,” he said.

However, Abhinav Pandya, CEO of Usanas Foundation, an India-based think tank, and the author of “Radicalization in India,” told The Epoch Times that the Taliban’s opposition to the Durand Line is for domestic consumption of Afghan nationalist sentiment.

“In Afghanistan, ethnic and nationalist identity is a very crucial factor. The Taliban claims to be the freedom fighters who expelled the foreigners. At this stage, they do not want to expose themselves by toeing Pakistan’s line on the Durand Line. If they do, they’ll be exposed as stooges and proxies ruling Afghanistan under the control of the foreign power Pakistan,” Pandya said.

Dogra said that to understand the Durand Line, one has to understand the Great Game that brought about fundamental changes to the power equations of the world, because it began the decline of Great Britain as a global power.

“It also was the beginning of Russian revisionism, leading to its expansion into the Soviet Union,” he said, adding that the Great Game started “innocuously” in 1798 with a letter by the Afghan Amir (King) Shah Zaman to the Governor-General of India, Richard Wellesley.

“Shah Zaman wanted to send a military expedition to North India to drive out the Maratha army. In this, he had sought the British help. But rather than reflect calmly over the proposal, Richard Wellesely started having nightmares about wild Afghans descending from the mountains and causing mayhem in India,” Dogra said.

“Wellesley had historical reasons to be alarmed, because the Mongols, Huns, and Mughals had invaded and plundered India through the same mountain passes. To keep the Afghan amir away, the British approached Iranian ruler Fath-Ali Shah, but involving him didn’t end their troubles. By this time, Napoleon and the Russian czar wanted to march into India through the land route that came through Afghanistan,” he said.

While Napoleon finally abandoned his plan, the British imagined there was a threat from the Russian czar, whose territory was 2,000 miles away.

“This was just the opening that some ambitious young British officers needed for adventure and to further their career prospects. The ‘Great Game’ was started then to ward off the imaginary Russian threat.

“It ended in 1893 when the British Foreign Secretary Mortimer Durand tricked the Afghan amir into signing an agreement by which he agreed to a rough line on a small map that became known as the Durand Line,” said Dogra, adding that, ironically, the amir put his signature on an agreement written in the English language, which he could neither read nor speak.

“Yet, in that moment of misjudgment, he gave away 40,000 square miles of Afghan territory. How and why he did so remained a mystery for over a century,” says Dogra, whose book “Durand’s Curse” addresses this mystery.

Taliban and the Durand Line

When the Taliban ruled Afghanistan for a short period in the late 1990s, Pakistan thought the group would support its claim on the Durand Line and would also control the Pashtun nationalism in the northwest frontier, thus providing an outlet for Pakistani Islamists, according to Middle East Institute’s Kaura.

“The actual result was the exact opposite. Categorically refusing to recognize the Durand Line, the Taliban went on to foster Pashtun nationalism, albeit of an Islamic character, which greatly affected Pakistani Pashtuns. The overthrow of the Taliban following the U.S. invasion in 2001 also transformed the nature and dimension of Pakistan’s Afghan policy. Pakistan’s pro-Taliban policy cost it the sympathy and support of the non-Pashtun tribes in Afghanistan,” Kaura said.

After 9/11, when Pakistan made a U-turn in its relationship with the Taliban, it cost them the loyalty of Pashtun clans in Afghanistan, he said.

Dogra said the Durand Line was never meant to be a border between Afghanistan and British India; it was supposed to be an “area of influence.”

“We should also remember that Pathans have for centuries lived with a code of honor called “Zan, Zar, and Zameen” (woman, gold, and land) as their only lodestars. So the loss of 40,000 square miles is as much a physical hurt as a loss of their macho pride. The Taliban want to erase this national insult,” he said.

The international community should step in on the side of justice, he said, and the United Nations should protect the Afghan interests on the Durand Line.

Pandya said even though the Taliban didn’t agree to the Durand Line in principle, the group never tried to “foment any anti-Pakistan unrest or revolt of Pashtuns” on the Durand Line.

“So this is just a posture to project moral face and show themselves as the champion of Afghan identity. I don’t read much into it,” he said. As a caution in understanding the Taliban position, Pandya said that Islam doesn’t accept the idea of nation-states.

“Entire ummah [the collective community of Islam] is one,” he said. “The Taliban believing in this radical Islamic ideology will have its impact on Pakistani society also, which is itself undergoing massive radicalization. Then we should not forget that Taliban religious ideology is Deobandi, which has a huge setup in Pakistan and is older than the creation of Pakistan.

“They may go out of the Pakistan army’s control. The sweeping jihadi radicalization will be problematic for Pakistan in the future.”