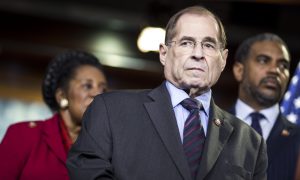 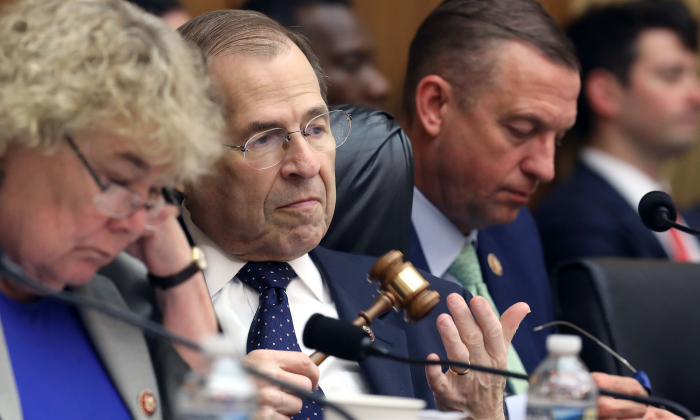 While the actual motive behind this decision is debatable—considering that Rep. Jerry Nadler (D-N.Y.) took a different position regarding contempt when it involved former Attorney General Eric Holder—the fact remains that Congress has several tools at its disposal to punish those who fail to comply with congressional subpoenas.

Notwithstanding this fact, Nadler and congressional Democrats likely will face some difficult hurdles if they try to pursue any of these methods against Barr.

“Every person who having been summoned as a witness by the authority of either House of Congress to give testimony or to produce papers upon any matter under inquiry before either House, or any joint committee established by a joint or concurrent resolution of the two Houses of Congress, or any committee of either House of Congress, willfully makes default, or who, having appeared, refuses to answer any question pertinent to the question under inquiry, shall be deemed guilty of a misdemeanor, punishable by a fine of not more than $1,000 nor less than $100 and imprisonment in a common jail for not less than one month nor more than twelve months.”

When Congress subpoenas someone to testify, the individual must appear (absent of a legitimate reason not to). As set forth in Lawfare, failure to comply with a congressional subpoena can result in serious consequences for the offender, including a finding of contempt. If Congress finds someone in contempt, Congress has several options.

According to Lawfare: “Just as the Supreme Court has long recognized congressional subpoena power, so too has it upheld the enforcement power of contempt. If a witness refuses to comply with a subpoena to either produce documents or testify, Congress has a few options: inherent contempt authority, the criminal contempt statute, and various civil enforcement mechanisms.”

The civil contempt route allows Congress to pursue civil remedies in light of the non-compliance. Many times, such civil remedies come in the form of a declaratory judgment action or a civil enforcement action, whereby the moving party asks the court to affirm the duty of the individual to comply with the subpoena.

In addition to the various civil enforcement methods, Congress may also utilize its criminal contempt powers. In such cases, once Congress votes to hold someone in criminal contempt, Congress would refer the matter to the U.S. Attorney, who would then decide whether or not to bring criminal charges.

While Congress has the power to enforce its subpoenas by way of the criminal contempt statute or civil enforcement, the circumstances surrounding Barr are more complex and will likely make enforcement much more difficult, due to the president’s recent assertion of executive privilege regarding the Mueller report and all accompanying documents.

As explained in a 2017 Congressional Research Service report:

“Although the courts have reaffirmed Congress’s constitutional authority to issue and enforce subpoenas, efforts to punish an executive branch official for non-compliance with a subpoena through criminal contempt will likely prove unavailing in many, if not most circumstances. Where the President directs or endorses the non-compliance of the official, such as where the official refuses to disclose information pursuant to the President’s decision that such information is protected under executive privilege, past practice suggests that the DOJ [Department of Justice] will not pursue a prosecution for criminal contempt. The U.S. Attorney would likely rely on prosecutorial discretion as grounds for not forwarding the contempt citation to the grand jury pursuant to 2 U.S.C. §194. …

“Second, although it appears that Congress may be able to enforce its own subpoenas through a declaratory civil action, relying on this mechanism to enforce a subpoena directed at an executive official may prove an inadequate means of protecting congressional prerogatives due to the time required to achieve a final, enforceable ruling in the case. …

“In light of these practical realities, in many situations Congress likely will not be able to rely on the executive branch to effectively enforce subpoenas directed at executive branch officials, nor will reliance on the civil enforcement of subpoenas through the judicial branch always result in a prompt resolution of the dispute.”

Nadler and other Democrats will find it difficult to pursue criminal contempt charges against Barr. Additionally, given the likely length and price of a civil action, this method could prove ineffective for Democrats who ultimately want to remove Trump from office.

According to Constitution Daily:

“In all, the House has brought four criminal contempt and three civil contempt actions against Executive Branch officials since 2008. In each instance of a criminal contempt citation, the executive branch declined to refer the charges to a grand jury.”

“In the three civil cases, the Congressional Research Service said ‘the committees involved eventually obtained much of the information sought through those lawsuits, but only after prolonged litigation.’ For example, as of March 2019, the dispute over contempt charges in the ‘Operation Fast and Furious’ subpoena involving President Obama’s Attorney General Eric Holder had still been pending resolution in court for six years.”

As a last resort, congressional Democrats could possibly turn to their inherent contempt authority. As explained in Constitution Daily, “Under inherent contempt proceedings, the House or Senate has its Sergeant-At-Arms, or deputy, take a person into custody for proceedings to be held in Congress.” However, this authority is very rarely utilized and “hasn’t been used in over 75 years,” according to Lawfare.

Therefore, if Democrats choose to pursue this route, they will be doing something that is extremely rare.

As is evident, Congress has several tools at its disposal to enforce a properly issued subpoena. However, the situation involving Barr and the president’s assertion of executive privilege will make enforcement more difficult.

Jason Chaffetz, a former Republican representative for Utah, wrote in a Fox News op-ed: “I believe Congress should, in fact, defend its subpoena power, but they need a winning case (Barr wins this case easily), and a principled backbone of consistency. America should not mistake this charade by the Democrats for a principled stand. Not when the principles shift with the political fortunes of the Democratic Party.’”

Elad Hakim is a writer, commentator, and practicing attorney. His articles have been published in The Washington Examiner, The Daily Caller, The Federalist, The Epoch Times, The Western Journal, American Thinker, and other online publications.