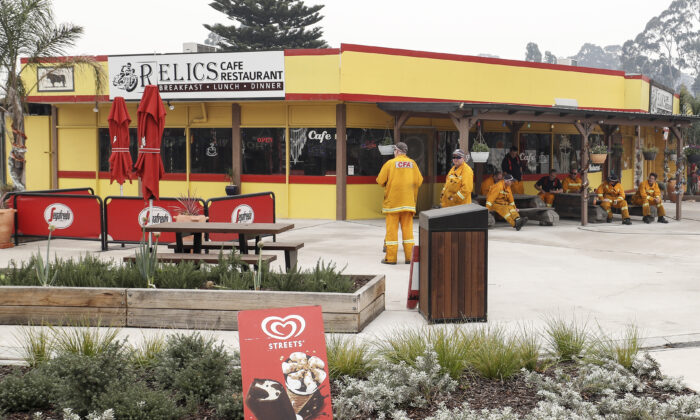 Strike team firefighters gather outside a cafe in Cann River, Australia, on Jan. 6, 2020. Milder weather conditions have provided some relief for firefighters in Victoria as bushfires continue to burn across the East Gippsland area, as clean up operation and evacuations continue. (Darrian Traynor/Getty Images)
Australia

Firefighters around NSW are enjoying a “psychological and emotional” reprieve from dangerous conditions before the return of warmer weather, with at least 1588 NSW homes destroyed this fire season.

More than 670 of those homes have been confirmed lost since January 1, the NSW Rural Fire Service tweeted on Tuesday.

At least 153 facilities and 3,122 outbuildings have been destroyed and a further 653 homes damaged during the fire season, with these figures likely to rise.

At 4am there are 130 fires still burning across NSW.

Even with the current conditions, including rain in some locations late yesterday, there are around 2,000 firefighters out working hard to protect properties and contain these fires this morning.#NSWRFS #NSWFires pic.twitter.com/7PfoH1WOPX

More than 13mm fell at Merimbula on Monday and 9.8mm at Bega in the state’s south.

“It’s not widespread amazing falls, but there is some falling from the sky,” Bureau of Meteorology forecaster Gabrielle Woodhouse told AAP.

Yet 130 fires continue to burn across NSW, with up to 50 uncontained and more than 2600 firefighters working in the field on Tuesday.

However, Friday’s weather is not likely to be as severe as last Saturday, when huge swathes of bush and hundreds of homes were razed on the south coast.

“While we want to bring a lot of the fires under control, what we’re still focusing on primarily is shoring up protection to limit the potential for fire fronts to continue to impact more communities,” Fitzsimmons told ABC TV.

“There’s a combination of suppression and mopping up and patrolling.

“It was nice to see a cyclone forming up the top end of Western Australia which is hopefully a signal that we may see monsoon activity which will disrupt the dominant hot air mass continuing to influence so much of the weather.”

Fitzsimmons said the navy ship HMAS Adelaide remains on standby and is assisting fire authorities with refuelling and resupplying.

NSW Transport Minister and Bega MP Andrew Constance, meanwhile, called on the government to get support staff into fire-ravaged areas as soon as possible as communities grapple with “unimaginable grief.”

Save The Children says it will roll out more child-friendly spaces to allow kids up to 12 to process their experiences with early childhood specialists.

Bundanoon couple Dianne Ross and Michael Hutchinson said evacuating on Saturday motivated them to make a plan to defend their home.

“We’re not going to play ‘we’re going to defend until the place is on fire’ but we’ll defend it as much as possible,” Hutchinson told AAP.

Ten people have died battling or trying to escape bushfires since Dec. 30, taking to 19 the number dead this season.

More than 6200 livestock are among millions of animals believed killed.

Some 4.8 million hectares—equal to the metro areas of the five mainland state capitals—have been burnt in NSW this season.

A person from south of Bombala in southern NSW remains missing.