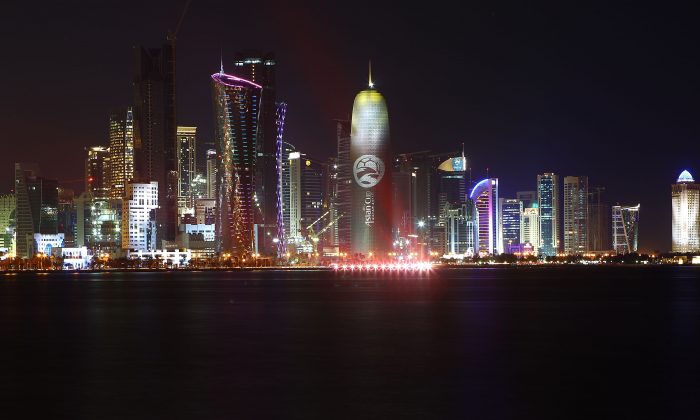 A general view of the city of Doha at night in Qatar on Jan. 10, 2011. (Robert Cianflone/Getty Images)
Viewpoints

The time has come to add tiny, gas-drenched Qatar to America’s list of nations to contain.

His conclusion: “[The] main element of any United States policy toward the Soviet Union must be that of a long-term patient but firm and vigilant containment of Russian expansive tendencies.”

Likewise with U.S. policy toward Qatar, which must contain the Gulf state’s jihadi tendencies.

The United States should begin by clarifying that it regards Qatar as a hostile force. A country of only 300,000 citizens, Qatar is so rich it ranks seventh in the world, above the United States, in GDP per capita.

As early as 2004, under Western pressure, Qatar set up a Financial Intelligence Unit (FIU)—but a decade after the FIU’s establishment it had not sanctioned a single Qatari for illicit funding, and only one financial crime had been referred to prosecutors.

In 2009, a U.S. diplomat wrote in a leaked cable that Qatar “will continue to be an inconsistent partner in combating terrorist financing unless continually prodded.”

By March 2014, an Obama Administration official openly acknowledged that Qatar “has for many years openly financed Hamas”—a US-designated Foreign Terrorist Organization (FTO) responsible for at least 557 terror deaths—as well as “support[ed] extremist groups operating in Syria” in a conflict that has killed more than 470,000.

In August 2014, an Israeli diplomat called Qatar “the Club Med for Terrorists” in the New York Times. That December, a study documented how “high-level terror finance networks with links to Qatari territory have benefitted al-Qaeda or other terrorist groups in Syria, Gaza, Somalia, Yemen, Egypt, South Asia, and Iraq.”

Worse, said the study, “With every important case of suspected terror finance involving a Qatari national in past years, the government in Doha has refused effectively to crack down.”

Dubbed “the most two-faced nation in the world” by a top U.S. official in 2014, Qatar has officially backed the U.S.-led coalition against Islamic State while tacitly allowing terrorist financiers to operate, and helping finance Islamic State, according to the report.

In June 2017, President Donald Trump correctly charged that “the nation of Qatar has historically been a funder of terrorism at a very high level.”

Yet minutes before Trump spoke, then-Secretary of State Rex Tillerson “call[ed] on the Kingdom of Saudi Arabia, the United Arab Emirates, Bahrain and Egypt to ease the blockade on Qatar,” imposed because of Qatar’s longstanding support for terrorism, with the proximate cause of a disputed statement by Qatari Emir Tamim bin Hamad al-Thani that there was “no reason behind Arabs’ hostility to Iran.”

Two weeks later, a State Department spokesperson pronounced herself “mystified” at the Saudis’ failure to produce proof of the terror funding the United States has had proof of for years, and perhaps decades.

She asked, “Were the actions really about their concerns regarding Qatar’s alleged support for terrorism or were they about the long-simmering grievances between and among” Gulf countries?

Such “long-simmering grievances” might include Qatari’s attempts to overthrow secular governments throughout the Middle East and North Africa and replace them with Islamic ones.

According to Kyle Shideler, an expert in Islamic networks, the blockade began in part because Qataris were using Islamist networks they had helped construct, “both violent groups and nonviolent or political Islamist groups, to try to overthrow a number of Arab states.”

Shideler charged Qatar succeeded in Egypt and Libya, and attempted to do so in Syria, with the “connivance of the Obama Administration, which had been convinced that democracy in the Middle East led by Islamist parties was the wave of the future.”

In part with sophisticated use of propaganda, Qataris “feel secure in the worst kind of bad behavior,” Shideler concluded, “pretending to be an American ally,” because so far they could tell the United States, “We have an airbase, and we help you bomb the bad guys—that we are also funding.”

It apparently worked again: By April 2018, the Trump administration was telling Congress it planned to approve a deal to sell $300 million in “Advanced Precision Kill Weapon Systems” to Qatar, including 5,000 high-explosive warheads and the same number of rocket motors.

The next day, Trump met with Emir al-Thani, praising him as a “great gentleman” and a “friend of mine.”

Predictably, seven months later, a Qatari diplomat appeared in the Gaza Strip with suitcases stuffed with $15 million in cash, which he delivered to Hamas leaders, approved by both the United States and the UN.

And just as predictably, days later Hamas jihadis attacked Israeli commandos in Gaza, killing an Israeli officer and wounding a soldier. In defending themselves, the Israelis killed seven terrorists, including a top Hamas military commander—to which Hamas and its allies responded by firing hundreds of rockets into Israel.

Such a pattern will continue to self-replicate indefinitely until stopped—and may not be stopped as long as the United States maintains a base in Qatar.

Accordingly, as part of a policy of containing the Gulf country, the United States should also order the withdrawal of all U.S. forces from it.

As of June 2017, Qatar’s propaganda arm, Al Jazeera, claimed the base had more than 11,000 U.S. and U.S.-led anti-Islamic State coalition forces from which more than 100 aircraft operate, figures confirmed by Military Times.

The Al Udeid Air Base is the first line of defense for Qatar in every disagreement with the United States. Bureaucrats in the Pentagon and State Department push back on any attempt to rein Qatar in by bringing it up.

Fair enough, Trump should say: Then it’s time to eliminate that liability.

But most important, the United States needs to get Qatari funding of the U.S. educational system under control.

According to one expert, “Qatar has become the single highest funder of American universities.”

The top recipient at over $332 million, Georgetown University, is home to the Prince Alwaleed bin Talal Center for Muslim-Christian Understanding, run from its inception by Dr. John Esposito, “a magnet for Arab and Muslim money.” Renowned Middle East scholar Martin Kramer once said that Esposito, “more than any other academic, contributed to American complacency prior to 9/11.” The Center’s flagship project is The Bridge Initiative—dubbed “The Bridge to Shariah Initiative” by the Center for Security Policy.

The next two top recipients are Northwestern University ($277 million) and Texas A&M ($225 million). A&M is currently in the middle of a legal battle over release of its contracts with Qataris.

What they contain is a mystery, but a clue might be found in the materials underwritten by the Qatar Foundation International (QFI), an affiliate of the Qatar Foundation (QF), given that QF provided 91 percent of the funds from Qatari sources to A&M from 2012 through June 2018, according to an Epoch Times analysis.

QFI’s flagship resource, the Al Masdar web portal, contains thousands of lesson plans about the Arabic language and Middle Eastern culture and politics. Among them are “Terrorist, Freedom Fighter, or Something in Between?” That in turn links to articles such as “Is There a Good Terrorist?”

According to one analysis, in the lesson plans “Israeli and American military forces are accused of terrorism, and the Iraq War was carried out to “feast on” the Iraqi economy.”

Worse, QF itself has “openly supported terror organizations and radical ideologues” and puts on programs with “viciously extremist speakers.”

Finally, at least one lesson plan, Express Your Loyalty to Qatar, openly espouses allegiance to the tiny Islamic dictatorship.

The U.S. government should consider a moratorium on all Qatari funding to U.S. universities pending a review of those materials.

It is past time for the United States to own up to the truth about Qatar: It leverages its vast wealth to undermine America and its allies at home and overseas including with outright violence and terrorism, while it leverages its key military facility and underwriting of U.S. schools to keep Americans in line.

It’s time for us to contain Qatar.

Christopher C. Hull holds a doctorate in government from Georgetown University. He is president of Issue Management, Inc., distinguished senior fellow at the Gatestone Institute, senior fellow at Americans for Intelligence Reform, and author of “Grassroots Rules” (Stanford, 2007).