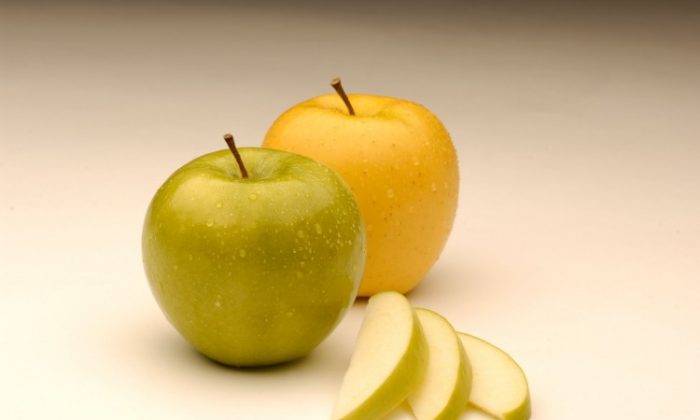 The Arctic Granny Smith and Arctic Golden, genetically modified apples developed by a B.C. biotech company, have been approved for growth and sale in Canada. (Okanagan Specialty Fruits)
Canada

In a notice posted on its website, Health Canada said scientific testing of the genetically modified (GM) Golden Delicious and Arctic Granny Smith apples “ensured the apple is safe for consumption, still has all its nutritional value, and therefore does not differ from other apples available on the market.”

Developed by British Columbia biotech company Okanagan Specialty Fruits, the apple, which doesn’t brown when sliced, will be the first GM fruit grown in Canada and the second allowed on the Canadian market after a Hawaiian-grown papaya. Last month, the United States also approved the two non-browning apple varieties.

We are not against any new technologies, but it has to be accepted by the general public.
— Charles Stevens , Ontario Apple Growers' Association

“Farmers don’t want it and consumers don’t want it,” said Teresa Lynne with the Society for a GE Free BC. “Since [Health Canada’s announcement] we have had shocked people on social media and some are already saying they will stop eating apples now because there is no labelling.”

According to the company, the apples will have a sticker bearing the “Arctic” logo, but critics say the fruit should be clearly labelled as genetically modified.

“There is already quite a bit of noise online with people already contacting their stores and there seems to be quite a few chains that say they won’t buy the apple,” said Lynne.

Fred Steele, president of the BC Fruit Growers’ Association, says the lack of clear labelling poses a challenge.

“Everyone has been saying since this began: ‘Let the market decide,'” he said. “If the market is going to truly decide, [consumers] need to also be informed about what they are going to buy. That would seem to constitute some sort of labelling. How would you decide on something you were going to buy if you didn’t know?”

A 2012 survey conducted by the BC Fruit Growers’ Association and the Federation of Quebec Apple Growers found 69 percent of Canadians didn’t want the apple approved. Other apple-growing organization in Nova Scotia and New Brunswick have also have expressed concerns over the GM apple.

Steele said it would pose a big problem for growers if consumers were to stop buying apples out of fear that some of them could be genetically modified.

“The situation is that we are fearful of a possible backlash, and that is the issue here,” he said.

“You can have this product available, but it comes down to who is going to grow it and what kind of distribution do you have? This is a long way from over and it’s not going to be solved overnight.”

Charles Stevens, chair of the Ontario Apple Growers’ Association, said there aren’t any plans as far as he is aware to grow the GM apple in Ontario, in part due to climate issues. Like Steele, he said that any growing of the apple will be dependent on the market and consumers.

“Genetically engineered is at the beginning of its livelihood. The market for sliced apples is your fast-food market and I don’t think there is anyone out there accepting genetically modified apples at this time,” said Stevens.

“As the public has more education on this and it is more accepted I believe we will adapt to produce some of these new technologies. We are not against any new technologies, but it has to be accepted by the general public.”